Having lensed a small chunk of footage featuring Aldo Ray and a bevy of babes on sets left over from Jim Wynorski’s The Lost Empire (1984) and the Roger Corman-backed Galaxy of Terror (1981) during the making of monster flick Biohazard (1985) (which, of course, also featured ol’ Aldo), Fred Olen Ray hooked up with Jack H. Harris, producer of The Blob (1958) and Equinox (1970), to complete futuristic women-in-prison caper STAR SLAMMER a year or so later. Harris had performed a similar service on John Carpenter’s Dark Star (1974) over a decade prior, swooping in and fleshing out Carpenter’s student piece to feature length before whacking it into distribution. Built from a script by Michael Sonye (who’d go on to work with Ray in various capacities on Sleazemania! (1985), Commando Squad (1987), Cyclone (1987), and a few more, but is probably best known for either writing Blood Diner (1987); voicing Uncle Impie in David DeCoteau’s Sorority Babes in the Slimeball Bowl-O-Rama (1988); or fronting cult shock-rockers Haunted Garage under the name ‘Dukey Flyswatter’), shooting on Star Slammer — then titled ‘Prison Ship’ — commenced right after Ray wrapped The Tomb (1986) and took place in an empty grocery store that had been converted into a giant soundstage.

Designed by Michael Novotny and Wayne Springfield with art direction by Maxine Shepard, the feel and tactility of Star Slammer’s mostly spaceship-based sets are astounding, and are captured by the keen eye of Ray’s former go-to cinematographer Paul Elliott (Biohazard, The Tomb, Armed Response (1986), and Cyclone). Described by Ray as being almost too good for the types of quickies the helmer was slinging together, Elliott’s lavish visuals — all smoke and candy-coloured highlights — exude a comic book vibe perfectly in tune with Star Slammer’s pulpy, serial-homaging atmosphere (the film is split into chapters, matinee-style — a flourish Ray was enamoured with at the time). The visual pomp extends to the costumes as well. Recycling a couple of outfits from Galaxy of Terror (the uniforms for the guards of the eponymous intergalactic big house) and Charles Band’s Metalstorm: The Destruction of Jared Syn (1973) (for Ross Hagen, in his first of a near innumerable amount of team-ups with Ray, as the film’s primary villain), every member of Star Slammer’s cast is gifted a distinctive cartoon-y look in keeping with their broad performances: puffed-up armor for the arrogant, peacock-like Hagen; effete pastel numbers for his snivelling henchman, played by Sonye; black leather and an eye patch for Dawn Wildsmith’s psychotic head guard; a dominatrix shaboodle for Marya Grant’s randy warden; and ragged, boobs n’ butt-enhancing numbers for the shapely inmates who’re led by Sandy Brooke’s Taura and Suzy Stokey’s Mike.

What plot there is total hooey. There’s hints at a kind of weird, junk-culture governed fascist state a la Stephen King’s 1982 novel The Running Man and its subsequent film adaptation in the form of televised communication with Lindy Skyles’ sovereign leader (whereupon he’s flanked by Bobbie Bresee from Mausoleum (1986) and Ray’s Armed Response and Evil Spawn (1987)), but the actual thrust of the narrative — some nonsense about crystals, Hagen’s revenge against Brooke for maiming him, and Brooke and co’s escape — is slim. Still, that’s not a bad thing. Instead, Star Slammer is better judged as an enjoyably silly but deadpannily delivered romp about the day to day grind of life behind bars… Just in space, obviously. It’s a hang-out movie in orbit, and Ray ekes a bucketload of entertainment from simply encouraging his high-energy ensemble to do their thing. And while the baddies, typified by Hagen and Wildsmith’s top-notch scene-chewing, get all the coolest bits, Ray ensures there’s always something going on to catch one’s eye or spark the imagination: from a mess-room catfight and a deathmatch with a toothy alien puppet recycled from The Deadly Spawn (1983); to the expected lesbian-baiting sexual tension, and some terrifically integrated stock shots half-inched from Corman’s Battle Beyond the Stars (1980) and Harris’ aforementioned Dark Star. 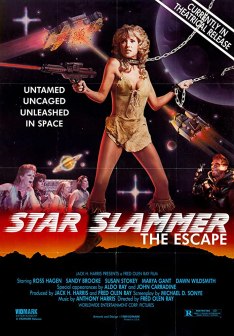