Dave ventures into the New York underground to get down n’ dirty with a not-so-titillating triptych.

Avon Studios were the fabled X-rated production house whose sordid output usually dove straight into their own theatre chain. Casey Scott of DVD Drive-In noted how the very name of Avon “is one whispered in tones of perversion and wonder by fans of Golden Age pornography”, such was the base notoriety of the company’s name.

You know a movie has a zero budget when the sound of a doorbell is someone in the crew muttering “ding dong”. Such an inauspicious beginning gives rise to the arrival of a pair of hoodlums who are looking for the man of the house – a busy pornographer (Martin Patton) – in order to settle a debt. In his absence the nefarious pair decide to rape his wife (Nicole Bernard), while in a parallel narrative we discover that the in-demand gentleman is indisposed at the behest of his personal assistant. Eventually the action switches to the smut peddlers office where this sleazy sextet (including his secretary) engage in further fornication under the guise of it being forced, albeit with minimal objection.

The second feature, DEN OF DOMINANCE (1983), shares both a similar running time (just under forty minutes) and a similar propensity for dominance, submission and comical gurning. Featuring Martin Patton once more, it’s set in a bar which happens to double as a sex club – but if anything it feels devoid of the sleaze that you might associate with Avon.

That’s no slight on what is unequivocally a fascinating insight into Avon Studios. It’s just having read about this fabled trash factor, I expected something a tad more depraved. But perhaps that’s a damning indictment on just where the bar is currently set with regard to our eroded purity with all things pornographic. 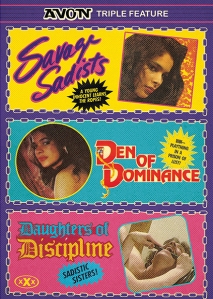