Matty dissects the debut feature of direct-to-video practitioner John Murlowski: a middling slasher with a few points of interest.

Before relocating to L.A. and racking up an impressive array of tasty B-movies that include the sturdy Amityville: A New Generation (1993); the rock solid, Olivier Gruner-starring robo-schlocker Automatic (1995); the wonderfully gripping Black Cadillac (2003); and, most recently, a spate of women’s thrillers for the Lifetime crowd, director John Murlowski made his debut with RETURN OF THE FAMILY MAN in his native South Africa. Bankrolled by David Pupkewitz and Marsha Levin’s Focus Films, who’d previously experienced a modicum of ratings success with TV drama Kolmanskop (1982); documentary Via Namibia (1985); and a filmed version of Dame Janet Suzman’s Apartheid protesting stage adaptation of Othello (which featured a powerhouse turn from South African theatre legend John Kani) after they were all broadcast on Channel 4 here in the UK, Return of the Family Man was a commercial undertaking for everyone. For Murlowski, it was a demo reel to get his foot in the door of the film industry, be it on his home turf or elsewhere. For Focus, an attractive, easily saleable horror flick for the international video market — though by the time Return of the Family Man was released in 1990, the slasher wave on which it tried to ride was well and truly over. As such, it quickly fell into obscurity. Still, for anyone looking for a film that serves as the middle ground between The Mutilator (1984) and The Stepfather (1987), and in its own quiet way prefigures the quirky randomness of something like Dr. Giggles (1992), Return of the Family Man is worth uncovering — even if, as a whole, it never rises above two-outta-five territory.

The biggest gripes are its lackadaisical pacing and see-sawing tone. The root of the problem is Murlowski and John Fox’s script, specifically its characters. Packed to the gills, Return of the Family Man’s dense cast of late teens/early twenties year-old victims are cut-outs at best and meat for the grinder/set dressing at worst. Bleached blonde punk Weasel (Adrian Galley) aside, none have any sort of identifiable trait; they’re literally just a procession of nondescript people hiding/holidaying in the boonies. However, such a total disregard for any kind of characterisation does at least have a small plus: none of the folks peppering Murlowski and Fox’s dawdling narrative are annoying. It’s a modest, accidental achievement, admittedly, but it’s just as well. After all, before the film really kicks into gear in its final third, we spend an age in their company as they play sports, hangout by the campfire, and pootle about the empty house and estate of a family-killing maniac called Mark Allen Shechter (a game performance from the late, great Ron Smerczak — a UK-born, South Africa-based actor recognisable for his bit parts in American Ninja 4: The Annihilation (1990), Cyborg Cop (1993), The Mangler (1995), and a couple of Operation Delta Force (1997) sequels, which were all shot in S.A.). The eponymous ‘Family Man’, the majority of anything involving Shechter is, without question, Murlowski’s strongest suit.

While the helmer never manages to balance Shechter’s more flagrant Freddy-esque flourishes with Return of the Family Man’s more serious and macabre moments (incidentally, Smerczak also gets a Krueger-style make-up job after his dead-eyed loon gets flambéed in an Elm Street (1984)-aping stretch with booby traps), Murlowski does exhibit a tremendous amount of flair in the straighter scenes of murder, mood, and creepiness. The image of the decayed remains of Shechter’s long dead clan sitting around a dinner table is spine-tingling, and Murlowski ekes some good quality shivers from simply letting his camera rest on Smerczak’s icy, purse-lipped expression. The standout, mind, occurs early on: wanting to make his way back to his ancestral abode to continue his murderous legacy, the sequence in which Shechter commandeers the prison bus that’s transporting him cross country is a thrillingly assembled burst of nastiness that atones for an unfortunate lack of gore with clever staging and a succulently mean spirit — especially when the Family Man finishes slaughtering the guards and turns his homicidal attentions to his fellow mentally disturbed lags. Hiding the ensuing carnage behind the now upturned bus, Murlowski’s ingenious but likely budget-governed blocking lets us fill in the blanks ourselves, rendering the deafening shotgun blasts and abrupt stopping of screaming all the more blood-chilling. 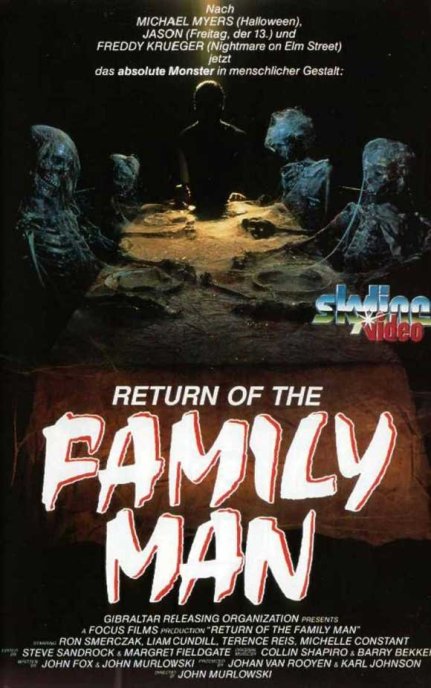