Matty walks the middle of the road with this Lance Henriksen-starring programmer from the UFO stable.

Lance Henriksen once said that he makes three types of movies: art, alimony pictures, and quick turnaround jobs in foreign countries where he’s picked up from the airport and taken straight to set to start working. Produced by Phillip J. Roth and Jeffrey Beach’s Unified Film Organization and directed by former company stalwart Christian McIntire (who, alongside directing Lost Voyage (2001) and Landspeed (2002), once served as staff editor, post production supervisor, and then, finally, head of production), ANTIBODY hits two of Henriksen’s categories. Like the bulk of UFO’s post 2000 output, it was shot in Bulgaria (so that’s one), but whether it’s art or alimony is a matter of personal taste — though Henriksen’s sleepwalking performance should tell you all you need to know.

While never boring, Antibody suffers from an unsure tone. The premise is great: Henriksen stars as a disgraced FBI agent turned private security specialist who, along with three others, is shrunk to microscopic size by a barmy scientist (UFO and Nu Image staple Velizar Binev) in order to traverse the bloodstream of a mortally wounded terrorist Fantastic Voyage (1966) style and deactivate a tiny nuclear detonator the bastard’s planted inside his body. Sadly, Michael Johnston’s script is too awkwardly poised between po-faced action cliches and kitsch sci-fi, and McIntire’s schizophrenic direction never seems to find any sort of comfortable middle ground. Sometimes it’s dour and deadly serious, others bright and playful. It’s the latter that yields the best results, especially in the colorful sequences involving Henriksen and co.’s minute craft, which has to navigate through pulsing heart valves, swathes of dangerous white blood cells, and fend off a tank-like skin mite. Without question, the digital effects are brilliant.

Cast-wise, beyond Henriksen’s deeply disinterested turn (for what it’s worth, he was the same in his previous pair-up with McIntire, the aforementioned — and superior — Lost Voyage), the bulk of Antibody’s ensemble are stilted beyond comprehension — particularly the harder-core Bulgarian members of McIntire’s troupe, who not only had to learn Johnston’s excruciatingly trite dialogue but suffer the ignominy of having to speak it, more than likely, phonetically. That said, credit to Robin Givens who’s clearly having fun with what she’s been lumped with and plays her part with tongue wedged firmly in cheek.

Antibody debuted as a SyFy Original on Saturday 8th February 2003 though fellow Brits of a certain age might remember it as a perennial on the shelves of Blockbuster and Global Video circa ‘04/’05 thanks to Third Millennium’s DVD release. 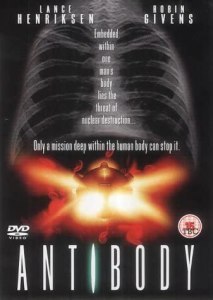