Camp, crazy, and with a convivial sense of humour, Dave discovers a rare jewel among the smut-filled shelves of the late ’80s.

In Barbarian, Dare is the leader of a tribe of women who rule over men and use them as sex slaves. However, she faces a challenge to her authority from Muriela (Nina Hartley), who pledges to put an end to her sovereignty. Naturally, the only way to resolve this conflict is to wrestle while semi-naked, and upon losing, Muriela is banished from the tribe – but vows to return. Add a host of other tangents to this tug-of-war, including an evil king (Randy West) who only has eyes for Barbara’s little sister, and you have a wild and raucous eighty minutes filled with pork swords and scandals.

Undoubtedly, one of the main draws to this cheap cut of smut is the presence of Gary Graver behind the camera as both director and cinematographer. Graver was winding down his adult work during this period in the hope of a mainstream breakthrough from Moon in Scorpio (1987) and Party Girls (1987), so Barbarian’s arrival marked the end of a lengthy first era in porn for the protean filmmaker. All of Graver’s hallmarks are here, though, from his winking sense of humour (“Don’t call me Babs!”) to his efficient and disciplined shooting style. Helping him are some striking (if occasionally wobbly) sets that go some way to masking the frugality of it all, but the sex is on point and harbours a feral savagery that makes up for any minor shortcomings. 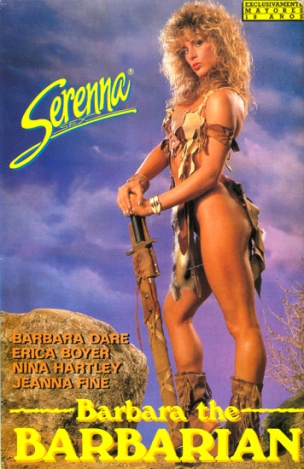