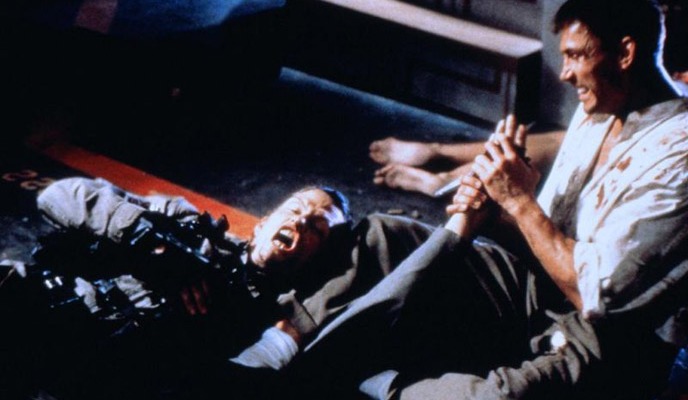 A former executive at HBO and, then, founder of ‘80s distribution company The Movie Store, Ken Badish entered film production in 1994 with the formation of Active Entertainment; a shingle that’s since had a hand in many of the best SyFy Originals (namely, Alien Lockdown (2004), Mosquito Man (2005), and SharkMan (2005)) and, most recently, a slew of Christmas slot fillers for Hallmark and Lifetime. Badish and Active’s maiden voyage, though, was AUTOMATIC — and, even some twenty-six years later, it’s tempting to rule this thrilling siege flick as the impresario’s crowning achievement.

Olivier Gruner’s third starring role following Angel Town (1990) and Nemesis (1992), Automatic finds the French kickboxer in similar territory to the latter, playing another cyborg against a snazzy cyberpunk backdrop. However, whereas Gruner’s character in Nemesis was a man whose cybernetic enhancements cause him to feel less and less like a human, here it’s the reverse, his disarmingly powerful arc seeing him evolve from machine to empathetic protector a la Arnie in Terminator 2 (1991). And where Nemesis was a sprawling, location-hopping tale, Automatic is pared down into what’s essentially a bullet-sprayed chamber piece. Set-bound but stylish, the story is thus: on the eve of their latest big announcement, a sleazy VP (Stanley Kamel) at tech conglomerate RobGen tries to rape a plucky PR assistant (Daphne Ashbrook) in his office but is thwarted and killed by Gruner’s titular, top of the line android servant. Attempting to cover up the impending scandal, RobGen’s deranged CEO (John Glover) sends in his private army, leading to Gruner and Ashbrook staving off and evading onslaught after onslaught of gunmen (commanded by the ever-excellent Jeff Kober — a phenomenal bastard) as they attempt to escape Kamel’s penthouse suite and, ultimately, the building.

It’s a simple scenario for sure, but one that hides a satisfying amount of wit and intelligence. Sharply written by Patrick Highsmith [1] and acclaimed Australian documentarian Susan Lambert, Automatic owes as much to RoboCop (1987) and Total Recall (1990) as it does to Die Hard (1988) and T2. Buoyed by a distinctly Verhoevean sense of satire, several screamingly funny vignettes and asides paint a vivid picture of the expansive world in which Automatic unfolds: a blackly comic dystopia overcome by corporate gerrymandering and hyperactive capitalism, where the haves are spoilt, lazy, and entitled, and the have nots — the proles gathered in protest outside RobGen’s HQ — are easily replaced by subservient yet increasingly sentient hardware. Naturally, the scene-chewing Glover is a great conduit for these ideas, and his villain schtick — a sort of darker riff on his Gremlins 2 (1990) turn; part Willy Wonka, part indefatigable gameshow host — is supported by a pair of fabulous stooges in the form of Troy Evans and Dennis Lipscomb, and augmented by John Murlowski’s vivacious direction.

Replacing scripter Lambert at the eleventh hour [2], Murlowski was drafted in by backers Republic Pictures due to his sterling work on their 1993 Amityville Horror (1979) sequel, Amityville: A New Generation. Thankfully, Automatic is hardly the slouch job such employment would imply . As mentioned, the film is full of life, and Murlowski has a tight grip on the blocking and shaping of each and every frenetic action sequence as people smash through windows, things explode, and Gruner boots, shoots, and blasts all and sundry. Equally impressive are Murlowski’s more classically-minded bits, the pockets of Automatic that rely on good ol’ fashioned suspense and tension — electrically-charged moments that are bolstered by the striking expressionist production design of Doris Sherman Williams (Platoon (1986), The Dark Backward (1991), and Murlowski’s Amityville).

Nearly perfect (as with John Eyres’ Project Shadowchaser (1992), Murlowski only drops a mark for failing to give Gruner a proper robo-schlock endoskeleton pop, despite parading a bunch of other very cool make-up effects [3]), Automatic premiered stateside on HBO on 8th June 1995 and hit U.S. video via Republic on 21st November. In Blighty, First Independent issued it on tape slightly earlier, in August ‘95 — which, incidentally, was the same month that Columbia/TriStar unleashed Phillip J. Roth’s fellow droid-sploiter, Digital Man (1995).

[1] Highsmith would go on to pen the Gruner vehicles Savage (1996), Mars (1997), Mercenary (1996), and Mercenary 2 (1998) which, alongside his scripts for The Outsider (1997), Acts of Betrayal (1997), and Legion (1998), were all produced by Automatic’s other producer, Avi Nesher.
[2] Originally intended to be her U.S. narrative debut, Lambert seemingly managed to shoot at least a couple of days of material: in addition to co-writing, she’s also credited as ‘Second Unit Director – Additional Scenes’.
[3] Courtesy of Albert Pyun favourite, David P. Barton.