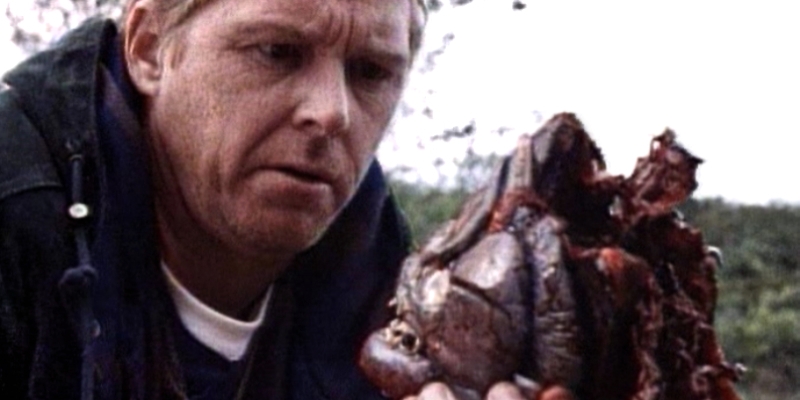 Joe Dante’s original Piranha is clearly the champion of its resulting five film ensemble, with Alexandra Aja’s 2010 3D redux barely off the pace, albeit a whisker ahead of James Cameron’s Piranha II: The Spawning (1981) and John Gulager’s 3DD (2012). So where, then, does that leave PIRANHA ’95, the bastard child of the quintet?

Scott P. Levy’s remake is exactly that – a carbon copy of Dante’s John Sayles-scripted ’78 masterpiece, which sees a private investigator team up with a hermit-like environmentalist to fend off an ecological disaster.  Same characters, same storyline, and even the same shots (Corman recycled the attack sequences from the first movie). But that was exactly the remit Levy was given for this entry in Showtime’s Roger Corman Presents strand, as screenwriter Alex Simon recalls:

“Roger told me to do an ‘update’ on Sayles’ text; a dialogue polish, [include] pop cultural references, make the scientist a woman, lose the random claymation dinosaur that never paid off (he hated that in the original). He also specifically said to add as much humour as possible. With those guidelines, the rest was left up to me.”

The main tweak is most noticeably the switch of location from Texas to Southern California, although it’s worth noting that William Katt and Alexandra Paul play very different versions of Paul Grogan and Maggie McNamara, and I’m tempted to say – whisper it – they’re more likable.

While Simon harbours a sense of satisfaction with the ninety-five page script he delivered, he can’t help but feel a pang of regret at the final cut:

“One of Roger’s compulsions, sadly, was to chop everything down to its shortest, most distilled version, even if it meant ‘fixing’ a film that wasn’t broken. Such was the case here. Without seeing the final version, when told it ran 95 minutes, he proclaimed “It should be shorter!” So they chopped ten minutes out, and as a result, a lot of the humour and updated character development that he requested is now gone. I had the long cut on a VHS dupe the director made for me, and it played very well. Maybe one day that version will get a Blu-ray release…”

Well, for now we have an abridged and bargain bucket release that’s coming up to two decades old, so while it’s far from being a collector’s edition that would showcase all the good things about Scott Levy’s movie (not least because of some superlative make-up work from John Carl Buechler), you’ll just have to trust me when I say that Piranha is far from the bland repetition that some may lead you to believe – including Mr. Gremlins (1984) himself.

“I’ve always heard that Joe Dante hated the original. In fact, I was supposed to have a meeting with Dante around 1997 or so about another script I’d written, but when he found out that I’d written the Piranha remake, he cancelled! I thought it was a real dick move to be honest, particularly as he’d also spent his salad days with Roger, obviously having to make compromises of his own. Some people seem to forget where they came from. But hey, that’s Hollywood!”