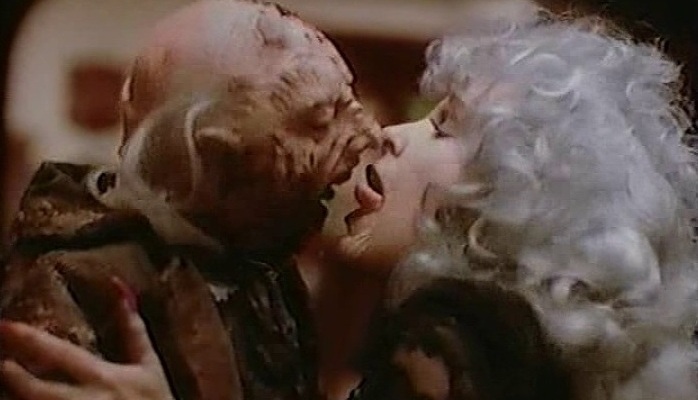 At the risk of blithely dismissing over one-hundred years of masterworks, in the pantheon of horror film influence, it’s always the usual suspects, isn’t it? The same ol’ (admittedly brilliant) texts, wheeled out time and time again by filmmakers when they discuss what inspired their work, for better or worse. What a joy, then, when something different is cited as a motivator. Something tackier and more low-brow…

Having scored a hit with Warlock: The Armageddon (1993) — which, while far from a box office smash, did excellent business on VHS — Peter Abrams and Robert Levy’s Tapestry Films were approached by Warlock: The Armageddon’s financier and distributor, Trimark Pictures, to make a ‘thing’ movie: i.e. a horror flick with a simple, high concept, Ronseal-esque title. Also part of this conversation was actor, writer, director, and general multi-disciplined B-movie journeyman Luca Bercovici. Bercovici had just completed the Tapestry-produced Dark Tide (1994) which Trimark’s video arm, Vidmark, had issued on cassette, and the Ghoulies (1985) and Rockula (1990) helmer was promptly hired to write and direct the script for a tongue-in-cheek shocker Tapestry stalwart Sam Bernard conceived called THE GRANNY (1995). And though Trimark would quickly renege their interest in the project, it was one of their biggest, if hardly illustrious, hits that was a vital component in shaping The Granny’s look, feel, and franchise potential.

Speaking to Fangoria during shooting, Bernard said that it was Trimark’s lucrative Leprechaun (1993) series that encouraged him to go the larfs-and-jolts route, his ultimate desire being to fashion The Granny into a three or four-strong saga [1]. That, of course, didn’t happen. Released on tape stateside by WarnerVision Home Video and here in the U.K. by High Fliers (as ‘The Matriarch’), The Granny never spawned a sequel. Instead, despite the film’s open ending, its eponymous geriatric menace joined Shocker’s (1989) Horace Pinker, House III: The Horror Show’s (1989) Max Jenke, and fellow mid ‘90s DTV aspirants Sleepstalker (1995), Ice Cream Man (1995), and Night of the Scarecrow (1995) in the single strike and done stakes before vanishing into obscurity. It does, though, remain a canny chamber piece well worth uncovering — primarily because Bercovici’s heady blend of Lep-lite kitsch with his own touchstones (Beetlejuice (1988)-tinged mirth; Death Becomes Her (1992)-ish cattiness; and William Castle-spiked ghoulish camp) is almost completely unlike anything else you’ll ever see.

Granted, employing such a tired and oft-used statement as ‘unlike anything else you’ll ever see’ to highlight that fact is a little off. But that’s the essence of The Granny: it’s predictable in its footing and structure yet totally — wonderfully — off in its delivery. At its core is a pulpy premise in which a shady dysfunctional family, gathered at their ancestral home for Thanksgiving, attempt to poison the titular crone in order to get their mitts on the rich old girl’s readies. Originally set to be played by the Academy Award-winning Shelley Winters, Stella Stevens was cast as the venomous, wheelchair-bound figurehead a fortnight prior to production when Winters was stricken with shingles [2]. To accommodate, The Granny’s start date was pushed back from 11th July 1994 to 8th August, putting further strain on a film already poised to stretch its low budget (“in or around” the $1million range — industry parlance for anywhere between $750,000 and the quoted price) and short eighteen day schedule to the limit. Thankfully, the delay was worth it. Cantankerous, volatile and as disgusted by her greedy, selfish clan as we are (“You’re a load I should have swallowed!” she barks at her son, Albert), Stevens is a hoot as Granny Anastasia, unleashing a hilarious tour de force turn. It is, mind, a performance that comes with a caveat — albeit a caveat that’s the key to unlocking and appreciating the rest of the film.

As with Robert Englund in Tobe Hooper’s much-maligned but actually quite brilliant Stephen King epic The Mangler (1995), Stevens’ snarling embodiment of Anastasia is nearly unpalatably absurd. Veering close to obscenity, it’s beyond scene-chewing and beyond pantomime; it’s as if Stevens has been beamed in from an altogether different orbit where irony, subtlety, and inference don’t exist. There’s taking it to the max, and then there’s Stella Stevens in The Granny. She’s the dramatic equivalent of having your face smashed in by a breezeblock covered in greasepaint, and it requires a discerning kind of ear, eye and taste to buy into her interpretation of Anastasia the second she appears on screen. However, if you submit to it, The Granny reveals itself as a hellacious sensory blitz; especially when Anastasia carks it at the dinner table, and returns from the dead as a demon-zombie-vampire creature-majiggy intent on fixing her deplorable kin for good.

Photographed by future Chris Nolan mainstay Wally Pfister on a seemingly permanent Dutch angle, The Granny emanates a big cartoon/Looney Tunes quality that’s bolstered by colourful costuming and a cornucopia of thrillingly tacky make-up FX once the gore begins to flow. Echoing Stevens, the remainder of The Granny’s ensemble get into the film’s crazed spirit. They’re not quite as abrasive, but Sandy Helberg, Patricia Sturges, Children of the Corn II’s (1992) Ryan Bollman, Playmate Heather Elizabeth Pankhurst, and Police Academy’s (1984) Brant von Hoffman [3] nonetheless feed into Bercovici’s blistering sense of madness, mayhem and anti-reality.

A tonal and rhythmic bedfellow to the full-throttle pace and gonzo grandstanding of The Texas Chainsaw Massacre 2 (1986), Death Machine (1994), and From Beyond the Grave (1996) (a trio of exhilarating frighteners united by their ‘grab you by the throat and drag you along for the ride’ mentality), The Granny’s stabs at meeting us in the middle amount to a pair of characters whose relatability to proper human behaviour is still suffixed by a whopping great ‘but’. First is Bercovici himself as the mysterious Namon Ami: an ageless sentinel summoned by Anastasia to provide her with an elixir that’ll allow her to live forever and, thus, prevent her parasitic offspring accessing her moolah. Alas, Ami’s cool demeanour and sharp, rational mind notwithstanding, he’s as kooky as Anastasia is, and it’s Anastasia’s breaking of his three-pronged, Gremlins (1984)-style rules that renders her a vessel to demonic interference upon her re-animation. The second is Anastasia’s kindly eldest granddaughter, Kelly. Ostensibly serving as our Sherpa, guiding us into the lunacy, Kelly is a splash of sweet in a sea of comedic bitterness — and, youngest grand-nipper Amy (Samantha Hendricks) aside, the sole person who genuinely cares about Anastasia and vice versa. Yet as engaging a presence as Kelly is, this supposed ugly duckling sure ain’t that. She’s essayed with palpably anguished vim by erotic thriller queen Shannon Whirry: a woman so beautiful that her casting is easily the strongest running gag in the film, the incongruous comments re: her allegedly grotesque appearance underlining Bercovici’s singular commitment to making The Granny as quirky a romp as possible [4].

[1] A Lethal Visit From The Granny by Marc Shapiro, Fangoria #144, July 1995.
[2] Strangely, Stevens stepping into The Granny’s shoes was predicted by a fortune teller years earlier, shortly after she’d wrapped filming on Sam Peckinpah’s The Ballad of Cable Hogue (1970). As Stevens explained to Michael J. Ankerich in a 1994 issue of Films of the Golden Age magazine (the full interview of which you can read here), the fortune teller informed her that she’d eventually lead a film where she’d replace another actress who’d have to abandon the part due to illness. “I waited throughout the ‘70s, through the ’80s, and it gets to ‘94,” the perennial supporting star and real-life mother of actor/B-movie mogul Andrew said. “I got a call from my agent who told me they had cast Shelley Winters in a film, but that she now had shingles and couldn’t do it. That’s how I was cast in The Granny.”
[3] As the aforementioned Albert; Albert’s shrewish wife Patricia; their smart-mouthed son Junior; their horndog daughter Antoinette; and Albert’s feckless younger brother, David. Cast-wise, trivia buffs might like to know that Warlock: The Armageddon‘s director, Anthony Hickox, cameos.
[4] Incidentally, Whirry had previously worked with The Granny’s above-noted DoP, Wally Pfister, on her signature opuses Animal Instincts (1992), Animal Instincts II (1994), and Mirror Images II (1993).