In the pages of Psychotronic Video circa 1990, a spat was brewing. Understandably vexed over a review in Psychotronic No. 2 that erroneously stated Fred Olen Ray had stepped in to “save” his directorial debut, EVIL SPAWN (1987), Kenneth J. Hall wanted to set the record straight. In a move of wince-inducing awkwardness, writer, FX practitioner, and all-round B-movie renaissance man Hall submitted a strongly-worded letter to the fourth issue of Michael J. Weldon’s beloved cult mag that accused Ray himself of being behind the spread of such misinformation. Ray responded in Psychotronic No. 5, where he poked fun at Hall’s catty tone and affirmed that, for better or worse, it was indeed Hall who should be credited with Evil Spawn. The truth, though, is somewhere in between; as with Tobe Hooper, Steven Spielberg, and the perpetually controversial Poltergeist (1982), Evil Spawn wouldn’t exist without either Ray or Hall.

Around the time of Commando Squad (1987), Fred Olen Ray was undergoing something of an existential career crisis. Not only was he unhappy with Commando Squad, an assignment he viewed as purely mercenary, he’d just thrown in the towel on a little $30,000, 16mm horror movie he was making then titled Deadly Sting: a loose, unofficial remake of Roger Corman’s The Wasp Woman (1959) that Ray started but was unable to complete as his heart wasn’t in it.

Fearing Deadly Sting was too amateurish — too big a step-back to the likes of The Alien Dead (1981) and Scalps (1983) — Ray agreed to stay on as a ghost producer but elected to pass the film’s reins to Hall, who’d designed the creature suit for Ray’s Biohazard (1985) and had penned the script for the helmer’s breakout hit, The Tomb (1986).

“Fred was the original producer/director,” scribbled Hall in Psychotronic. “George Edwards [the producer of Frogs (1972) and Ruby (1977)] scripted several unconnected scenes which Fred shot. After that he lost interest in it… Several months later, I was asked to finish it, writing a script around approximately five minutes of existing footage.”

Chief among that footage was a dialogue exchange between Dawn Wildsmith, the former Mrs. Ray, and the peerless John Carradine, culled from an infamous but incomplete Ray project by the name of Frankenstein’s Brain (1985). Having grafted with Carradine on the Florida set of Ken Wiederhorn’s atmospheric Nazi-zombie creeper, Shock Waves (1977), where Ray served as a still photographer and general dogsbody, and having directed him in The Tomb, Ray had struck up a friendship with the wily ol’ vet and was happy to throw Carradine a bone whenever the elderly star needed a day of employment. On top of shooting Carradine as a character called The Judge of Hell (material Ray would use in Star Slammer (1986) and his ‘Demented Death Farm Massacre’ cut of creaky ‘70s exploiter, Shantytown Honeymoon (1971)), Ray lensed Frankenstein’s Brain: a small, compact scene where a doddery Carradine nattered to a sneering Wildsmith about strange experiments and sinister plans before Carradine’s character — nominally, Dr. Frankenstein — quietly carks it. The idea was to twist Frankenstein’s Brain into a full feature: in addition to the Wildsmith confab, Carrdine recorded audio for a bunch of lines that would be dubbed over the rest of the picture, wherein the doctor’s eponymous organ would be shown sentiently floating in a jar. Ultimately, a feature length Frankenstein’s Brain didn’t happen. However, the footage was crafted to be vague enough to allow the ever-enterprising Ray to slot it into any number of projects, especially if they had a mad science hook like Deadly Sting did.

As with the Corman classic that inspired it, Deadly Sting centred on an aging woman whose desperation to regain her youth transforms her into a bloodthirsty hymenoptera/human hybrid. And in Ray’s early iteration of the film, the actual look of his ‘wasp woman’ was as flagrant a Corman homage as any, the buzzing monster rendered via the same sort of bug mask and furry gloves combo that Susan Cabot wore so iconically almost thirty years previously. In fact, prior to Hall’s involvement, Ray had even completed a poolside attack sequence that contained Deadly Sting’s original creature design. Sadly, a few behind the scenes snaps notwithstanding, this footage no longer exists — but Hall would reshoot the set piece apparently beat for beat in the film that Deadly Sting became.

That film is, of course, Evil Spawn.

Now, the reason for the title change is perhaps the root of Psychotronic’s confusion regarding the specifics of Ray’s input. Upon completion of Hall’s rejigged version of Deadly Sting, Ray was concerned that Corman was going to seek legal action against him, particularly as he’d unsuccessfully tried to launch a genuine remake of The Wasp Woman under the legendary maven’s auspicious guidance. As a result, during post production, Ray removed the more overtly wasp-y elements, changing the serum that causes the monstrous metamorphosis of minor scream queen Bobbie Bresee from a concoction fashioned from bee enzymes to a cocktail of extraterrestrial microbes, and adjusting the film’s moniker accordingly. Until Evil Spawn was settled on, other mooted titles included ‘The Wasp’ (which was ruled too on the nose still), ‘Alive by Night’, and ‘Probes From Outer Space’.

So, with that context-setting preamble out of the way, what, then, of Evil Spawn itself?

Well, in a fashion completely fitting of the whole “somewhere in between” thing I mentioned earlier, as a viewing experience, Evil Spawn is poised in that kooky strip of land that rests between badness and brilliance. It’s at once janky and sublime; the type of picture that many would term — forgive me, because I hate the phrase — ‘so bad it’s good’, but one that ought to serve as secret handshake for those of us who enjoy basking in the lurid delights of wild and wacky genre cinema.

Evil Spawn’s negatives are mainly due to Hall’s lack of technical finesse. An often ramshackle film, several already soft shots drop in and out of focus and blunt cuts smash into each other with as much grace as a pissed-up elephant. It’s also quite slow too, which is pretty alarming considering Evil Spawn is barely past seventy minutes. And yet, that said, there’s an unshakable je ne sais quoi to this seven day wonder; a certain lo-fi sense of vision and a definite scrappy power. For instance, as higgledy-piggledy as Christopher Condon’s photography is, there’s a modest, impressive comic book style to it. There’s colour and a pleasingly pulpy mood, and Hall’s reliance on unflinching close-ups imbues it with a uniquely intense atmosphere that flies in the face of his sloppy pacing. There’s an appealing air of craziness to Evil Spawn, and it’s augmented by a queasy score that’s all wailing synth stabs and Morricone/Thing (1982)-esque ‘dum-dums’.

Performance-wise, as well as the (presumably Ray-directed) mugging of the deliciously cuckoo Wildsmith as the film’s villainess, Evil Spawn benefits from a stunning central turn from Mausoleum (1983) babe Bresee. Despite Hall’s script occasionally coming across as an embittered therapy exercise (there are a boatload of digs at Hall’s old Ghoulies (1984)-era stomping ground, Empire Pictures, that seem a touch mean-spirited), there’s plenty of dramatic meat for the talented Bresee to sink her teeth into as her once hot actress character desperately tries to reclaim her vitality by any means necessary. Granted, it lacks the majesty of Rejuvenator (1988) — the other, vastly superior Wasp Woman retread of the ‘80s, which offered a sharper and more grimly effective exploration of faded silver screen glory. But Evil Spawn is nonetheless stirring, and it does harbour some very cool FX that are as equally satisfying as those in Rejuvenator.

Orchestrated by Hall’s fellow Empire alumni, Mike Deak, Thom Floutz, Ralph Miller III, and brother Cleve Hall, Evil Spawn’s grue is top notch. Naturally, the standout is Miller’s revamped, armour-plated creature suit. It’s obviously extremely wasp-ish, to the point where no panic-driven post noodling would disguise it, but, in terms of aesthetic, it’s wholly in keeping with the film’s garish texture and possesses a succulently weird rubberiness that would have really freaked you out if you saw Evil Spawn as a kid. The keen-eyed might also recognise a screeching, Poundshop-Halloween-decoration kind of effect in a tasty dream sequence: Hall would recycle it for David DeCoteau’s Nightmare Sisters (1988), which he wrote.

Evil Spawn was released on U.S. video by Camp in Spring 1988. Here in the U.K., it arrived on VHS via Mogul — who renamed it, again, to ‘Metamorphosis’ — in Autumn 1989, with twenty-one seconds of BBFC snips. Interestingly, in 1991, Ray opted to re-release Evil Spawn in altered form as The Alien Within. As Ray explains in the audio commentary on The Alien Within’s 2013 DVD (which houses Evil Spawn as an extra), Evil Spawn’s original foreign distributor had shafted his company, American-Independent, out of the money that they owed him for the film’s international sale. Ray took the distro to court and got the rights back but, by the time that happened, whatever cache Evil Spawn had as a saleable property had markedly decreased. Not wanting to lose any more money than he had already, Ray decided to fashion Evil Spawn into a brand new movie. Ray hired Ted Newsom and instructed him to shoot a bevy of fresh scenes on video in and around Ray’s Hollywood home (the bulk of which feature Ray mainstay Jay Richardson, and Ray’s then-beau, Suzanne Ager) and re-edit Evil Spawn to accommodate them. A scarcely-seen oddity, The Alien Within is worth a nod for its curiosity value. As a proper film, it’s lousy. Its clip is even slower than that of Evil Spawn and, besides the repurposed Evil Spawn footage and the engaging presence of Richardson in the Newsom stuff, it’s tough to recommend it beyond its status as a footnote. It’s basically B-moviedom’s answer to John Russo’s 30th Anniversary Edition of Night of the Living Dead (1968). 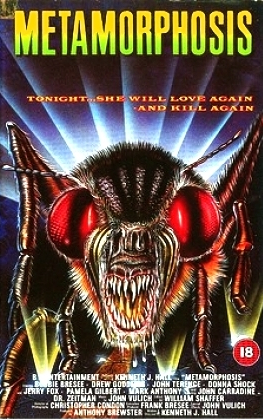