There are few films that embody cheap and cheerful as well as NIGHTMARE SISTERS (1988) does. Produced and directed by David DeCoteau, this sexy horror comedy was shot over four days on 35mm short-ends, with the ever-enterprising cult auteur taking full advantage of the production insurance left over from his ace vigilante thriller, Lady Avenger (1988). Budgeted at a measly $8,000, it’s poverty row for sure, and those with little affinity for DeCoteau’s already cash strapped resume would do well to steer clear. However, as a snapshot of the scream queen vogue of the late ‘80s – an age in which filmmakers such as DeCoteau, Fred Olen Ray, and Jim Wynorski littered the scare section of video stores the US over – Nightmare Sisters is an utter delight. In fact, it might just be the quintessential text in this bodacious B-movie epoch.

Naturally, it’s the queens at the film’s centre – as the titular ‘nightmare sisters’ – that are the key to its resounding success. Reuniting with Linnea Quigley, Brinke Stevens, and Michelle Bauer, Nightmare Sisters marks the second of four collaborations to date between DeCoteau and all three of the iconic starlets following the mighty Sorority Babes in the Slimeball Bowl-O-Rama (1988). Mining similar ‘co-eds in peril’ territory, the action this time finds the girls unleashing the spirit of a horny succubus (as opposed to a wise-cracking imp) during an impromptu séance, conducted via the cursed crystal ball of a gurning mystic (played by another Sorority Babes alum, the scene-stealing Dukey Flyswatter, whose band, Haunted Garage, also provides several raucous cuts on the film’s party-hearty soundtrack). Beginning as dowdy dweebs, a quick case of possession transforms the frumpy trio into slinky, demonic sex kittens – and in the process cements Nightmare Sisters’ status as the ultimate showcase for their inimitable talents.

It’s impossible to understate how good Quigley, Stevens, and Bauer are. Saddled with cartoonish bucked teeth, jam jar specs, and a fat suit, respectively, the girls exude an endearingly goofy charm during Nightmare Sisters’ loser-comedy set-up; so much so that DeCoteau simply locks off the camera and lets their hilariously downtrodden turns carry the early part of the picture. Mostly free of the opulent flights of fancy that would characterise the director’s later epics Puppet Master III (1991) and Skeletons (1997), as well as his aesthetically luxurious homoerotic programmers at the turn of the millennium (Ancient Evil: Scream of the Mummy (1999), The Brotherhood (2001) et al), DeCoteau’s meat and potatoes style here is a risky artistic choice – although a convincing case could be made that it’s more an obvious symptom of Nightmare Sisters’ impoverished making than anything else. Whatever the case may be, it’s hard to be too critical of DeCoteau’s minimalist approach when it’s supported by a trifecta of enjoyable performances.

Of course, while there are few who can deliver extended passages of ditzy dialogue with as much gusto as Quigley and co., the luscious leads of Nightmare Sisters truly come alive once they befall the succubus’ saucy influence. Slinking around in various states of undress, the sultry schlock sirens fizz with an intensely erotic allure as they seduce and slay the randy frat boys (one of whom being The Offspring’s (1987) C.J. Cox, who’d go on to pen the fluffy Reese Witherspoon vehicle Sweet Home Alabama (2002)) who’ve crashed the shindig that they’ve thrown for their equally geeky beaus. Despite said slaughter seeing the lads, well, having their dicks bit off, DeCoteau completely eschews the type of squirty gore that permeated his earlier succubus shocker, Dreamaniac (1986). Instead, the helmer uses the cheesy carnage of Nightmare Sisters to facilitate some top-notch T&A sequences, which includes a justifiably famous lesbian bathtub tangle – replete with comedy squeak noises – and a rockin’ musical number from Quigley among its bawdy, often surreal standouts. 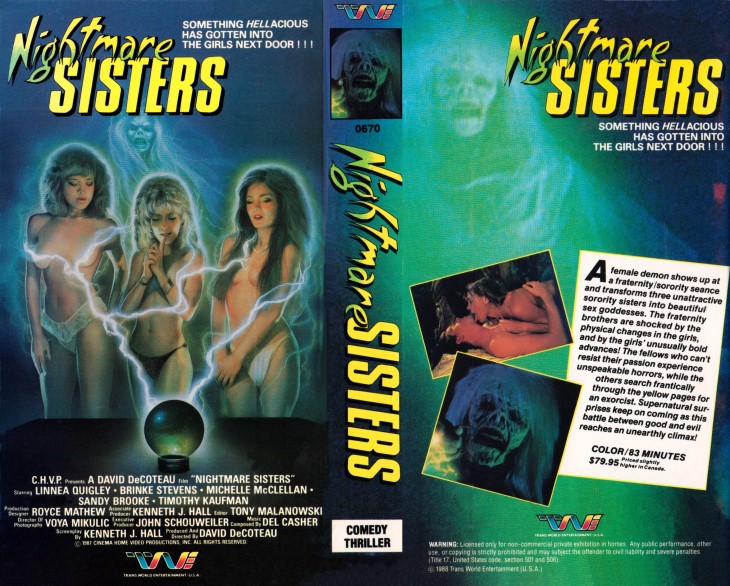 Last available on a Linnea Quigley triple feature DVD released by DeCoteau’s own Rapid Heart Pictures in 2013, Nightmare Sisters hits Blu-ray in grandiose fashion from Vinegar Syndrome. And as you’d expect from the peerless preservation specialists, a doozy of a transfer is the star attraction. Struck from Nightmare Sisters’ original camera negative, Vinegar Syndrome’s marvellous 2K scan is a sight to behold after years of discs sourced from fuzzy tape masters; offering the sort of visual presentation that’ll have you foaming at the mouth with violent orgasmic fury. A surprisingly colourful movie, Vinegar Syndrome ensure that the Suspiria (1977)-tinged touches of cinematographer Voya Mikulic’s candy-coloured lighting pop like never before, and the amount of hitherto unknown detail on display is fabulous – even if the film’s charmingly ramshackle FX work looks even chintzier due to the increase in clarity.

Extras-wise, Vinegar Syndrome port over the engagingly matey DeCoteau/Quigley commentary track from the Rapid Heart set, and the selection of bloopers that were previously housed on Retromedia’s 2002 DVD. Sadly, a pair of exclusive commentaries from the long out of print latter don’t make the jump across, but a brief, fact-filled intro from DeCoteau, and an excellent, eleven minute chinwag with the film’s gregarious writer, journeyman talent Kenneth J. Hall (The Clown at Midnight (1998)), atones somewhat. The cream of the crop, though, is the simply stunning inclusion of Nightmare Sisters‘ elusive TV cut, which is culled from an old VHS. Designed for the video market, the scarcity of erstwhile distributor Transworld’s initial cassette led to Nightmare Sisters‘ greatest exposure stateside happening via cable television, through the USA Network’s legendary Up All Night series. Playing the film on a steady rotation, it was, alas, a maddeningly censored version, with tamer, alternate footage – lensed a year or so later at the network’s request – clumsily replacing the spicier moments. Granted, nixing the smut undoubtedly robs Nightmare Sisters of its purpose. But watched back-to-back with DeCoteau’s intended vision, this softer, cobbled together variant is a fascinating piece of genre flick history and a welcome addition to a stupendously recommendable Blu-ray package. 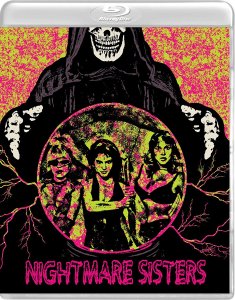 NIGHTMARE SISTERS is out now on region-free Blu-ray, via Vinegar Syndrome