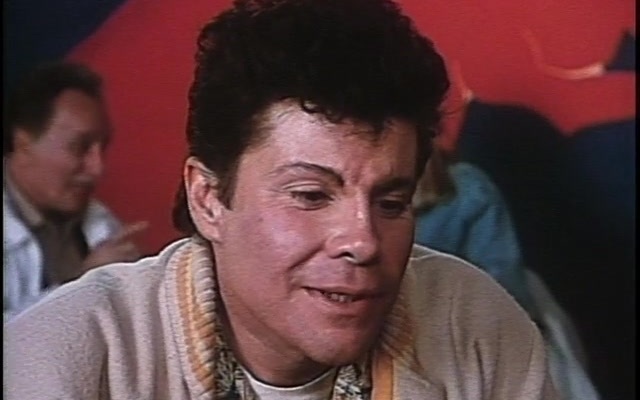 Mario Romeo Milano is somewhat of an enigma.

He’s certainly not the Italian-born, six foot five inch pro-wrestler that IMDb seems a little befuddled by. Let’s say he’s more of a diminutive, fifty-something love child of Tony Curtis and Richard Grieco, with eyebrows plucked to within an inch of their life.

Appearances aside, Milano’s only film credits lie within the bewildering entity that’ is NERDS OF A FEATHER (1989). Producer, lead actor, writer, co-director and music guru of title track Flyaway, the wee fella certainly showed ambition in putting together this passion project, even if the result is an unmitigated mess.

Pat McCormick (instantly recognisable from playing Big Enos in Smokey & the Bandit (1977)) is Professor Yuri: a Russian scientist who’s just developed a hotly-desired life extension formula. With the Kremlin keen on seizing this potent discovery, Yuri escapes to the United States dressed as a cow to hide out at the California home of his sister, the fortune-telling Granny Greenberg (played by legendary female impersonator, Charles Pierce).

Tenuously connected to these Bond-style spoof shenanigans is Milano’s Peter Lawson: a man about town who harbours rock star ambitions, and possesses a dress sense that even Liberace would wince at. He’s fallen head over heels with Jennifer (Kathleen Conway – fresh from the set of three successive Larry Cohen movies), who not only is Yuri’s niece, but she’s about to unwittingly lead our hero deep into the realm of international espionage and a rabid army of dwarfs.

I’ve probably done a great service to Milano there by making his movie sound far more coherent than it actually is, because in reality it’s a disjointed ninety minutes that too frequently feels like two separate pictures running concurrently. Indeed, when you’re citing Lampshade the talking dog as a notable highlight, alongside a sweeping musical interlude by the late Linda Lawley (Let the Love Begin), you know you’re reaching for compliments. .

Gary Graver shares a co-credit with Milano for directing the film, and it’s clear that much of the praise for getting anything remotely digestible on screen should lie squarely at the foot of Orson Welles’ right hand man. He’s given a helping hand, though, by an ensemble of quirky cameos, many of which have Graver’s fingerprints all over them. From Charles Dierkop’s burly biker, to George ‘Buck’ Flower’s crumpled bed patient, to an all-too-brief John Phillip Law cameo (not to mention family spots from son Chris and wife Jillian Kesner). It’s obvious that the prolific filmmaker was on this show to be more than just set dressing.

Troma picked the film up for distribution, and today it’s still available to stream for free on their YouTube channel. Meanwhile, Milano disappeared for the best part of a decade, eventually resurfacing at the turn of the millennium with a book titled When Women Ruled. Described as ‘a fictional prophecy about women’s liberation in the new century’, it features a familiar lead character by the name of Peter Lawson – ‘a sensitive, idealistic dreamer in his mid-twenties’. 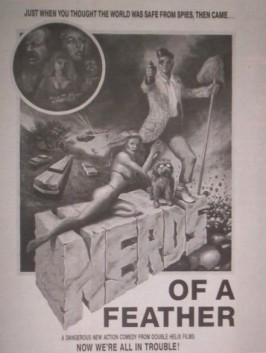