Another lip-smacking slice of vintage Van Dammage, Matty surrenders to the charms of the cult, Albert Pyun-directed robo-schlocker.

Poison was the word Menahem Golan, one half of iconic ‘80s studio Cannon, used to describe Jean-Claude Van Damme after witnessing the disastrous first cut of Bloodsport (1988). Declaring the film terrible and adamant that it would be dumped straight-to-video, Golan was as equally insistent that Cannon would never work with Van Damme again, despite them signing the Belgian bruiser to a three picture deal. However, in the gap between Bloodsport’s first cut and its eventual theatrical release — a period that ranges from nine months to two years depending on who you ask — two things happened. One was that Van Damme plied his trade with other independent companies, flying out to Malta to play the villain in Eric Karson’s stodgy spy caper Black Eagle (1988), and getting the ball rolling on Kickboxer (1989) with Bloodsport’s producer, Mark Di Salle, who was still rightly convinced that Jean-Claude Van Rookie had the potential to be a star. The other was that Van Damme had, amazingly, persuaded Golan to let him re-edit Bloodsport. In no uncertain terms, Van Damme’s new cut of the picture slapped harder than a Harlem pimp. As Bloodsport’s writer, Sheldon Lettich, has been quoted as saying it was suddenly very obvious that Bloodsport could be a massive hit.

And a hit it was. Shot for buttons (again, as with its shelving, the film was budgeted at anything from $1.5 to $2.3million depending who you talk to), Bloodsport generated an impressive $50million at the U.S. box office. Practically overnight, Van Damme was poison no more — and for the tempestuous Golan, he was to be the new face of Cannon. To that end, Golan quickly wanted to cash-in on Van Damme’s outstanding contract. For his second picture, Golan offered Van Damme the choice of the lead role in either The Delta Force 2 (1990), American Ninja 3 (1990), and Cyborg (1989).

At the same time as Van Damme was traversing Cannon, so too was director Albert Pyun.

Pyun had entered the Cannon fold pursuing more mainstream projects following the near career-wrecking production of his sophomore feature, Radioactive Dreams (1985), and after his third crack of the whip, Vicious Lips (1986), became, well, Vicious Lips. Pyun’s debut Cannon assignment was a for-hire gig as the helmer of Dangerously Close (1986): a serviceable high school thriller that led to Pyun calling ‘action!’ on pacey adventure yarn Down Twisted (1987), moderately enjoyable sci-fi comedy Alien From L.A. (1988), and a sequel to Alien From L.A. that was merged with footage from another film to make the awful Journey to the Center of the Earth (1988). Ruled a dependable set of hands, Cannon tasked Pyun with shepherding their mooted adaptation of Spider-Man, and writing and directing a sequel to their infamous 1987 fantasy, Masters of the Universe. The plan was to shoot both back-to-back, and costumes, sets, and props were built at a cost of around $2million. Alas, by this point, Cannon were on the road to ruin. And once Spider-Man and Masters of the Universe’s rights holders, comic book giant Marvel and toy giant Mattel respectively, pulled out, Spider-Man and Masters 2 went down the khazi.

Never one to waste anything, the ever-enterprising Pyun hastily cobbled together Cyborg, tailoring the script — which he wrote under the pseudonym ‘Kitty Chalmers’ — to fit all the unused sets, props, and costumes leftover from Spider-Man and Masters 2. Originally conceived as a vehicle for Cannon’s go-to hero, Chuck Norris, as Cyborg headed towards cameras, Pyun was told that it was going to be the perfect showcase for a hot new talent instead… 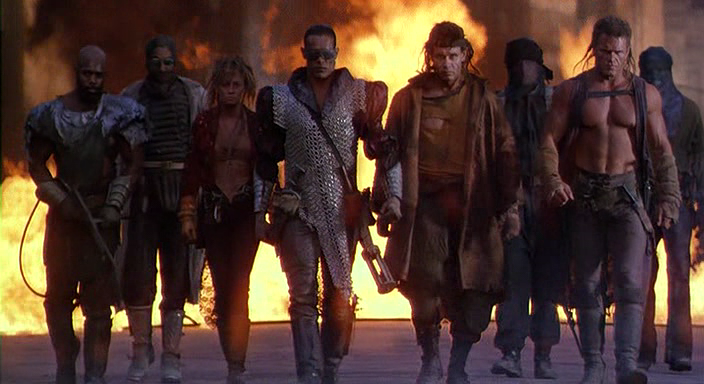 Looking back at the barnstorming Cyborg, it’s impossible to imagine anyone else playing the part of Gibson Rickenbacker than Jean-Claude Van Damme. Van Damme certainly does a better job than Norris ever could: there’s a mythic, Eastwoodian quality to Rickenbacker that the often overbearingly earnest Norris would be completely unable to capture. Fostered by Pyun’s intense close-ups on his mournful face, Rickenbacker oozes a spectre-ish essence; the stoic Van Damme is the embodiment of the character’s quiet fury as he walks a post apocalyptic East Coast, USA seeking the gang of violent marauders that murdered his surrogate family. There’s a sorrow and sadness in Rickenbacker’s eyes that Van Damme essays with authority, his internal suffering powering both his balletic martial arts in Cyborg’s stunning, biff-’em-up setpieces, and the softer, melancholic passages that bookend this impeccably staged carnage.

Enlightened, noble, and driven by personal anguish, Rickenbacker is a ‘slinger’. A mix of wandering samurai and old west shootist, a slingers are mercenaries — but as Cyborg rattles along, it’s clear that Rickenbacker isn’t so much hired as he is destined to protect what small pockets of humanity remain in a future-shock world that’s been ravaged by a deadly plague (!) and wanton barbarism (!!). Bolstered by Douglas Leonard’s gorgeously tatty production design, Cyborg radiates a tangible sense of desolation. As Pyun had previously proved with The Sword and The Sorcerer (1982) and Radioactive Dreams (and, of course, as the now legendary auteur would go on to prove again with his subsequent, similarly droid-centric sci-fi opuses Nemesis (1992), Knights (1993), Heatseeker (1995), and Omega Doom (1996)), he is a master at building fantastical yet real-seeming worlds on a shoestring. And in Cyborg, it’s a heady, atmospheric, and phenomenally immersive realm. A textured, detailed, and truly enveloping experience, you can feel the heat. You can smell the pollution piled in the streets. You can taste the charred stench of the perpetually burning trash fires. And there’s always something to see or stimulate: the colours of Philip Alan Waters’ lighting; the Anime-infused character designs, forever worthy of duplicated, daydreamed scribbles in school exercise books; the tempo-changing thrusts from epic swooning to gritty, in-yer-face savagery; the propulsive, full-throttle camerawork, which today should be referred to as quintessentially Pyun-esque (cf. further Albert A-graders Spitfire (1995), Adrenalin: Fear the Rush (1996), and Mean Guns (1997))…

The biggest reality check, though, is Cyborg’s bad guy, Fender Tremolo. Brought to life by a deliciously malevolent turn from Pyun perennial Vincent Klyn (Cyborg was the first of a whopping fourteen team-ups with the director), Tremolo is so lip-smackingly wicked — so diabolical — that he could only exist in a land as nightmarish and as chaotic as the vividly realised hellscape Pyun conjures here. The plot is thus: Tremolo has apprehended a cybernetic courier, Pearl Prophet (Dayle Haddon), on her trek from New York to Atlanta. Within Pearl Prophet’s data chips is a means to cure the above noted virus, and Tremolo doesn’t want that. “I like the misery,” the demonic motherfucker cackles. “I like this world!”. But having identified Tremolo and his gaggle of pirate droogs as the bastards responsible for the slaughter of his de facto clan, on Tremolo’s tail is Rickenbacker, his mission of vengeance inadvertently becoming an Armageddonous battle of good and evil with the fate of mankind hanging in the balance…

Ostensibly an endless procession of cat n’ mouse chase scenes (a Pyun staple), the beauty of Cyborg is that Pyun hides the film’s Christ/Saviour allusions behind a mask of potent simplicity — the sole exception being Rickenbacker’s rather on-the-nose crucifixion. That said, as a sensory-blitzing surge of pure cinema, the crucifixion sequence is a humdinger: poetic, almost, as Pyun frames a battered and busted Rickenbacker, strapped to and held aloft on the mast of a shipwrecked galleon, against a backdrop of bright sky and brilliant white sand. It’s a hypnotic and ghostly series of images, and this entire stretch is imbued with a soul-piercing air of volcanic tragedy as Rickenbacker is left to die alone, save for his heartbreaking memories — until he erupts, anyway.

Because as mentioned, Cyborg’s pleasures are less Herzog and much, much baser: they’re the film’s fleeting but exquisite robo-schlock FX, and its bone-crunching fighting. In regards to the former, Fantasy II Film’s stop motion visual trickery and Greg Cannom’s sterling practical stuff result in two of the most rewindable moments in the history of late ‘80s genre ware, pretty much securing Cyborg’s place at the top of the VHS-era robo-schlock pile due to the majesty with which they sell Pearl Prophet’s flesh-wrapped steel enhancements. They might be on screen briefly, but, alongside Jame Cameron’s The Terminator (1984) (which, incidentally, also housed craft from Fantasy II), Paul Verhoeven’s RoboCop (1987), and Ernest D. Farino’s Steel & Lace (1991), Cyborg defines the super-cool FX standard that fellow robo-schlockers like the Project Shadowchaser series; the Cyborg Cop saga; Pyun’s own stupendous tin-man legacy; and Cyborg’s own sequels must be judged by.

As for the latter — it’s self-explanatory, isn’t it? Every blow in this smorgasbord of destruction is a percussive seat-rattler and Van Damme’s leg-flailing elan is eternally fantastic. But what excites is how Van Damme’s flashiness is complemented by Klyn’s thuggish, brawling style. Klyn’s a lumbering, rough-housing brute, and his heavy-duty slugging pays dividends in Cyborg’s jaw-dropping close. The same type of brutal, quasi-biblical tussle that Van Damme would invoke for the finale of Universal Soldier (1992), his and Klyn’s climactic, rain-soaked mele is a rapturous and stakes-laden battering that, to this day, easily ranks among the best bits of both Pyun and The Muscles From Brussels’ filmographies.

Interestingly, as he did with Bloodsport, upon Cyborg’s completion, Van Damme found himself back in the editing bay. In Pyun’s mind Cyborg was a moody rock opera, and the version he tested in front of Cannon execs was presented in black and white and temped with an apparently speaker-shattering Def Leppard soundtrack. Naturally, Cannon were aghast. Catching wind of Cannon’s horror during the last days of Kickboxer, Van Damme was no sooner off the plane from Kickboxer’s Thailand location when he and Sheldon Lettich chained themselves to a flatbed for two months to recut Cyborg. Thankfully, Cannon were happy with the outcome — and having witnessed Pyun’s 2011 director’s cut, Slinger, I firmly agree with them. While a fascinating footnote in Pyun’s career, Slinger lacks the ruthless efficiency of Van Damme’s cut.

Cyborg was released in U.S. theatres on the 7th of April 1989. It grossed a tidy $10million, quadrupling its budget which, if you factor in what was spent on prep for Spider-Man and Masters of the Universe 2, was approximately $2.5million. Here in the U.K., it went straight-to-video. Shorn of over three minutes by the BBFC, Cyborg burst onto British shelves on the 23rd of February 1990, technically making it Van Damme’s first straight-to-video movie, ahead of Legionnaire (1998) and far in advance of Replicant (2001), the start of JCVD’s DTV run proper.