Matty sinks his teeth into an Empire Pictures classic.

Sitting alongside Re-Animator (1985) and From Beyond (1986) as one of the finest productions Charles Band bankrolled during what was arguably his most fructiferous era, PRISON is also the terrifying crown jewel in a loose, unofficial trilogy of supernatural shockers assembled in the dying days of the genre maven’s iconic studio, Empire Pictures. With David Schmoeller’s theological creeper Catacombs (1988) and Richard McCarthy’s horror western Ghost Town (1988) rounding out this impressive triptych of inadvertent interconnection, it’s Prison that lays the ghoulish groundwork, setting the tone with its mesmeric emphasis on place, mood, and spectacle.

Conceptualised by Band and Halloween (1978) producer Irwin Yablans, B-scripter supremo C. Courtney Joyner (who’d go on to pen Class of 1999 (1990) for Yablans, as well as a slew of ace programmers for Band’s later Full Moon Entertainment) spins a diverting yarn from their simple ‘horror in the big house’ premise. In it, a reopened penitentiary is haunted by the spectre of a lag put to death in the electric chair thirty years earlier, after his vexed spirit is freed from behind the bricked-up wall of the old execution chamber. Though Joyner never quite manages to tie Prison’s narrative together completely (for instance, the film’s biggest plot point, that of leading man Viggo Mortensen supposedly resembling the vengeful phantom, amounts to little more than a throwaway idea come the last reel), the writer’s intense focus on character and the grind of day-to-day life behind bars makes for compelling viewing.

Avoiding explicit exposition but revealing enough juicy titbits about each inmate to hook us in, Joyner’s words are tackled with aplomb by a remarkable ensemble cast. Exuding a wolfish charm, the aforementioned Mortensen does the whole antihero thing with an aloof cool, while Ivan Kane, Tiny Lister, André De Shields, and Tom Everett add a striking splash of colour. The real acting honours, mind, belong to two late greats: Lincoln Kilpatrick and Lane Smith, as a weary lifer and the slammer’s tetchy warden respectively. Anchored by a fascinating arc, Smith in particular plays a tremendous bastard, and director Renny Harlin has great fun pushing his character to the limit, twisting him from a stern taskmaster to a wildly out of control despot as the all too literal ghosts of his past catch up with him.

The American debut of Harlin, the Finnish helmer’s career post Prison has seen him take the reins of numerous high profile offerings, following it with the lavish A Nightmare on Elm Street 4: The Dream Master (1988) before graduating to the multi-million dollar likes of Die Hard 2 (1990), Cliffhanger (1993), and creature feature trendsetter Deep Blue Sea (1999). Watching Prison, it’s obvious why he’d be entrusted with such sizable projects. Eking immeasurable value from the film’s location (it was lensed at the historic Wyoming Frontier Prison), Prison feels much bigger than its modest “$4million” (read: half that) budget, and Harlin ensures every cent is up on the screen. Simply, his technical command of the film is stunning. From composition to colour, his atmospheric and richly textured style — augmented by Empire vet Mac Ahlberg’s gritty but delicate photography — is positively grandiose, and results in some unforgettably spooky images and a boatload of full-bodied scare sequences. Indeed, even if its story wasn’t largely well told or full of well-rounded, impeccably performed parts, Prison would be worth seeking out because of Harlin’s aesthetic prowess alone. 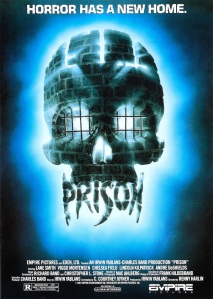