Dave catches up with helmer Richard Munchkin and gets the dirt on his distinguished ’80s thriller.

Ring of Fire (1991) and its awesome sequel, as well as Deadly Bet (1992), Guardian Angel (1994) and Fists of Iron (1995), ensured that Richard Munchkin was renowned throughout the early ‘90s as ‘Mr. Kickboxing’. If you rewind a decade though, you discover a director who’s more of a song and dance man, as his debut feature, DANCE OR DIE attests.

“Guys and Dolls I think it would be,” muses Munchkin from his Los Angeles home when asked about his cinematic influences. “Yeah, I started out in musical theatre so I’ll stick with that. Or maybe a romantic comedy.”

Whatever he settles on, one thing’s for sure: while attending acting classes with a certain Joseph Merhi back in 1983, martial arts movies were far from Munchkin’s mind.

“My original plan was to go to Los Angeles and be an actor as my degree was in theatre,” he recalls. “Once I arrived I kind of realised that acting in film and television was very different to acting in theatre. I was not enamoured with the business at all from that perspective. Meanwhile, Joe and I were writing a script together every day and he was busy trying to learn everything he could to do with the movie business. Once he started City Lights, I very quickly transitioned over into behind the camera work.”

City Lights were, of course, the precursor to PM Entertainment that existed during the mid to late ’80s. At the time, Merhi was busy topping pizzas in a fast food joint, but he had a mate who owned a 16mm camera by the name of Richard Pepin. Comedies were their first inroad into the business, but with the woeful Hollywood in Trouble (1986) sinking like a stone, it became clear that any prospective distributor was only looking to acquire films with an action lilt.

Mayhem followed in 1986 and despite its rough nature, you can begin to see the familiar elements of the Pepin-Merhi dynamic beginning to emerge. And more importantly it fit the action remit. For Munchkin, who was serving his apprenticeship via the art department, wardrobe and even catering, his opportunity with the pre-PM PM would come the following year.

“Normally, Joe would write and direct while Rick Pepin would shoot and edit,” recounts the Illinois-born filmmaker. “After a few movies Joe turned to me and asked if I wanted to direct one, so I said ‘yeah!’. At the time I knew that things would be much cheaper to shoot in Las Vegas than they would be in Los Angeles. So I specifically wrote Dance or Die with Vegas in mind.”

Key to the whole project though – and something that would dictate many a Pepin and Merhi production – were the specific places in which they were going to shoot. As Munchkin explains:

“We knew that the film had to have action, but the writing process was based predominantly around the locations that you could get. That was the key. How could we shoot it as cheaply as possible? And the key to that was find the locations first, and write around them.”

Dance or Die centres around dance teacher Jason (Roy Kieffer) who’s frantically trying to prep his troupe’s rehearsals for an important upcoming show. Having been sober for a short period, he’s taunted by his roommate, Alan (Jack Zavorak), who spends his days shiftily dealing coke out of their apartment. When Alan gets killed – in a spectacularly staged bloody massacre – Jason has to contend with a crew of gnarly traffickers who are convinced he’s hiding part of their stash.

Drug dealers, dance numbers and dream sequences surely should have no place in any film, be it a Pepin-Merhi flick or not. However, Munchkin’s bonkers thriller is such a trippy fusion of influences that you can’t help but feel a pang of adoration towards the utter insanity of it all.

“I had been producing dance shows from Las Vegas for Japan,” says Munchkin. “I had access to dancers and a choreographer and I thought I’ll incorporate dance into the movie. At the time, music videos were really popular and I quite liked the idea of doing that at some point in the future, so that was another reason to blend that aspect in.”

From a critical point of view there’s lots to take aim at. The suitability of Kieffer as a lead for a start – his performance is devoid of depth which sees you struggle for empathy – while his burgeoning relationship with “sexpot DEA agent” (according to the trailer) Diane (Rebecca Barrington) has as much spark as a damp matchstick.

The look of the film is flat and grey, which is a surprising when you consider the world of theatricality that we’re dipping in and out of. Granted, the production team were working with a crew of seven so it would be wrong to expect Cabaret (1972), but considering the vitality and drive behind the dance numbers it’s a wee bit disappointing not to have a little extra sparkle in the showpieces.

If you’re fully versed in the timeline of PM-era Richard Munchkin, and decide to take a trip down to the bowels of City Lights, the chances are that Dance or Die could very well leave you aghast. However, I defy anyone who reaches the final reel not to gaze in wonder at the mesmeric to and fro between the final dance performance and Jason’s pivotal face-off with drug kingpin Vincent. It’s a glorious moment set to a bombastic, eardrum-bursting instrumental that enables you to forgive the missteps that preceded it, as both narrative threads combine to leave you smirking with joy.

For Munchkin, it’s been twenty years since his last foray into film and television (he finished up with two episodes of PM’s small screen venture, L.A Heat (1996-1999)), and these days you’re more likely to hear him yelling red or black rather than action:

“I’ve always gone back and forth from gambling. It’s been my main source of income over the years. I never really made much money working for Joe [laughs]!”

But as Dance or Die demonstrates, what Munchkin did make was a myriad of video-era delights. And he made those in abundance. 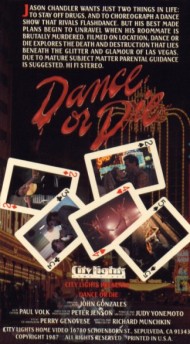