Dave Jay’s tremendous book Empire of the B’s: The Mad Movie World of Charles Band was a joy to behold last month upon its publication, but the one downside that accompanied this great work was the fact that many of the films mentioned are strangers to the UK home video market. After completing the book there was almost a sense of despair that so many of the films detailed were so hard to locate! Some of Empire’s greatest works – Zone Troopers (1985), Robot Jox (1989), Eliminators (1986) and Enemy Territory (1987) (and many more) – have frustratingly never been released on these shores since their ’80s VHS heyday. Thankfully, though, with companies like the awesome 101 Films managing to gauge just what the fans want, we can now cross Stuart Gordon’s excellent DOLLS off the list (as well as Cellar Dweller (1988) come May).

Fresh from his worthy success as director of Re-Animator (1985), Charles Band was keen to tie Stuart Gordon down to a multi-picture deal with Empire. Gordon, having had the idea for further Lovecraftian adventures with From Beyond (1986), was open to such a deal but Band insisted that beforehand he must tackle a quickie horror flick entitled ‘The Doll’. As Dave Jay noted in his book, the creation of the movie came from the crazy process that Charlie Band had of designing a poster then hiring a screenwriter to pen the film. A visit to the Empire offices from Ed Naha following the success of Troll (1985) soon spiralled into a swiftly knocked-up script for what became Dolls, then in late ’85 the relevant parties assembled for the shoot – and considering the pace of production, it turned out exceedingly well.

Narrowly avoiding running down some thumbing hitch-hikers (and by the shouts of “wanker” we presume we’re set the UK!), we’re introduced to the well-to-do couple of David and Rosemary Bower (Ian Patrick Williams and Carolyn Purdy-Gordon), who are speeding through the countryside on vacation. After managing to get their car stuck in the mud, they have no alternative but ask the proprietors of a local property if they could spend the night with the intention of getting help in the morning. As they walk towards the luxurious home we learn that the couple’s daughter, Judy (Carrie Lorraine), has quite the imagination, as following Rosemary confiscating her teddy bear she vividly imagines her cuddly toy coming back to life, eight feet tall and ripping her father and stepmother to pieces.

Once inside the lush abode they meet the kindly elderly owners Gabriel and Hilary Hartwicke (Guy Rolfe and Hilary Mason), who agree to offer them a bed for the night along with some food. Gabriel informs his guests that he’s a doll maker, and asks as to why Judy doesn’t have one for company, to which Rosemary swiftly interjects with an excuse – but not before Gabriel supplies her with a temporary friend for company in the shape of a Punch doll. The five quickly become eight, as also victim to the storm are the two hitch-hikers Enid and Isobel (Bunty Bailey and Cassie Stuart) as well as Ralph (Stephen Lee), the good-natured man who gave them a lift.

Gabriel shows everyone to their rooms where we then become party to the true nature of their the guests hidden agendas as we discover David and Rosemary are planning of getting rid of the burden of Judy, while Enid and Isobel plot to steal some of the “antikees” that fill the house – “they’ll be dead soon, they’re not gonna miss ‘em”. Thankfully the marionettes, puppets and dolls that feature in every corner of the residence are about to have the last word on these nefarious individuals…

Despite the rushed nature of the movie, I think Dolls turned out pretty darned fine. There’s an interesting blend of philosophies in the film from Ed Naha’s initial ‘old dark house’ leanings, to Stuart Gordon’s Freudian fairy tale influence, to Charles Band’s gore insistence – it manages to utilise elements of the three effectively. For me, the set that would eventually be used in From Beyond is perfect and does echo some classic horror scenarios with lightning relentlessly pouring through the windows, and flickering candles dominating the lighting in a number of scenes. Conversely, despite its 1940s origins, this is an ‘18’ certificate and quite justifiably! Some of the doll attack sequences are gruesome and disturbing while the work of puppeteer David Allen is joyously sinister.

With any film that is reliant largely on one location the cast are pivotal to its success and here Gordon has assembled an excellent ensemble, the stand out being his own wife as Rosemary who is deliciously spiteful playing the evil stepmother. Elsewhere, Guy Rolfe and Hilary Mason, who would do further work for Band are perfect as the old-fashioned but knowing proprietors, while Carrie Lorraine is the perfect embodiment of childhood innocence with Stephen Lee her childlike ally. Gordon directs with his usual assuredness and utilises the familiar Band crew of Mac Ahlberg as DP and John Buechler for makeup effects. The picture quality of the 101 Films Blu-ray is damned smart indeed, and having only been afforded a VHS edition up to now, watching the movie in such clarity is so far one of the thrills of 2014. There’s only one extra but it’s a goodie: a great, detail-packed audio commentary with Gordon and Naha. 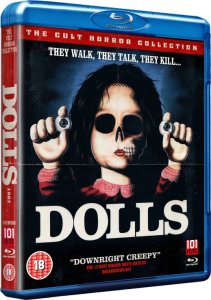 DOLLS is out now on UK Blu-ray via 101 Films