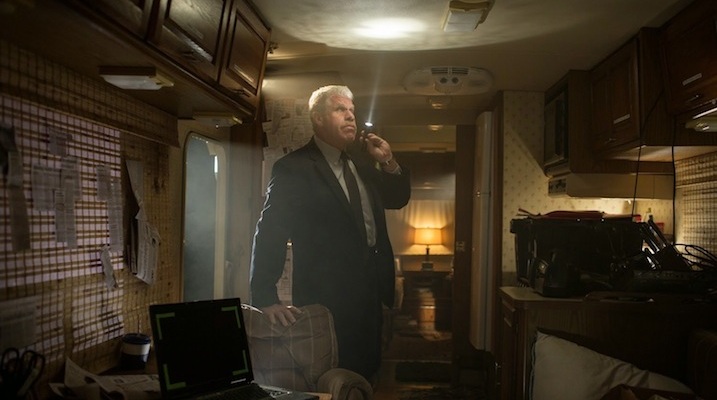 The turn of the century explosion of the Asian horror market and its subsequent invasion into Europe and America changed the landscape of contemporary horror. As expected there was a slew of English language remakes of these films beginning with The Ring (2002) and The Grudge (2004), but with the frenzied activity of horror film-making from this part of the world dwindling, the number of remakes have too. A pensive eye then is cast over the appearance of 13 SINS, a remake or ‘re-imagining’ (I despise that word) of the 2006 Thai horror movie 13: Game of Death. The original was a gore-fest par excellence with darkly comedic moments, appearing in the UK on the now defunct Revolver label. This US-made version of the film, however, was going to have a tough time reaching those heights, Ron Perlman or not.

Elliot Brindle (Webber) is deep in debt. Plagued by calls demanding he settle his outstanding bills, all his hopes are pinned on a possible promotion to senior sales representative. Sadly, what he expects to be a meeting to announce this is actually his line manager’s opportunity to dismiss him. “You’re too pure for this job, we take advantage of people here,” opines his boss. It’s true: Elliot does indeed seem too meek for the cutthroat world of sales, but now unemployed and with a pending wedding, a mentally disabled brother who is dependent on him, and an elderly father who lives in a care home – the pressure on him to bring home a salary is crippling.

One evening, though, Elliot receives a call on his mobile inviting him to take part in a “one of a kind gameshow”. He listens in shock as the voice on the line details the major incidents in his life such as his mothers’ sudden death as well and the precise numbers on just what he owes his debtors. The first task is simple – to kill a fly, and if he does so $1000 will be credited to his bank account. Disturbed by the information the caller holds on him Elliot is undoubtedly wary, but then upon checking his bank account online he sees that this mysterious individual may be indeed genuine. With challenge two completed (eating the dead fly) a further $3,600 is paid into his account to pay his partners credit card bill. This is too easy, surely? A further phone call informs him that there are eleven more tasks to undertake, and each one would be increasingly financially attractive. This game that Elliot has become the unwilling participant in however, is about to gradually become more and more twisted.

After watching 13 Sins I’m quite pleased that it actually only used the general gist of the Thai film, with (I think) only somewhere in the region of about three challenges making their way across from the original. This gave the film a different vibe, and with a few other alterations in the narrative the term ‘influenced by’ is more appropriate than remake, which should enable it to forge its own identity. A few reviewers have already noted the similarity in subject matter to the Trent Haaga-scripted Cheap Thrills (2013) which typically comes to the UK within a few weeks of 13 Sins – but having not seen that picture I can’t comment.

Despite a lack of love from this writer towards Daniel Stamm’s previous film, The Last Exorcism (2010), I thought 13 Sins was excellent. The success of 13 Sins rests solely on the shoulders of Mark Webber who really does bring an initial submissive timidity to Elliot. As the tasks keep coming his way, though, he assuredly develops his character into a whole new personality driven by the confidence that his anarchic behaviour has given him. Granted, the whole storyline is a ridiculous concept that defies plausibility, but as escapist entertainment it’s excellent fun. 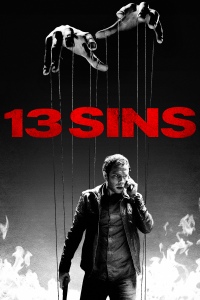