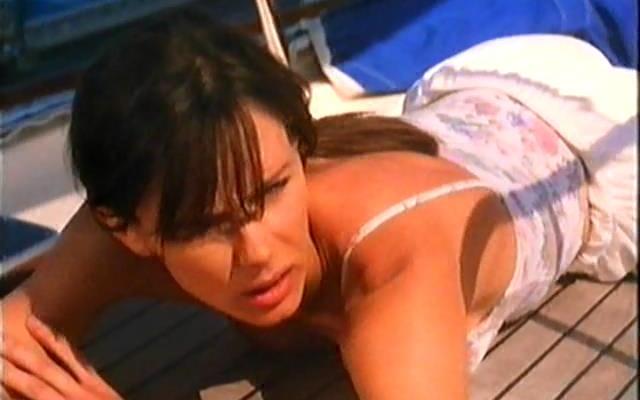 Dave boards a vessel in the Gulf of Mexico – but seasickness is the least of his worries.

“My finest performance, and there wasn’t even an audience.”

In her last line of the picture, Felicity Waterman nailed at least one of those assessments – but it certainly wasn’t the former.

UNLAWFUL PASSAGE sees her as Gale Browning: the soap-star queen of daytime TV show ‘Turning Point’, who boards a boat with her architect husband, Peter (Lee Horsley), in the hope of bringing a little more intimacy to their relationship. Fame has brought fortune, but it’s also fostered instability and envy. As Peter begrudgingly admits, “I knew you were an actress, but I didn’t know you were going to be a star.”

Nautical navigation is hardly their forte, so a stop in Cancun offers them the opportunity to hire the services of the somewhat shady Patrick (Leslie Ming) to help them sail back to New York. Unfortunately, this slippery sailor has other ambitions in mind. With his mate, Howie (William Zabka), in tow and two million dollars of Colombian marching powder on board, they commandeer the vessel, dump Peter overboard, and turn smugglers in a quest to get their stash to the States.

The thing with Unlawful Passage is that it seems like a relatively compelling prospect; a sort of duplicitous fusion between Gary Graver’s Moon in Scorpio (1987) and Jag Mundhra’s Wild Cactus (1994). Havana born Camila Vila is at the helm, director of serviceable horror flick The Unholy (1988), and scripting duty is handled by Peter L. Dixon. The author of twenty-eight books, Dixon’s blog promises ‘a fascinating journey into the world of writing and water-sports [!]’ – though he’s probably best known for co-creating the family friendly marine adventure series, Danger Bay, for CBC Television in Canada. Alas, his transition to grown-up fare is chock-full of clunky lines and hammy exposition.

To be fair, though, Waterman (who featured in Jim Wynorski’s misfiring western Hard Bounty (1995)) takes a bad script and manages to make it intolerable. Her delivery is shocking and only serves to highlight the flaws. She’s epically miscast in a role that demands the acting chops of a wily femme fatale able to turn the tables on these hapless hoods with the necessary guile. As for the others, Horsley is left drifting solo somewhere in the Gulf of Mexico, while Ming and Zabka do their able best but ultimately fail to hook you in to what’s a very disappointing catch.

Filmed on location at Puerto Isla Mujeres in Cancun, some vibrant sunsets and expansive exteriors captured by cinematographer Henry Vargas (Tollbooth (1994)) go some way to making this Central American excursion bearable. But by the time you’ve endured the looped-in deck dialogue and flailing flirtations for ninety minutes, chances are you’ll be struggling to find even the most incidental of compliments.

Also known as ‘Lost in Danger’.