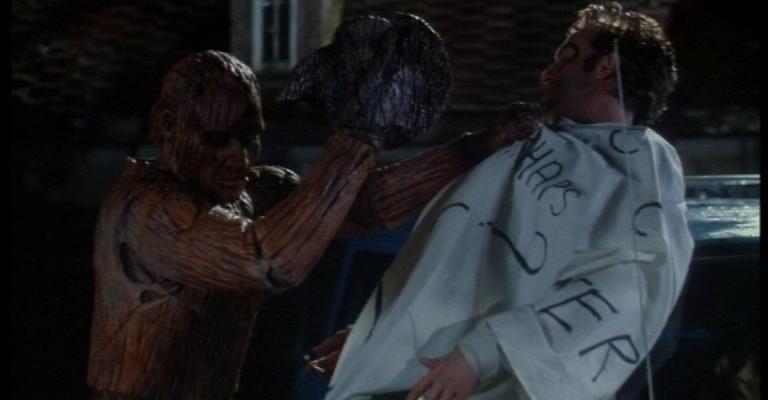 Could be better, could be worse. Matty settles down for an evening of serviceable slasher hijinks.

As executive producer and Devin Entertainment bigwig Greg H. Sims stated in his audio commentary on Vinegar Syndrome’s recent Blu-ray, The Fear did OK during its limited theatrical run in 1995 but found its most enduring success on video. A once common sight on video store shelves and a profitable renter, a sequel was inevitable — though by the time THE FEAR 2: HALLOWEEN NIGHT was released on either side of the Atlantic in October 1999 the genre landscape was a very different place.

Despite the first’s teen cast, and artwork that made prominent use of the film’s central gimmick, a creepy, life-size wooden doll called Morty that promotional materials loftily positioned as Freddy and Jason’s heir apparent — an aspiration furthered by the casting of Wes Craven in a cameo — The Fear was closer in tone to the psychological gamesmanship of things like Magic (1978) and Pin (1988) than anything slasher-y. After all, by the mid-’90s the form as popularised by the Elm Streets and the Friday the 13ths the decade before was well and truly dead in the water. However, come The Fear 2, slashers were a hot commodity again thanks to Scream (1996). Directed by the aforementioned Wes Craven, Scream ushered in a slew of imitators — and the influence of it and its brethren (I Know What You Did Last Summer (1997), Urban Legend (1998) etc.) hangs over this.

More of a hipper, streamlined reboot than a conventional follow-up, The Fear 2 is the sort of supernaturally-footed carve-‘em-up that the original film was touted as. Substantially less offbeat in terms of delivery but still appealingly weird in its foibles (LOVE the Native American mysticism), The Fear 2 is a better paced and slightly more entertaining standalone that passes muster as an agreeable bit of hokum. That said, those wanting at least a modicum of connectivity to Morty’s maiden voyage will be pleased to know that The Fear 2 sits within the same conceptual terrain. Its story — which involves another group of suspiciously old-seeming ‘teens’ heading to a woodland cabin to face their phobias, only to incur the wrath of the (now capable of shapeshifting) mannequin — once again swirls around such dark subject matter as parricide, the disintegration of the family unit, and the shared scars of trauma. A shame, then, that Kevin Richards’ gently reflexive script is just as contrived, confusingly motivated, and mythologically contradictory as its prattle-heavy predecessor.

Thankfully, director Chris Angel atones for the undercooked plotting and half-baked narrative with a polished and energetic visual style. Having impressed Sims with his Academy Award-winning student short, Mr. October (1996), debuting feature helmer Angel — who’d go on to tackle a pair of sturdy sequels to the Craven-presented Wishmaster (1997), Wishmaster 3: Beyond the Gates of Hell (2001) and Wishmaster 4: The Prophecy Fulfilled (2004) — demonstrates a good feel for atmosphere and manages to fashion several striking images and compositions. Best, mind, is that he and cinematographer Brian Pearson actually know how to lens Morty (who’s this time played by make-up tech-cum-actor Jon Fedele). In The Fear, a blend of ugly photography and sloppiness on the part of FX designer John Carl Buechler caused the wicked wooden bastard to look exactly like what he was: a bloke in a bad rubber suit. Here, Buechler’s significantly superior, EC-flavoured retooling of the character is augmented by Angel and Pearson’s understanding of one of the make-up FX industry’s guiding principles: that in order for an effect to work, you’ve got to light it properly to begin with. Bonus points for giving Betsy ‘Pamela Voorhees’ Palmer a role.

Also known as ‘The Fear 2: Resurrection’ and the numberless ‘The Fear: Halloween Night’.