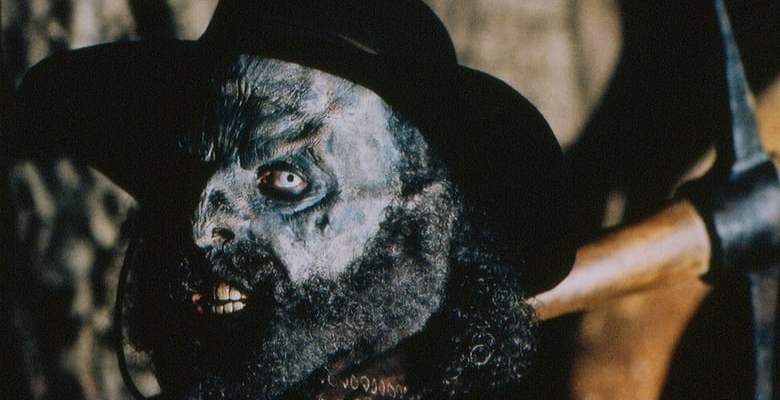 Jeepers Creepers (2001) is a tough movie to defend. It’s an enjoyable horror flick, but it was written and directed by a convicted paedophile, and any attempt to — wince — ‘separate the art from the artist’ is rendered impossible due to the predatory sexual subtext that bubbles beneath its narrative. That, though, is an altogether different conversation. Because irrespective of the grim individual responsible for its making, upon release Jeepers Creepers was a box office hit. And as is often the case, said big screen success ensured a couple of imitators — and over the next few years, the likes of Monster Man (2003), Reeker (2005), It Waits (2005), and York Pictures’ Scarecrow trilogy (Scarecrow (2002), Scarecrow Slayer (2003), and Scarecrow Gone Wild (2004)) would all crib elements from either Jeepers Creepers, its 2003 sequel, or both.

Directed by the late, great FX wiz John Carl Buechler, 2002’s CURSE OF THE FORTY-NINER (aka ‘Miners Massacre’) is perhaps the most flagrant Jeepers Creepers cash-in. Not only did U.S. distro DEJ release Curse straight-to-video on 23rd September 2003, just under a month after Jeepers Creepers 2 opened in theatres, they and the film’s U.K. rights holder, Film 2000, made prominent use of the titular Forty-Niner’s familiar-looking garb, gait, and countenance on their respective key art. Wide-brimmed black hat, monstrous face, long duster jacket — as far as copies of Jeepers Creepers’ boogeyman, The Creeper, go, the demonic prospector at the heart of Buechler’s cheap and cheerful time-killer is akin to those dodgy, copyright-infringing wrestling figures your Nana used to buy you off the market, when she’d be duped by ‘The Indestructible Marauder’, ‘Buff Brogan’, and ‘Manly Man Ronnie Sausage’.

In the film, the Forty-Niner is the murderous spirit of a wicked 19th century miner called Jeremiah Stone, who returns from the dead via satanic mumbo-jumbo and begins pick-axing his way through a gaggle of pesky young ‘uns hunting for his fabled stash of gold. And plot-wise, that’s about it: Curse of the Forty-Niner is as rudimentary as they come. Nearly everyone bar Stone talks and acts the same, and the only means of differentiation are their remarkably streaky early ‘00s hairstyles. Still, the film is helmed with verve by Buechler, to the point where its bull-headed belief in itself becomes a cause for modest praise. While incredibly sloppy compared to Buechler’s superior cult favourites Cellar Dweller (1987) and Friday the 13th Part VII: The New Blood (1988), the sorely missed B-horror icon nevertheless treats Curse of the Forty-Niner with an admirable amount of sincerity, eschewing the easier ironic schlock route and instead presenting it as joyously tacky celebration of stalk n’ slash clichés. The clue is in the bill-hogging cameos. Offering the kind of vibrant colour that the core cast lack, Buechler and scripter Antonio Olivas provide an interesting alternative to their protagonists’ blandness by encouraging Richard Lynch, John Philip Law, and Karen Black to subvert their stock parts. As such, you get a supposed Crazy Ralph-type who’s really a lend-taking hillbilly conman; an ostensibly amiable sheriff who’s actually kind of skeevy; and a masterclass in squawky mad woman histrionics from the indomitable Black. Martin Kove, Jeff Conaway, and Vernon Wells also appear, the latter as Stone’s human form in an old time-y flashback.

Premiering at the second Screamfest in October 2002 where it played alongside Cradle of Fear (2001), Ju-On: The Grudge (2002), and Anchor Bay’s then newly-struck remaster of Wes Craven’s The Hills Have Eyes (1977), Curse of the Forty-Niner bagged the long-running Los Angeles fest’s Crystal Skull Award for Best Special Effects. Naturally, the fun, if comparatively scant, make-ups and gore gags in question were designed by Buechler himself and executed by his trusted M.M.I. crew.