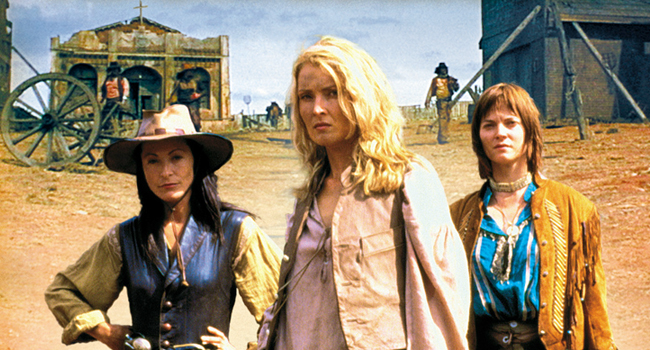 Having already produced a pair of OK-ish, made-for-TV westerns, Trigger Fast (1994) and Rebel Rousers (1994) (which, in certain territories, were presented as a two-part miniseries called ‘Guns of Honor’), British B-movie practitioner Paul Matthews returned to the form at the turn of the millennium with HOODED ANGELS. And what a return it was! Writing the script and handling directorial duties, the brilliant Hooded Angels stands as the finest offering from Matthews’ family-ran company, Peakviewing Transatlantic; a Cheltenham-based operation that was spearheaded by Matthews and his sister, Liz, and whose other notable titles included Grim (1995), Breeders (1997), and Merlin: The Return (2000).

Lensed in South Africa, and boasting excellent tech credentials and high production values, Hooded Angels begins with a real bang — quite literally, as the ol’ west town of Silver Creek is massacred and blown to smithereens by Confederate soldiers during the last days of the American Civil War. Caught in the carnage is Hannah (Chantell Stander) and her four year-old son, the latter of whom is gunned down. What happens next is marvellous: Matthews seamlessly changes gears, switching from action to pathos as a battered, bruised and emotionally broken Hannah, flanked by Silver Creek’s remaining female populace (Amanda Donohoe among them), cradles the moppet’s tiny, lifeless body, swearing bloody vengeance as Mark Thomas’ opulent score swells on the soundtrack. Punctuated by another powerful moment of violence, it’s a striking opening that sets the tone for what follows; a blistering ninety-five minutes that finds Matthews flitting between spectacle and probing drama with style and authority.

In terms of delivering the six-shootin’ goods, there’s plenty to feast on. Skipping ahead to three years later, the bulk of Hooded Angels’ story concerns Hannah and her by-now saddled up all-girl gang of society-hating outlaws as they’re tracked by a posse led by  Wes and Jack (Paul Johansson and Steven Bauer). A bank robbery and the rain-soaked gunfight it leads to are wonderfully exciting and sublimely staged, and the film’s final fracas is top-notch. There’s a nice bloody elegance to the surprisingly squirty impact wounds every time someone is pasted by a revolver or a rifle, and a smattering of light T&A that’ll satisfy the late night set. However, Matthews depicting Hannah and her crew as bisexual, polyamorous bed-hoppers is more than just exploitation flick box-ticking. As a narrative device, their cosying up to one another — in between knockin’ spurs with what blokes take their fancy — underlines how bonded they are, and cements the fact that they don’t need men to get their kicks.

Performance-wise, while several of the ancillary characters become a bit identikit, broadly speaking, the male members of the cast look like they’re having a ball playing in the cowboy sandbox, and there’s a palpable relish to Stander, Donohoe, and Juliana Venter’s turns as they tear-arse across the badlands, subverting expectations of what it is to be women in a patriarchal world. That said, as Hooded Angels rattles along, Matthews reveals himself to be less interested in his initial ‘battle of the sexes’ set-up and more invested in the deeper themes that bubble beneath the surface of his deceptively simple yarn. Refusing to cast judgment over any of his cavalcade of antiheroes, Matthews subtly twists Hooded Angels into a rumination on human morality and the shared scars of trauma. Hannah and Wes are united in grief and possess a complicated love/hate dynamic, both of them knowing that their rivalry will only end in further tragedy, despite their burgeoning feelings and deep-rooted connection.

Also known as ‘Glory Glory’, Hooded Angels landed on U.K. video and DVD on 23rd September 2002 via Jigsaw Entertainment (Peakviewing’s home video subdivision), and was released by Monarch Home Video in the U.S. on 26th November 2002.