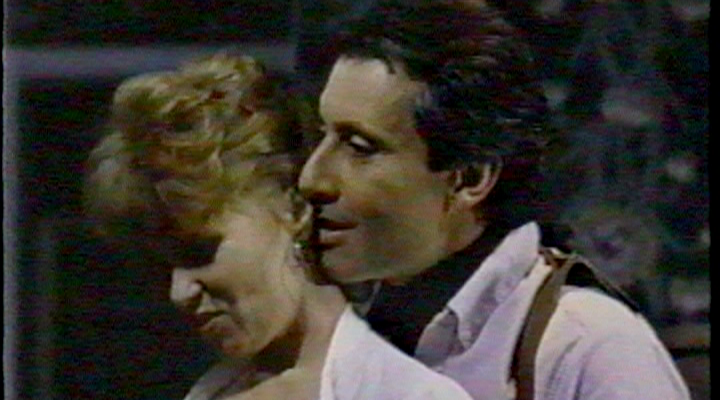 In 1984, as the Golden Age of pornography wheezed its final few 35mm breaths, Gary Graver was still managing to craft some fine pieces of work from the ever-dwindling budgets he had at his disposal. With the manner of neo-noir blended with the police procedural of Steven Bochco’s ’80s small-screen triumph, Hill Street Blues, TRINITY BROWN replaced the scale of past ‘Robert McCallum’ pictures with the lean efficiency that defined Graver’s career.

The plot (which has no credited writer) is somewhat convoluted, as Detective Trinity Brown (Colleen Brennan, Getting Personal (1985)) and her partner, Zach (John Leslie, Garage Girls (1980)), are assigned by their superior (Robert Kerman, providing some needed light relief with endless calls from his nagging wife) to investigate the murder of mob boss Tony Romano.

Frankie Carbone (Joey Silvera, Public Affairs (1983)) is the chief suspect in the case, and having been in the arms of Tony’s wife, Angela (Tamara Longley, Sex Academy (1985)), just before the hit went down, he’s keen to keep it under wraps. Thankfully for him he snags a shaky alibi from actress Cindi West (Kimberly Carlson, Summer Camp Girls (1983)), who, it transpires, had a child with Zach who’s being held hostage by Tony’s real murderers. Except she isn’t, and nor does she exist.

It might not have won any awards for its confounding narrative, but it did win a Best Actress gong at the 1985 Critics’ Adult Film Awards for the delectable Colleen Brennan – and deservedly so. It’s a career-best performance from the buxom redhead, who blends a great dramatic display with an X-rated elan that radiates sexual confidence.

Complementing this is John Leslie, and it’s clear the two actors had a great deal of respect for one another, which Brennan explained in-depth to Ian Jane back in 2011:

“The top spot on my list of favourite co-stars belongs to John. He was monogamous in his private life, and a truly handsome guy who women would often describe as a gentleman. In fact, I don’t remember hearing a single negative thing about him from the ladies he worked with. One thing that made him so special was the lack of tension in his body. He was relaxed, made eye contact, smiled and whispered. Little things that sound so ordinary can be too distracting to other male performers.” [1]

This is apparent on-screen, as both Brennan and Leslie’s sex scenes have a raw honesty to them that isn’t saddled with the artificiality of the genre, so much so it almost feels voyeuristic. They’re both charismatic performers with a steely assertiveness, and this is augmented by the ensemble that Graver has cast alongside them – there’s even a place (albeit via a needless tangent) for the prolific Jamie Gillis (The Opening of Misty Beethoven (1976)) as a seedy movie producer.

Graver obsessives will squeal at the cameo from Jean Clark (playing a simpleton to type!). Sadly, he was the only member of the cast to feature in Graver’s recommendable direct-to-video remake of Trinity Brown, Roots of Evil (1992) – though he found himself in good company alongside icons like Charles Dierkop and Brinke Stevens.

The legacy of Trinity Brown may only be a footnote compared to the twenty or so other blue movies that bore his McCallum pseudonym in this era, but the fact that it deserves recognition and praise once again underlines the sheer quality of Graver’s work in the hardcore genre.