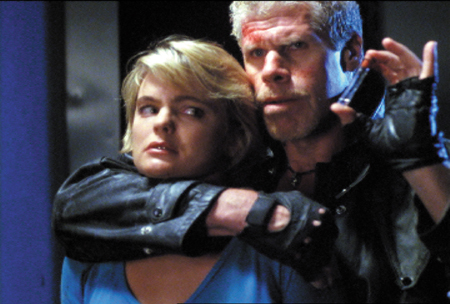 Dave takes a deep breath, straps on a seatbelt, and prepares for the craziest of Corman movies.

Terrorists, bank robbers, a doomsday cult, an earthquake, and a super virus. Take any of these five magical tropes and inject them into a B-movie and chances are you’d end up with something that deserves ninety minutes of your time. To put all of these plot devices in, well, you’d have to be crazy – or Roger Corman.

“Roger needed to deliver an earthquake picture, and I wrote the treatment,” director Brian Katkin told Fangoria just before the release of SHAKEDOWN. “Knowing low-budget films, I pulled a Reservoir Dogs (1992) where we have this disparate group of people – bad guys and cops – trapped in a building by an earthquake”. [1]

The bad guys of Shakedown are a combination of two separate entities. We have the leather trench coat wearing St. Joy (Ron Perlman), leader of religious wackos the Lord’s Restoration Army, and a group of bank robbers – a collection of hardened crooks with a new boy called Scotty (Brandon Karres) in tow. Both contingents are after the same prize: a vial containing the deadly Pandora Virus, which has been placed in the vault by eminent scientist Dr. William Siebert (Robert Arce).

However, laying in wait having assumed the role of a bank teller is kick-ass FBI guy (and – needless to say – trained virologist) Agent Alec ‘Mac’ Mackay (Wolf Larson), who hopes to stop the scoundrels from bagging the bug (“In the wrong hands it would make the Ebola virus look like diaper rash”). When an earthquake strikes, everybody’s carefully plotted schemes are thrown into chaos, and Mac finds himself teamed up with Julie Hayes (Erika Eleniak), whose initial quest to snuff out her brother Scotty’s criminal aspirations becomes a mission to save humanity from extinction.

“I was just determined to make the best damn gunplay movie I could,” noted Katkin. “I got a really cool location [an abandoned Sears] so I was able to utilise the things that were there. The earthquake stuff was done by shaking the camera and throwing dust in front of the lens, with a little CGI and some footage from Earthquake (1974), the flick with Charlton Heston. It was a tough shoot though, not least with the producer coming over and saying, ‘Bri, this actor, and this actor, and this actor – kill them by lunch please. I can only afford to pay them until then’. That would really complicate things, and they were characters who were meant to survive the piece!” [2]

Prematurely dispatched characters aside, Shakedown is a really solid piece of work. It’s the spaghetti bolognese of action movies – simple, satisfying and easily digestible. Characters drawn with the chunky abandon of a chisel tip marker litter the film, but that’s OK, it’s what we’re here for, as Larson, Perlman, and Eleniak warmly embrace the folly of it all with a great big bear hug.

As per Katkin’s intention to focus on firepower, the soundtrack of gunfire is virtually ceaseless. All of which turns the intensity up to eleven ensuring that the momentum rarely lets up. Granted, Shakedown‘s final third does give way to predictability under the threat of a neutron bomb, but both Larson and Eleniak engage in enough witty sparring (thanks to a quintet of scripters) to carry us through to the end credits with ease.

“I defy anybody to make this film on that budget,” asserted Katkin about his twenty day / half-a-million dollar budget shoot. “It’s the best thing they’ve done at Corman in years”. [3]

A bold statement from the ambitious director, but you’d certainly be hard pressed to find something from this New Concorde era that’s this much fun.