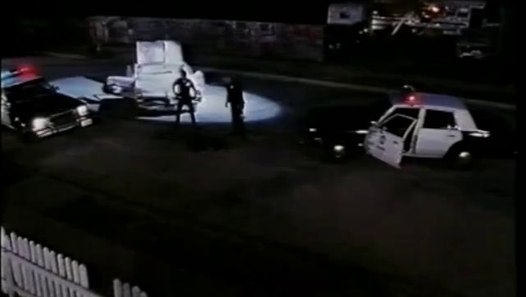 Having acquired his debut feature, Lucifer (1987) (aka ‘Goodnight God Bless’), for distribution, Canadian producers John A. Curtis and Lloyd A. Simandl’s North American Pictures struck a partnership with Brit maverick John Eyres and his emerging production outfit, EGM (formerly ABC Films/ABC Productions). While this team-up wouldn’t really hit their artistic stride until the mighty Project Shadowchaser (1992), the films they made together in the interim — Empire of Ash III (1989), Xtro II: The Second Encounter (1990), Ultimate Desires (1991), and Survival Island (1992) — all did decent business on video. Most crucially, though, despite these offerings running the gamut in terms of entertainment, every successive pairing between EGM and North American began to feel more and more like a ‘real’ movie, rather than, say, Lucifer or North American’s maiden voyage, Ladies of the Lotus (1987), which unspooled in a manner totally befitting of what they were; that being the first stabs at moviemaking from a gaggle of inexperienced creatives learning the ropes as they go.

With that in mind, SLOW BURN, Eyres’ sophomore directorial venture and North American’s fourth production (following Ladies of the Lotus, Possession: Until Death Do You Part (1987), and the original Empire of Ash (1988)), is an interesting flick if not a very good one. As far as professionalism goes, it’s an improvement. The cast has a couple of names (character actor double whammy William Smith and Anthony James), and, as a technical exercise, the film demonstrates a conventional and reasonably polished cinematic sheen augmented by its extensive location shooting in downtown Vancouver (which subs for New York in the plot).

Fans of Eyres will savour the burgeoning auteur flourishes, too. Eyres’ penchant for starting with a bang results in another throat-grabbing opening that, like subsequent joints Project Shadowchaser and Monolith (1993), rivals the intensity of Lucifer’s ferocious schoolyard massacre, as James’ creepy, shotgun-toting hitman coolly turns a family-owned Italian restaurant into an abattoir. “Mr. Scarpelli sends his regards,” he says, before unloading shell after shell into all and sundry, sparing a kid solely because he ran out of ammo. Slow Burn also contains several visual motifs that are repeated throughout the helmer’s distinguished CV (chiefly, shots of moving feet), and builds upon the themes established in Lucifer of uneasy alliances and camaraderie; themes that Eyres would probe further in everything from Project Shadowchaser to his directorial swansong, Irish Jam (2006). However, as a director, Eyres is only ever as tight as the material he has to work with. And in that regard, Slow Burn is a clunky and sluggish affair that still feels as if Eyres hadn’t finished his apprenticeship just yet.

Indeed, Slow Burn is an apt title. It’s plodding in the extreme, with Eyres allowing passages of it to go on and on with little regard for — or awareness of — pace and structure. What doesn’t help is Slow Burn’s script. Conceived by Eyres and written by Stephen Lister, at the film’s core is a simple crime story: cops vs. The Mafia vs. The Triads. But it’s muddied by reams and reams of convoluted and hard-to-keep-up-with dialogue and a problem identical to Eyres and Lister’s later union, Monolith:

It’s a collection of scenes.

Shootouts, car chases, a screaming police chief, an undercover rookie getting too close to the case, a foot chase, another car chase, another screaming police chief… Some of it’s OK, some of it’s ‘meh’, and some of it is rubbish — to the point where even the unintentional hilarity of Smith’s ‘shaddappayourface’ accent as a snarling don can’t save it.

Lensed as ‘Brothers in Arms’ and released in certain international territories as ‘American Slow Burn’ and ‘Murphy’s Law’, Slow Burn hit US VHS on 31st October 1990 via Arena Home Video (a subsidiary of Xenon Entertainment Group), and belatedly landed on British soil in the final quarter of 1994 through First Independent.