Still going strong, you don’t survive over thirty-five years in the B-movie trenches without continually shifting and Jim Wynorski’s versatile resume is full of everything from horror and softcore, to action, sci-fi, and family fare. However, there’s more to Wynorski’s genre-hopping than commerce. As an artist, the prolific Chopping Mall (1986) maestro loves to mix it up, blending two, sometimes even three genres in each individual film. Consider the swords n’ sandals n’ satire of Deathstalker II (1987), or the chills, sensuality, and drama on display in the steamy and amazing Sorceress (1995). But within Wynorski’s mammoth filmography, there’s no picture quite as eclectic as STORM TROOPER (1998). A wild blend of late-in-the-cycle robo-schlock, luscious southern gothic, rollicking siege flick, tense military thriller, and sweet, low-key romance, Storm Trooper is a distinguished gem that comes with a glowing recommendation — even if the film’s daft coda seems a little jarring and out of place compared to the elegance of what precedes it.

Despite boasting a fruity supporting cast that features lively turns from Zach Galligan, an eye patch-wearing Corey Feldman, and such eternally awesome Wynorski stalwarts as Arthur Roberts, Jay Richardson, Ross Hagen, Melissa Brasselle, and John Terlesky (a neat bit of symmetry with the aforementioned Hill — Terlesky had, of course, inherited the Deathstalker mantle in Wynorski’s superior follow-up), Storm Trooper is Alt and Laughlin’s show. Bolstered by T.L. Lankford’s thoughtful script, Alt conveys the angst of a woman broken by the death of her son with heart-wrenching power, and Laughlin treads a delicate, hypnotically contrasting line between Blade Runner (1982) esque flutters of existentialism and bruising, Arnie-tinged arse-kicking. A trained martial artist in real life, Laughlin’s scenes of hand-to-hand combat give vintage Seagal a run for their money in the bone-breaking department and Wynorski stages them with aplomb. In fact, the sequence in which the Crimes of Passion (1984) star dispatches three mercs in a single long take ranks as one of the greatest moments Wynorski has ever crafted, second only to the infamous It’s a Wonderful Life (1946)/Night of the Living Dead (1968) mash-up in 976-EVIL II (1991) in terms of spectacle. Incidentally, the stock footage-loving Wynorski also cribs the motorbike chase from that particular offering, cleverly repurposing it here to enhance Storm Trooper’s already impressive action quotient.

In the U.K., Storm Trooper hit VHS in April 2000 via Warner Bros., alongside two other films Wynorski had produced under his Sunset Films International banner, Against the Law (1997) and Demolition University (1997). Making for an interesting companion to Wynorski’s earlier, structurally similar Sunset joint, The Assault (1996), Storm Trooper was the penultimate feature to carry Sunset’s insignia. Co-owned by Wynorski and frequent collaborators CineTel, Sunset Films was formed in 1994 and served as CineTel’s low budget, non-theatrical, video and cable subdivision. In the U.S., Sunset had output deals with Triboro Entertainment and Concorde/New Horizons, and prior to shutting shop in 1999, produced a slate of fourteen enviable titles — the best of which (Sorceress, The Assault, Vampirella (1996), Against the Law, and this) were all directed by Wynorski. 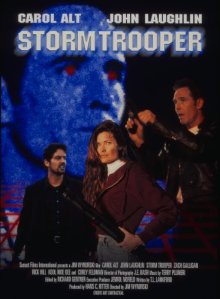