From the vault of Zombie Hamster: Matty thaws out an underappreciated millennial slasher flick.

Despite the older and grumpier end of horror fandom often claiming otherwise, Wes Craven’s Scream (1996) wasn’t the death knell of the slasher flick. Rather, it was the subgenre’s rejuvenation. Craven’s penultimate masterpiece (because Scream 2 (1998) is as equally bold and brilliant) and the wave of self-reflexive slaughter that followed proved just how smart, scary, and relevant this purest of horror frameworks could be again. Granted, there’s clag in every cycle; and for every awesome and amazing I Know What You Did Last Summer (1998) and Cherry Falls (2000), there’s a dilutive and dreck-y Urban Legends: Final Cut (2000) and Dead Above Ground (2002). But to dismiss the hugely popular late ‘90s/early ‘00s epoch of teen-centric terror completely is to consign a wealth of goodies to the scrapheap, from meta, franchise-saving sequels Bride of Chucky (1998) and Halloween H20 (1998), to honest-to-goodness body count throwbacks like Valentine (2001) and SHREDDER.

Rigidly old school in content, tone, and delivery, Shredder is so deep-rooted in stalk n’ slash convention that it’ll almost certainly test the patience of those who want the envelope pushed, not held onto for dear life. Its fierce simplicity, though, is its greatest pleasure, and Shredder is a tremendous F.U. to anyone who believes the humble hack-a-thon died with Scott Spiegel’s Intruder (1989). Directed by Greg Huson, Shredder is as primal and as to the point as the golden age greats that sit a tier or so below Friday the 13th’s (1980) finest imitators. It’s the millennial equivalent of such efficient third rungers The Prowler (1981), Madman (1981), and Humongous (1982). And like the foreboding Dog Island in the latter, Huson and co-scripter Craig Carlson ensure that, while familiar, their tale of hip, young snowboarders (the voice of Disney’s Aladdin, Scott Weinger, among them) being offed by a masked, black-clad skier at least unspools at a memorable and very cool location.

As venue-driven as its equally marginalised contemporaries, 1998’s splendid The Clown at Midnight and 2001’s other most-decent jolter, The Pool (which played out inside a majestic old theatre and the stunning Aquapark Babylon Centrum in Liberec, Prague, respectively), Shredder might lack their superior production values, but it trounces them in terms of sheer snotty energy. Crisply lensed at the picturesque Silver Mountain Ski and Summer Resort in Kellog, Idaho, cinematographer Charles Schmer (reuniting with Huson after his self-funded indie debut, Decaf (1996), and who’s recently lent his talents to the camera crew of American Horror Story) infuses the film with a rousing punky edge — part music video, part travelogue, as if Russell Mulcahy had turned his hand to a low-budget, snow-covered episode of Wish You Were Here.

Indeed, the enthusiasm that fizzes through Shredder is infectious, and knocks it several notches above its lethargic, ski lodge-based predecessors Satan’s Blade (1984) and Iced (1988). A comparison previously drawn by critic J.A. Kerswell, the slasher movie guru quite rightly described that earlier, semi-obscure pair as “ultra trashy” and “skid row” in his archival Shredder dissection; Huson even confessing to never actually seeing them, let alone being influenced by them. Instead, the helmer found inspiration from the same kind of brainwave that caused Tobe Hooper to feverishly conjure The Texas Chain Saw Massacre (1974) as he stood in a crowded store’s hardware section. As Huson explained to Kerswell in a follow up interview:

“[A] buddy and I were skiing at Mammoth Mountain [California], cursing at the snowboarders, and wanting to kill them. At the time I was still paying off the credit card debt from my self-financed first film, so I was looking for something commercial and fun to make. I immediately thought of ‘Red Snow,’ but my friend — who’ll go unnamed, for the purposes of plausible deniability — said, ‘No, dude, Shredder!’”

Beginning with some atmospheric vistas of Silver Mountain, Huson’s foreshadow-y opening credits (pay close attention to the lingering shots of the resort’s Responsibility Code, chairlifts, and snow plow) soon give way to a stirring sequence by the film’s ski and snowboard action unit. Tearing across the landscape, a snowboarder is pursued by Shredder‘s murderous psycho as prolific promo and commercial director Christian Loubek (whose credits include numerous sleek car ads and shooting the titles of HBO’s Six Feet Under) and his team (which also features his pro skier brother, Josh Loubek) go all out with the lens flare, slo-mo, and other extreme sports stylistics in the first of their impressively orchestrated set pieces. It’s thrilling stuff, and wickedly capped off by a tasty, neck-goring tripwire gag.

Coming courtesy of SOTA FX, Shredder‘s bloodletting is modest yet satisfying. Prosthetic technicians Mark Villalobos and Owen Hedges spill enough claret across the snow to atone for the killer’s final, kind of goofy unmasking. However, Shredder‘s best death is one that’s totally grue-free — an accident, in fact, as a chair lift encounter with the slope-stalking sicko ends with a character inadvertently hanging themselves with their own scarf. It’s eerily beautiful and darkly hilarious as their lifeless, dangling body travels up and down the mountain for the rest of the film.

Having played across America’s Pacific Northwest in a limited theatrical run, Shredder, for us Brits anyway, is firmly aligned with the great mid-’00s, straight-to-video tradition of snowbound schlock; it formerly shared shelf space with the Stephen King-based Sometimes They Come Back… For More (1998) and John Buechler’s Deep Freeze (2002) in Blockbusters, Globals, and Music Zones the UK over. Hitting disc from bargain bin gods Prism Leisure in April 2003 (fittingly, on the same day as Buechler’s charming The Thing (1982) retread), its budget priced DVD can still be picked up online for pennies. Which is probably just as well, really: importing Scorpion’s US Blu-ray would be pretty pricey.

But, hey, maybe if we shout loud enough, we might convince 88 Films to do a port? 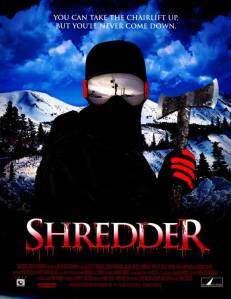