As a piece of pure titillation, Naked Instinct is quality stuff. What strikes is DeCoteau’s ability to make a bit of smut with broad appeal. For the fellas, there’s plenty of the slinky and eternally delicious Bauer on show to drool over, and softcore journeywoman Power is as equally easy on the eye. And for DeCoteau’s all-important girl and gay audience — well, there’s enough full-frontal sauságe on display to line a butcher’s window.

A heady watch, the copious, imaginatively choreographed scenes of simulated bonking are intensely athletic. Mostly utilising a locked off camera to emphasise the emotional detachment of Bauer and Power’s liaisons, DeCoteau goes for primal attraction and propels Naked Instinct through the vigorous, animal-like gyrations of his cast. Though the sight of rent-a-studs Michael Vavrin and Len DiStefano — as a rich, frustrated virgin and a randy poolboy respectively — dry humping furniture is more ridiculous than sexy (particularly as the latter can barely conceal how squashed his bollocks are against the cushions of the easy chair he’s pummelling), by and large, DeCoteau stirs up a convincing atmosphere of frenzied, slightly fantastical lust. A scene towards the film’s end involving Power getting some beefcake to dance for her in a baroque-looking room oozes DeCoteau’s patented brand of oneirism, but the standout belongs to Bauer and a Tom of Finland-style frat bully (Albert Mitchell, who, incidentally, would go on to appear alongside Bauer again in Fred Olen Ray’s Bikini Drive-In (1995), playing her manservant). As ludicrous as it is joyously salacious, DeCoteau unleashes a wonderful blast of sexual hysteria as his fetishised shots of male muscle worship descend into a flurry of nipple rubbing, butt grabbing, and lip licking as a pouting, sweaty, and starkers Bauer frantically runs a riding crop up and down Mitchell’s arse crack. In a quintessentially DeCoteauian flourish, the rippling Mitchell sports sunglasses throughout, just as he did in his fleeting turn as a bouncer in the helmer’s Test Tube Teens From the Year 2000 (1994).

DeCoteau’s first of an innumerable amount of director/writer teamings with Tempe Entertainment mainstay Matthew Jason Walsh, Naked Instinct also has the distinction of being pseudonymously edited by Tempe bigwig J.R. Bookwalter, who was firmly within DeCoteau’s Cinema Home Video fold at the time and helped release the film on tape. 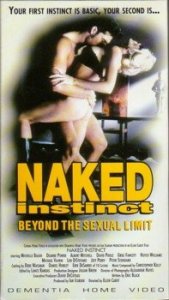