So, the last gay lead character in a horror movie was?

I may be waiting a while, because it’s an outrageous oversight that seems to be in direct contradiction to the make-up of the general population. Wasn’t it Kinsey who stated that 13% of men were predominantly homosexual for at least three years between sixteen and fifty-five? Admittedly his survey methods may be disputed, but a figure of one in ten (first coined in 1977 by Bruce Voeller and the NGTF – US National Gay Task Force), genuinely doesn’t seem too wide of the mark.

Quite why this widely accepted number isn’t represented in horror movies, especially those outside the realm of the studio system, with their relentless desire to score box office coin in the Midwest, is one of life’s ongoing mysteries; in fact you might say it’s both dismissive and offensive. Having said that, let’s all raise a glass to the makers of THE AXE MURDERS OF VILLISCA, for managing to write a gay character free from the usual camp clichés and tiresome tropes, in what turns out to be a highly recommendable DTV’er.

Intrigued by the real life mystery that surrounds a ‘Murder House’ in the town of Villisca, a group of misfit school-friends set out to find the truth for themselves. Caleb (Robert Adamson) is dealing with the fallout of getting caught-up in a robbery that saw his father shot to death, while his best friend Denny (Jarrett Sleeper) is trying to cope with daily abuse from his peers (“What do we have here? Everybody’s favourite faggot”). Meanwhile, Jess (Alex Frnka) is new on the scene, and after a personal video is leaked from her phone, spends most of her time reading Bret Easton Ellis novels while camped in the bathroom stalls away from the baying hordes of bullies.

Director Tony Valenzuela (creator of YouTube sensation, BlackBoxTV), hit pay dirt with the property he’s used for the movie. Oozing with finely crafted atmosphere, it’s an ideal location for the picture – both inside and out, but what resonates most is undoubtedly Owen Egerton’s script, from a story by Valenzuela and Kevin Abrams. Instead of the phoned-in monster-of-the-week scenario that’s trotted out ad infinitum with abandoned house movies, The Axe Murders of Villisca focuses on the struggle of our besmirched trinity to reconcile with their personal demons; it’s a device that really makes this low-budget film pop with originality.

Released this week in the UK into ASDA stores, courtesy of their exclusivity deal with Gilt Edge Media, Villisca will be hit other retail outlets from the 31st July. 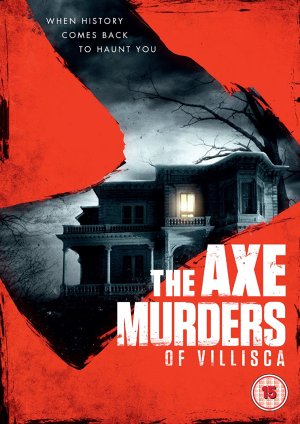 Sneaking onto DVD this week from High Fliers, complete with a refreshingly virginal IMDb entry is LAKE TOMAHAWK, a brisk, engaging, yet ultimately disappointing seasonal slasher.

The Thomas family are on their way to Lake Alice in Tomahawk, Wisconsin to spend their Christmas vacation in wintry solitude. Sarah (Caroline Tudor) has been permitted to take Ryan (Brad Schmidt), her boyfriend of twelve months along for the trip, much to the irritation of her father Greg (Peter O’Brien – Neighbours), although her mother Natalie (Laura Niemi), seems far more relaxed at the prospect of spending the holidays with her future son-in-law.

Despite a seemingly random pre-credits kill sequence, much of the running time is in fact taken up by the family dynamic, with Greg pulling out all the stops to make Ryan feel deeply uncomfortable. It’s Greg though that bears the brunt of the peculiar obsession the local police have with the family, with Sheriff for hire, Michael Shamus Wiles (Mortuary (2005)), seeking to make their stay an uncomfortable one at every opportunity.

Eileen Dietz, who of course was the shocking face of Pazuzu in The Exorcist (1973) is a welcome addition as a local store owner whose son Tyler (Brando Eaton) harbours feelings for Sarah, which provides yet another dimension to the films dramatic tension, and with town simpleton Carl (Patrick Burch) thrown in for good measure, we have more red herrings than a North Sea fishing boat.

Having said that, Stevie Jane Miller’s script assembles all these head-scratchers with a deft zing, and despite a creakily contrived nature, Lake Tomahawk has a really enjoyable opening forty-five. It’s descent into mediocrity though is a frustrating one that feels like a race to get to the finish line, and in doing so manages to unravel all its good work.

With a final reveal that turns eye-rolling into an Olympic sport, Lake Tomahawk heads into the final stretch with a deeply disappointing ending and a litany of unresolved threads. It’s by no means a lost cause, as with a fine cast of recognisable faces it’s still a pacey Yuletide tale, but just quell any enthusiasm before the inevitable downer hits you with all its might.