Faced with the latest Asylum title to find its way onto UK shores, there’s probably little point in spending the next two hundred words extolling the virtues of David Michael Latt’s low-budget production factory, as chances are the mere mention of the A-word will have you speed reading down to the next movie.

As long time readers will know I’m a big fan of the Burbank-based bastions of B-moviedom, and never more so than with the arrival of a new Mark Atkins film. Atkins, a long-term collaborator of The Asylum who has directed just a couple shy of twenty features for them, always seems to wring a few drops of micro-budget nectar from the minimal resources he has to play with.

It’s a quality that journalist and documentarian Calum Waddell noted when he interviewed him for Slice & Dice: The Slasher Film Forever; “To date, Mark has never really got the break he deserved”, Waddell told me this week, “He works on the tiniest of budgets for the Asylum, on insanely demanding shooting schedules, and yet his genuine love of B-flicks still through in the end productions”.

Such endeavour is certainly evident in the highlights of his resume – Halloween Night, Android Cop and now ROAD WARS. “Whilst he’s not created a masterpiece, he is a guy that obviously even the most lowbrow of stuff is tackled with a certain zest” ponders Waddell. “He just loves the genre, and can wax poetically about Sleepaway Camp, Jack Hill flicks, Brian Yuzna and beyond. He’s one of Hollywood’s true nice guys, and I hope someone eventually gives Mark the break he deserves”.

While Atkins’ latest may be conveniently billed as a Mad Max mockbuster, the movie has far more in common with the mid-eighties wave of desert-set post-apocalyptic movies, an oeuvre he no doubt has great passion for. I admit, there’s an irony there in the fact that that glut of direct-to-video movies grew from the success of George Miller’s original trilogy, but it’s unquestionable that they eventually morphed into a self-sufficient genre of their own. From Enzo Castellari to Cirio Santiago, Atkins film – complete with stunning vistas of the Mojave Desert – is a perfect fit into this band of sci-fi schlockers,  and the fact it’s available in a leading UK supermarket for a fiver makes it a must have purchase.

Hailing from the North-West of England, the place name of BLACKBURN evokes only the industrial revolution and a football club run by a chicken magnate, but in the world of DTV it takes us to an Alaskan ghost town with a horrifying history. Directed by Lauro Chartrand, the prolific stunt performer whose work has graced the big budget sets of films like Dawn of the Dead and I, Robot, he made his directorial debut a few years back with the passable Steven Seagal picture, Born to Raise Hell.

His sophomore work is an improvement, although there’s no escaping its ropey CGI, generic teen cast and decidedly SyFy feel. That’s not necessarily a bad thing though, and with the inclusion of a cameo from the Soska Sisters, as well as a fleeting appearance from Ken Kirzinger, there’s plenty for us genre folk to rub our thighs over, especially the inclusion of twins Joyce and Jacqueline Robbins who run away with the film as Ivy and Iris. What can’t be overlooked though is the fact the opening half of the feature dawdles along with no real urgency, leaving the main course of the feature, and the introduction of Blackburn Asylum squeezed in to the last half hour. That descent into deformed psychotics r’us raises the interest bar few notches, but comes too late to raise Chartrand’s movie above deeply average.

The highlight of the week for me was undoubtedly the new Sheldon Wilson movie, UNSPOKEN. His second feature, Shallow Ground, landed in the UK just over a decade ago and remains one of the best under-the-radar horrors of the early noughties. Following it up with Kaw, a riff on The Birds, then a sequel to Christian Duguay’s Screamers, he planted his feet very firmly in the realm of SyFy channel features, knocking out just over half-a-dozen since 2006.

Unspoken though sees him return to his roots, directing a cannily told tale from his own script which sees Angela (Jodelle Ferland) accepting a job caring for the nine year old boy of a new resident in the small Canadian town where she lives with her out of work father. There’s something suspicious about the Briar House though, not least because the previous residents are thought to have vanished into thin air seventeen years ago, but with money tight, Angela is left with little option other than to grasp the opportunity of employment, irrespective of the eerie legacy the property has.

I’d be lying if I said that Unspoken doesn’t rely on the occasional cattleprod shock to pin you back into your chair, but here they’re handled with more vigour and intent than the majority of Blumhouse snore-fest’s, and by working in tandem with a foreboding sense of horror, the scare factor of Wilson’s film delivers a good return. While initial exposition hints at a formulaic haunted house movie, the ingenuity of Unspoken lies in the manner in which it takes us down a variety of avenues and cul-de-sacs that offer genuine surprise around each corner – not least a mic drop final shot, resulting in a movie that clasps both hands on a DTV Junkyard seal of approval. 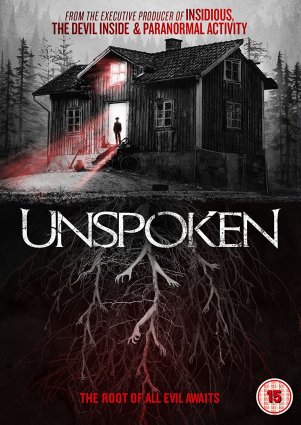 At the opposite end of this weeks’ hierarchy of excellence is JOKER’S POLTERGEIST, or Joker’s Wild as it’s known in America. If you had to pick an ideal scenario for a horror movie to take place in, based on the feverish brilliance of movies like Demons, Popcorn and Midnight Movie, the chances are a cinema would lie pretty high up that list. If you were to structure a storyline though with a nod to the Aurora cinema massacre, then perhaps that wouldn’t be so cool, and indeed that’s certainly the case with Christopher Lind’s picture.

Lind has been a jack of all trades behind the camera in recent years, undertaking a variety of behind the scenes role, and for his debut picture he directs Kenneth De Vecchio and Dylan Bank’s screenplay of a cinema owner fighting to re-open her business following a masked assailant gunning down her movie-watching friends and family one evening.

Boasting the appearance of B-movie veteran’s Eric Roberts and Martin Kove above the title, these DTV stalwarts are pretty much absent aside from a handful of scenes that appear to have been taped elsewhere and inserted in. This leave much of the focus on Lacy Marie Meyer who plays the bafflingly named Aurora Palace, and in all honestly she has a good on-screen presence. However, as the film clumsily descends into the gun debate, presumably as a means of justifying its insensitive narrative, this muddled sixty-four minutes (minus credits) of celluloid fails to make the best of a potentially cool location, and becomes something you’d really like to forget you spent time watching.

Matellano pretty much sticks to the original narrative, but there’s no denying that it falls short in almost every aspect. It may ooze with sex, nudity and a splash of kink, but there’s an overriding sterility to Vampyres that’s hard to shake off and serves as a barrier to embracing it. Granted, there are moments of lip-smacking awesomeness such as a blood-soaked bathtub sequence, but all too often , and nowhere more so than in the final reel, it just descends into dimly lit humdrum, that despite an obvious technical prowess, sits rooted to the ground below the pedestal that Larraz’ film comfortably sits upon. Even the presence of Spanish genre veterans Antonio Mayans and May Heatherly can’t generate the old school quality that it so desperately yearns for.

Thirty million surveillance cameras have been sold in the last decade, THE LANDLORD reliably informs us, before going on to say that last year alone eight thousand people were watched in their homes without their knowledge. A scary statistic, and one that’s about to creep into the lives of newlyweds Ryan and heavily pregnant Claire, as they move into their new abode.

However, even the slightest glimpse at their mumbling landlord Gerald screams perverted nutcase, with his dishevelled appearance, over-sized steel-rimmed glasses and perpetually sweaty forehead. So far, so predictable, but where Victor Zarcoff’s film excels is in the ambitious decision to undertake a two-pronged narrative. Not only are this young married couple being spied on, but with things decidedly fractious between the pair, Ryan’s roving eye harnesses the attentions of his buxom assistant, taking the picture on the path that strays far from the Pierre David handbook.

Admittedly the far-fetched finale with lead to a few groans and a collective roll of the eyes, but this tidy little potboiler is worth seeking out for its tidily packaged plethora of surprises, and a skin-crawling villain who will have you checking that newly discovered hole in your bathroom wall – just in case. 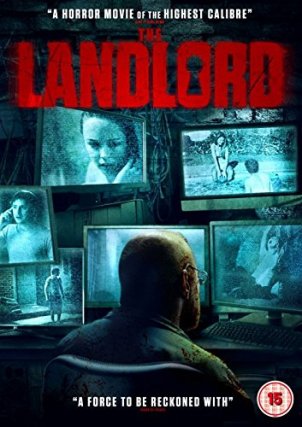