Having just picked up the very welcome, yet slightly problematic Australian Blu-ray of Richard Franklin’s Road Games, the appearance on the supermarket shelves this week of Abner Pastoll’s ROAD GAMES conjured up a quizzical tilt of the head as to whether someone had dared remake the Ozploitation classic; they hadn’t, but what they had done is actually make a very fine psychological horror, that arrives bearing the now familiar FrightFest Presents banner.

When hitchhiker Jack (Andrew Simpson) rescues Veronique (Josephine De La Baume) from a road rage altercation, the two decide to travel together for safety’s sake after learning a serial killer is loose in the area. Taking up an offer to stay the night at the mansion of an elderly couple (played by Frederic Pierrot and Barbara Crampton), the deranged, demented and bloody escapades begin.

Filmed between Kent in England and Picardy in France, the flavour of this delicious little feature is more Gallic than Garden of England, which positions it appealingly in the circle of Alexandra Aja’s Haute Tension and Xavier Gens’ Frontier(s). Lofty companions they may be, and while Pastoll’s feature doesn’t quite hit the heights of such horror royalty, the richness of its intrigue and mystery makes for captivating viewing.

Such acclamation lies primarily with the strength of the characters. Right from the start both leads are purposefully coy, with Jack stating simply “I’ve been down South, just hanging out”, when probed about his time in France and his absence of luggage. Veronique is similarly reticent, while their ensuing acquaintance with enigmatic pensioners Grizard and Mary serves only to questions the motives of this entire quartet.

A perfectly pitched score from Daniel Elms increases in its ferocity as we move towards the climax. It is a slow build, although a gradual unravelling is perfectly suited to the film as opposed to a revelatory mic drop moment, which makes the conclusion of this Euro-tinged shocker all the more satisfying.

Postscript: Eagle-eyed among you will catch sight of the great Edward Hogg in a blink-and-you’ll-miss-him cameo as a corpse! Go and catch him in White Lightnin’ (2009) and then come and tell me it’s the greatest film you’ve never seen.

THE DARK FOREST is pretty much The Josh Stewart Project. Most of you will be familiar with Stewart from his role as Arkin in the very effective chiller The Collector and it’s similarly decent sequel The Collection, and here he’s very much a Josh-of-all-trades assuming the role of director, writer, producer, lead actor and occasional camera operator too.

In an attempt to land their own TV hunting show, Jake (Stewart) and his buddy Steve (Ronnie Gene Blevins) head into the dense, secluded mountains of West Virginia. Equipped with only their bow and cameras, they have three days to kill a prized buck big enough to grab the attention of a TV network. As sun sets though, they realise they’re not alone. A supernatural force appears to be lurking in the woods, and now they’re the ones being hunted.

Made back in 2013, this found footage horror which was released Stateside under the title The Hunted, has taken a couple of years to get to the UK. Much like last weeks’ Lair of the Beast, coincidentally also from 101 Films, it’s a really well shot FF movie, devoid of the more annoying characteristics of the genre. However, despite two engaging lead actors, it struggles to satisfy your demand for a gradual, heart-racing increase in suspense, instead delivering a more piecemeal supply of inconsistent moments of mild peril! Eminently watchable, when it does finally reach a terror crescendo, it’s simply too little too late and The Dark Forest sits crumpled among the bottom shelf of mediocrity.

The last film by Justin Price to hit the UK was The Cloth, a barrel-scraping DTV’er if ever there was one, whose possession-orientated shenanigans were made moderately less painful by the presence of Dann Trejo and Eric Roberts to at least provide some genre stalwart interest. His new film, FORSAKEN, once again takes that well-trodden path of possession – indeed it was mooted as The Cloth 2, but with an absence of B-movie icons, it sinks firmly into the void of uninspired dreck.

Father Townsend, a devoted husband and priest, is devastated when his wife Emily is diagnosed with a terminal disease. Feeling abandoned by his faith, he decides to go against his beliefs and seeks to have Emily possessed through an exorcism, in a desperate bid to save her life. All seems well until he realises that his actions have accidentally released a series of vengeful souls seeking to unleash evil. Now, he must make the ultimate sacrifice, or risk the almighty antichrist rising from the depths of hell.

Credit where it’s due, and we should all collectively doff our caps at the sheer insanity of that storyline. “This is not an exorcism” exclaims Father Townsend, “This is a sacrifice”, and boy do I know it having given up ninety minutes of my life to squint through an endless parade of barely lit sequences. Indeed, it was only after I shut out every shaft of light from my living room that I could gauge with any degree of accuracy just what was occurring on-screen. It was like listening to a radio play albeit with lots of long silences and cringing dialogue. With such a handicap, it was always going to be nigh on impossible to craft anything other than risible guff from the ashes, and despite some so-so gurning and contorting during the exorcism, there’s little here to recommend. 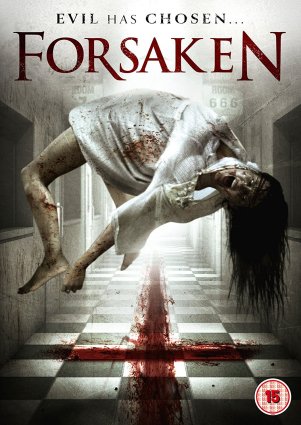