My last Bournemouth-based horror was on the streets of Boscombe following an all-night bender on Absinthe and Tequila as a snot-nosed student on a weekend away. While K-SHOP certainly didn’t result in a three day hangover, it did lead to an afternoon of despondency following this bleak and sobering British picture, which manages to strike an even balance between gore-laden grimness and damning social commentary.

After his father is killed in an altercation with drunken thugs, Salah’s (Ziad Abaza) world is plunged into darkness. Forced into running the family kebab shop alone, Salah struggles to manage the increasingly rowdy night life, and when a fight with an angry customer goes fatally wrong, he finds himself with a dead body on his hands. With no faith in the authorities, Salah disposes of the body in the one place he knows best… the kebabs.

Although it’s tempting to think of K-Shop with a mischievous tee-hee-hee and offer comparisons to Mrs. Lovett’s meat pie’s in Sweeney Todd, the anger and the sense of a fractured society is far too overwhelming. “Where you from?” slurs a waiting customer, before exercising his geographical prowess with “The Middle East… y’know, Pakistan?”. It’s all too familiar to Salah, who following the death of his Turkish-born father is forced to juggle the shop with completing his degree; the white noise of leery beer-soaked Brits constantly permeating his eardrums, while the relentless knuckle-dragging behaviour of a portion of his clientele leads him to the end of his tether. It’s all disturbingly real; a damning indictment of our booze-fuelled culture.

K-Shop is a powerful piece of cinema, distinguished by dialogue that stings in its anger and vitriol. It’s not just confined to the drunks either, as drug dealers and scheming salesman too feel the wrath of the mincer, while a potential employee wearing a Red Sox baseball cap also bears the brunt of Salah’s educated cynicism; “Have you ever been to Boston? Have you ever seen the World Series? Then why the fuck are you wearing that cap?”.

An exhausting watch it may be, but it’s an essential one at that, as writer / director Dan Pringle exhibits a maturity beyond his experience in his debut feature. Admittedly, at a few minutes short of two hours, the movie is prone to occasional dips in intensity, but it’s still a very impressive piece of independent British filmmaking, and one that will hopefully get the following it deserves.

As I mentioned a few weeks back, it’s been a real privilege to look at each title in Icon Home Entertainment’s FrightFest Presents offshoot, as it’s thrown out some genuinely exciting films that I’ll really enjoy revisiting in years to come. As the last one drops this week, it’s a bit of a bummer then that THE UNFOLDING won’t be one that I care to watch again, despite a premise and a location that should have resulted in so much more.

It’s 2016, and a fearful world stands on the brink of nuclear catastrophe. A young researcher in psychical events, together with his girlfriend, travel to the legendary wilds of Dartmoor, England, to investigate a rambling, centuries old building. Here, they find themselves drawn into a murder mystery from the past, a mortal confrontation with pure evil, and a fight for their very survival.

The barren wilds of Devon seems to be somewhat of a haven these last few years for indie features that never quite realise their potential. In the wake of A Night in the Woods (2011) and Dartmoor Killing (2015), Eugene McGing’s The Unfolding begins by doing everything right; it’s washed out tone, is very appealing, so too is the early mood of desolation and the sprawling house cloaked in atmosphere. With a backdrop of increasingly pessimistic new reports, there’s a sullen vibe to the picture – a real antithesis to the eardrum splitting hysteria of so many contemporaries, but, it just doesn’t gather any real momentum.

One of my favourite films of recent weeks is The Dead Room, a film which is comparable to The Unfolding¸ but what the former did so right, is where the latter goes so wrong. It lacks that rounded character development, and the spark necessary to grip you by the lapels and have you perched on the edge of your sofa. The point of the apocalypse backdrop seems largely superfluous, while the introduction of a couple of new characters part-way through the film, fail to breathe life into what’s a disappointingly stale tale of the supernatural.

Round of applause to Signature offshoot Precision Pictures who have certainly created an eye-catching sleeve for KILLER INK, but it’s a shame that the contents within yield only a weary sigh of boredom. Originally titled Anarchy Parlor, the notion of a group of backpacker friends in Eastern Europe certainly conjures up comparisons to Eli Roth’s Hostel (2005), but that’s where the similarities end aside from perhaps igniting a desire to visit the Lithuanian city of Vilnius in the same way Roth’s film gave you an urge to visit the Czech Republic.

When this gang of travellers meet the seductive Una (Sara Fabel), two of them take up her offer to visit The Parlour, a notorious tattoo joint in the backstreets of the city. Here, they meet The Artist (Robert LaSardo), a gentleman whose sinister plans are about to be unleashed in the most gruesome fashion.

The combination of boobs, blood and beastliness is usually an ideal mix to ensure some quenching of our rabid thirst for horror; in Killer Ink though, it’s simply not as shocking or voyeuristic as it thinks it is. The whole ninety minute picture feels desperately drawn out, while my notes are punctuated repeatedly by endless unanswerable questions pondering who these kids are, why they’re there and why anyone should care what happens to them. It’s all so facile with zero substance that leaves your emotional investment in the film at a big fat zero. 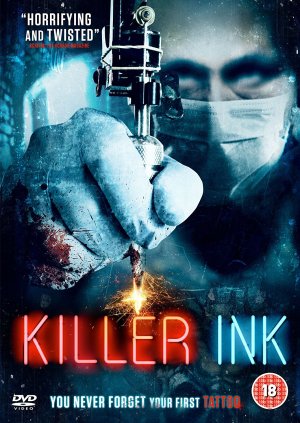 With a setting of Crabbe Creek, and an optimistic playful score to welcome us in, it’s obvious that CLAWS is a monster movie content in tipping its hat to some fifties roots. When a meteor storm crashes down, destroying a calm lake in the remote countryside, a centuries old beast is awakened. As the people of the small nearby town find the devastating destruction, they rally together to put right the damage, albeit none the wiser that there is a crazed-crustacean-monster on the loose.

In about six-month’s time, Roger Corman’s Attack of the Crab Monsters will celebrate its sixtieth anniversary, and that was at the forefront of my mind as I watched Brett Piper’s movie. Piper’s long legacy in crafting no budget cinema speaks for itself, and here I really he managed to capture that cheese-laden naivety that was the lovable aspect of Corman’s early creature-features. But then again, for a director rooted in drive-in culture with a CV that boasts such schlock-tastic fare as A Nymphoid Barbarian in Dinosaur Hell and Screaming Dead, I didn’t expect anything less.

Lean in its running time (though Corman’s film was sixty-two minutes!), and using a couple of clever tricks like shooting the majority of crab sequences at night to mask any shortcomings in the CGI, there’s a canny exhibition of Piper’s experience at play here. Budgetary constraints are a little apparent at time, no more so than in the occasionally muffled dialogue, but on the whole this is a creature-feature that warms my heart.