As I’m sure you’re all aware by now, I am indeed a post-millennial creature-feature apologist. It’s not something I’m proud of. I have from time to time sought therapy to wean me off this barrel-scraping addiction to such low rent fodder, but alas here in 2016 I still elicit a squeal of excitement upon the announcement of such dreck as SHARK EXORCIST.

Thankfully though, I owe the aforementioned title a deep level of gratitude, for not only has it given me a very belated slap around the chops, but it’s also acted as that long awaited moment of clarity, because let’s make no bones about it people, Shark Exorcist is an execrable piece of detritus.

If I had to try an assemble some kind of synopsis from the events of this fifty-eight (yes, you read that right) minute picture, then it’s pretty much contained within the first five minutes where we discover a Catholic nun by the name of Ms. Blair is wanted for the brutal torture of thirteen boys and girls. As she wanders catatonically through a graveyard, there’s a murder-lakeside-shark orientated turn of events, which has the knock-on effect of possessing the water-based creature.

Anything else that occurs within the short running time is largely irrelevant as you’ll be past caring very early on. Swimmers get attacked, although the shark is never seen above water, while their injuries resemble an accidental spillage of strawberry dessert sauce. Meanwhile a reality show called Ghost Wackers gets shoehorned in, as does the titular exorcist who ironically has The Art of Acting by Stella Adler on his desk. Wince-inducing dialogue is thrown around like “That’s the thing about dying, it’s a real buzzkill”, and when the actual casting out ceremony does get going, it’s over before you can say Father Merrin.

Whatever you do this weekend, do not browse the DVD section in your local supermarket and let your eye gaze over the cover of Shark Exorcist. I guarantee your heart will get the better of your head, and all you’ll be left with is an hour that would be more enjoyable have root canal surgery without the anaesthetic. Seriously, you have been warned, it’s the nadir of creature features. 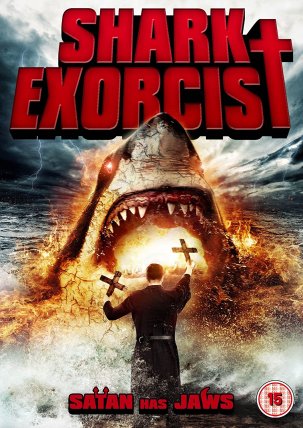 Now that’s out the way, we can get onto the penultimate Frightfest Presents title of the summer, LANDMINE GOES CLICK, which although not reaching the heights of its peers like Curtain, Estranged or Last Girl Standing, it does come with a tentative DTV Junkyard seal of approval, albeit with the caveat that it’s not quite as good as everyone seems to think it is.

Armed with a simple premise, Levan Bakhia’s feature sees three American tourists backpacking through the lush landscapes of Georgia, when following a mic drop moment of brutal awkwardness, one member of the party, Chris (Sterling Knight), finds the weight of his foot situated on the top of a landmine. As revelations continue to spill out, the trio become a duo and attracted the attention of a passer-by walking his dog, whose intentions may not be as friendly as they first thought.

I found so much to like about Landmine Goes Click, that by the end of it I’d almost forgotten the moments of frustration contained within it. After an opening twelve minutes or so, by which many genre filmmakers could do with learning a lesson about how to concisely establish a narrative with leanly written exposition, Bakhia’s film moves onto the second of its three acts. Shot in the isolation of the Georgian countryside, it takes up the bulk of the films running time. Dialogue heavy, confined to the one location, and littered with compromise, demands and sadistic posturing between the three characters, it will naturally draw heckles of “Get on with it!” from a percentage of the audience, and I have to say it is overlong and devoid of the tension that it needs to make it into a really memorable sequence.

Whatever you tolerance level of that aspect of the movie, it’s essential you stick with it, as I genuinely believe the payoff is one of the most deliciously structured scenes to hit a DTV’er this year. Fraught with tension, dynamism and genuine horror, it’s a climax that stays with you, and one that lifts a movie that could so easily have toyed with mediocrity, into a must-have purchase.