I’m such a sucker for vehicular hunter / prey themed movies. The ironic thing is, once you’ve seen Steven Spielberg’s Duel, is there any real point in continuing this quest. It’s the pinnacle, right? Irrespective of that artistic high though, I find myself still drawn to what is essentially the same template, only rehashed with the occasional dash of originality. The Joyride trilogy is an undoubted highlight, so too is Black Cadillac, a real Zombie Hamster favourite from John Murlowski, while the same goes for Mark Tonderai’s Hush, a rare British entry into this natty little sub-genre.

JUGGERNAUT, formerly Wrecker, is cut much from the same cloth as we find that best friends Emily (Anna Hutchison) and Leslie (Andrea Whitburn) have decided to embark on a road trip to get away from it all. When Emily makes a decision to turn off the busy highway onto a desert road – seemingly a quicker route – all hell breaks loose. They soon find themselves the target of a mysterious tow truck that forces them into a dangerous game of cat and mouse. Harrowing escapes and deadly situations turn their idyllic getaway into a living, breathing nightmare.

DTV legend Micheal Bafaro is undoubtedly the draw to what’s on the face of it, an unremarkable, and currently over-priced direct-to-video title. The helmer first struck a chord with us by scripting the Thomas Ian Griffith mountain resort based classic, Crackerjack, before stepping behind the camera to churn out such high quality schlock as the Malcolm McDowell led The Barber. With Juggernaut he succeeds in taking the epitome of formulaic, and peppers it with enough intrigue to draw you in and hold you there. Having said that, those of you with a boner for a little car porn will undoubtedly groan in ecstasy anyway, at the growling red Ford Mustang the girls drive as it winds through the sparse landscapes of British Colombia.

Despite there being much to love, the predictable nature of proceedings may well infuriate the masses, but Bafaro is wily enough to mix things up to such a degree that even in those rare moments of finger-drumming staleness, there’s something only just around the corner to spice it up, which serves to make this a highly recommendable release.

After last weeks’ overlong diatribe about the critical black hole in which FrightFest films descend into, coupled with the lack of promo for Estranged, it was pretty sweet to see the FF Twitter feed punctuated by some decent awareness for the latest batch of newbies, one of which is EMELIE. The notion of a horror movie with a babysitter as a focal point joins Juggernaut with a resigned yawn, a check of the watch and a Ray Cameron declaration of “Thrill me”. With the awesome, yet criminally underseen Babysitter Wanted out in recent times, not to mention The House of the Devil et al, Michael Thelin’s film would have to offer something special to crack that upper echelon of superiority, and it very nearly did, before ultimately falling short.

The Thompson’s, a loving family living in a peaceful suburb are the very definition of wholesome normality. On the eve of their thirteenth wedding anniversary though, their usual babysitter has to cancel, leaving them to call upon a new girl who seems like a dream come true. As the night creeps on, the kids slowly begin to realise something is very wrong, and this woman is quite clearly not who she claims to be.

The fulcrum of Emelie is undoubtedly the hypnotising performance of Sarah Bolger as the titular character. Her eyes contain such a malicious evil, in a role that could easy have swung the way of scene-chewing hamminess, instead of understated villainy. The kids too are quite excellent; the antithesis of the typical child actor – naturalistic, flawed and measured. Meanwhile the decision to give the film an almost real-time flavour really works to its benefit as well, as the babysitter’s moments of eye-shielding rebellion escalate in jaw-dropping fashion at a nicely timed pace. So far, so commendable, but the last twenty five minutes seemed to stagnate just at the point it should have been reaching a crescendo, and the film descends into the realm of predictability and eye-rolling plot developments. I’d still implore you to give it a look as there is a great deal to like about it, but just be mindful of keeping your expectations in check. 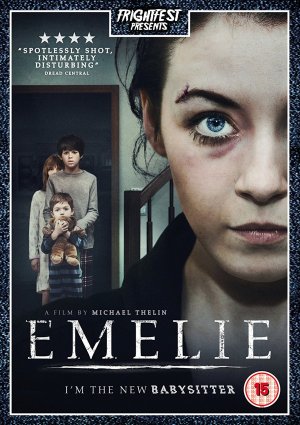 The UK’s own Signature Entertainment has been quite the success story since their inception a few years back. Initially set up with a remit to seemingly just take a chunk of the schlocky DTV market, they’re now expanding into theatrical distribution with some mighty fine pick-ups like Man Down with Shia LaBeouf, and Colonia with Daniel Bruhl. Their heart still lies in direct to video it seems, especially with the introduction of offshoot label, Precision Pictures, set up to specifically take control of the very best of the non-Theatrical movies, of which an early title is HACKED.

After receiving a grant for her graduate thesis, Elizabeth Benton (Melanie Papalia) longs onto a video chat site known as The Den, on a mission to explore the habits of its users. During one of her random interactions, she watches in horror as a teenage girl is gruesomely murdered. While the police dismiss it as a viral prank, Elizabeth takes it upon herself to find the truth. Her life begins to spiral out of control as she gets pulled in to the darkest recesses of the internet, eventually finding herself trapped in a sick and twisted game.

In the black hole of distro limbo since appearing at FrightFest EIGHTEEN months ago, it would be easy to cast aside Hacked (or The Den as it was known) as another Unfriended rip off with its fluid POV movement from desktop to smartphone to tablet. Thing is, it actually pre-dates Leo Gabriadze’s film, and there’s a good argument for it being superior to it as well. With the appearance of Ratter last week, there’s little doubt that the cyberspace populated world is forging a bold stamp in the horror genre. Whereby the prevalence of found footage largely existed due to the affordability of the handheld camera, it only seems natural that this evolves into a genre that encompasses current technology. If it injects a little bit of new life into the maligned found footage film then surely that can only be a good thing, and certainly Hacked does its level best to maintain a high standard.

It’s not perfect though, as you can’t help but feel that something rooted so deeply in the plausibility of its framework descends into disappointingly fanciful territory during its final reel. Having said that, it’s a picky gripe about what is a short and sweet little scare-fest.