You’ve heard of The Black List, right? I’m not referring to the James Spader starring TV show, or the McCarthy-era Communist-themed witch hunt. THIS Black List is focused on the world of unproduced screenplays. It’s an annual survey of the most liked unproduced scripts, and it’s been published now for the last ten or so years. The list, which is published every December, numbers just a couple shy of a thousand now, with just under a third of these having been made into feature films. Argo was on the list, as was The King’s Speech, not to mention current darlings The Revenant and Spotlight.

Not every film that enters production from this catalogue goes on to flirt with Oscar success though. Take this weeks’ first DTV Junkyard candidate, FREAKS OF NATURE. With a script that dates back to the 2010 Black List, it eventually wound up before the cameras in 2013, shooting under the title Kitchen Sink. Subsequently re-titled and then pushed around the Columbia vault like a mouldy sandwich, they finally gave it a begrudged theatrical run with minimal support. They didn’t even bother producing lobby posters.

Such a despondent pre-amble surely demands an enthusiastic u-turn in the shape of the movie finding its spiritual home on DVD, where it’s embraced with welcoming motherly arms as I tell you it’s an unheralded gem that demands your attention. I’d like to do that, but then I’d be lying.

Freaks of Nature welcomes us to Dillford, where only days ago everything was peaceful and it was business as usual; the vampires were at the top of the social order, the zombies were at the bottom, and the humans were getting along in the middle. But this delicate balance was ripped apart when the alien apocalypse arrived in Dillford and put an end to all the harmony. It’s up to three teenagers – one human, one vampire and one zombie – to team up and figure out just how to get rid of these interplanetary visitors and restore order to their little town.

Produced by Jonah Hill with a screenplay from Oren Uziel who penned 22 Jump Street as well as the forthcoming Men in Black 4, I was really surprised to have such a stony-faced viewing experience with this. There are so many aspects of it which in theory should combine to deliver something magical; its excellent supporting cast of Bob Odenkirk, Joan Cusack, Dennis Leary and Patton Oswalt, a really hot soundtrack, and cool painted artwork – but it struggles to gain any momentum. There’s a thinly-veiled message about identity that rides through the spine of the movie, but like the film itself, it rarely piques your interest to leave any kind of lasting impression. 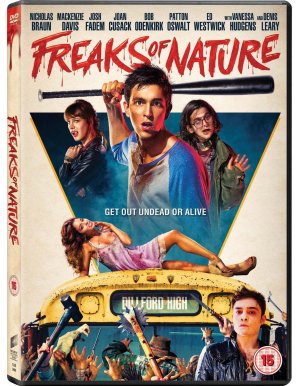 A write-up about a New Zealand lensed low-budget gore film seems to demand a Peter Jackson mention at some point. So there we go. In I SURVIVED A ZOMBIE HOLOCAUST we discover that the crew of the schlock film Tonight They Come! are enduring a pretty torrid shoot. Filming in the middle of nowhere, things go from bad to worse as they become struck down by a mystery illness. With members of the production team dropping like flies, a replacement runner in the shape of geeky Wesley Pennington (Harley Neville) arrives on set just as this strange bug begins to turn zombie extras into the real shuffling undead. Now it’s down to this accident prone nerd to lead a band of survivors to safety.

Despite getting a lot of positive buzz following its UK debut at Frightfest in 2014, including a five star – yes, FIVE star – review from Nerdly (so they’re saying it’s as good as The Exorcist, Rosemary’s Baby and Halloween?), I couldn’t help but feel a little bit underwhelmed by Guy Pigden’s film. With a cast of characters cribbed from every zombie picture since the dawn of time, we have to wait a full forty-five minutes before any zombie-led antics of note, while prior to that it’s a meandering first half full of obvious slapstick and dragged out exposition. To refer to that infamous bearded Kiwi once more, this picture misses the gonzo insanity of Jackson’s early work, with an overriding vibe of carefully stage managed comedy and gore set-pieces. Admittedly the red stuff does look mighty fine here, with nice practical effects blended (almost) seamlessly with CGI, not to mention the grossest rotting penis you’re likely to see. Granted, film set based horror-comedies are a novel idea, but I’d still take the unhinged insanity of Gingerdead Man 2: Passion of the Crust any day over this movie. 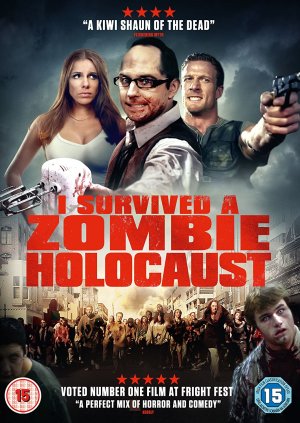