Lizzie Borden, that icon of American folklore who was tried and acquitted for the 1892 axe murders of her father and stepmother in Massachusetts has been portrayed in a variety of films; from Paul Wendkos’ The Legend of Lizzie Borden from 1975, to last years’ passable Lizzie Borden Took an Ax with Christina Ricci.

The latest spin on this fabled character comes courtesy of Mike Rutkowski, a seasoned PA on films like The Hunger Games and Earth to Echo, THE HAUNTING OF BORDEN HOUSE marks his feature film debut. It finds a group of Brown University students moving into an off campus residence for the semester. Suspicious of the home’s owner, one of the girls feels a strong connection to the house and finds herself at the centre of a deadly nightmare.

If you’re a serial bottom-shelfer like myself, you’ll be fully au fait with all the relevant suppliers of schlock, be it Safecracker, 101 Films, Koch Media or Signature. Point Blank meanwhile really seem to struggle with peppering their regular releases with any aspect of quality. There is the occasional little ray of sunshine; Halloween Haunting I gave begrudging praise too, while the much maligned Hospital received cautious plaudits! With Rutkowski’s film however, it’s fit merely for a shrug of the shoulders, a wrinkle of the nose and shake of the head.

The main issue for me is it has all the hallmarks of a horror movie made to order, but without the artistry, ingenuity or ambition to make it stand out. Many DTV horror films these days are made in respect to themes suggested by retailers, rentailers and streaming companies; and the current topic du jour is supernatural related fare, so it’ll come as no surprise to see this schlocker was originally called American Poltergeist. Bland but true.

At barely seventy minutes minus credits, Borden House still struggles to engage you as much as you’d like. Dialogue is clunky and unimaginative – “you mean you don’t know you live in the infamous Lizzie Borden house?” – while various issues in the plot stretch the boundaries of plausibility to breaking point; one car not starting is fine, but three? There are flashes of technical proficiency with a few nicely framed shots, but only seconds away is a slice of poorly recorded audio or a hammy performance to dash any hope of this feature rising from the doldrums of mediocrity. 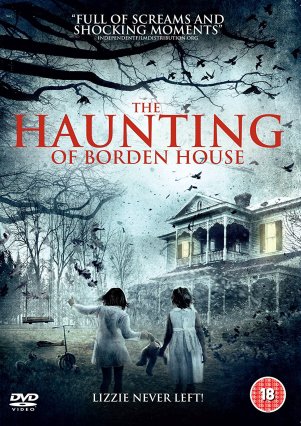 War films are back in vogue; the last five years have seen more of this genre get released than in the twenty years that went before. Acclaimed though many of them are however, there has been a noticeable dearth in DTV-orientated fare in favour of strait-laced true stories and Oscar-bait. The power of films like Lone Survivor and Zero Dark Thirty is undeniable, but I do miss that comic book / all guns blazin’ style of cheese-gasm that littered the eighties thanks to the crazy Filipino and Italian film industries.

WAR PIGS doesn’t quite meet the bullet-quota of those Macaroni combat films or the Pinoy orgy of machine gun bloodletting, but it does present a more popcorn-flavoured vibe to proceedings. Disgraced World War II army captain Jack Wosick (Luke Goss) is given the opportunity for redemption when asked to lead a rag-tag unit of misfits known as the War Pigs on a secret mission to go behind enemy lines. They must uncover and capture a Nazi developed Super Weapon – a massive artillery cannon that would give the Nazis an insurmountable advantage against the Allies. With the help of Captain Hans Picault (Dolph Lundgren), a German Anti-Nazi serving with the French Foreign Legion, and Colonel AJ Redding (Mickey Rourke), a battle hardened war veteran, Jack must train, lead and earn the respect of his new squad to become a functioning reconnaissance unit.

It had me at ‘rag-tag unit of misfits’! Ryan Little has previous in the war film genre after shooting the underrated and overlooked Saints & Soldiers trilogy of movies, and brings to War Pigs a very experienced hand at this style of picture. Lundgren’s French accent that has a smidgeon of Swedish and a dash of American is forgivable, as is the cowboy hat that Rourke insists on wearing; for a DTV movie of this ilk, the actors with the reputations have a propensity to phone it in, but here the star turns are all on form, none more so than Luke Goss who really shows he can act. Cliched, old school – and some may say old hat, War Pigs won’t win over any high-brow war movie aficionados, but as a welcome reminder of what used to be a direct to video staple, it comes with the Junkyard seal of approval. 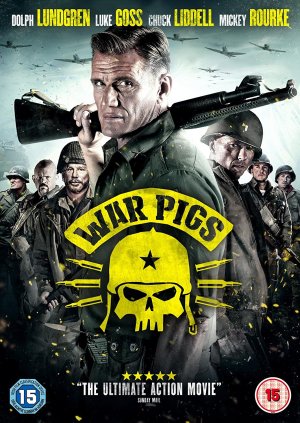