Written and directed by Dennis Widmyer and Kevin Kolsch, STARRY EYES entered the public consciousness with a Kickstarter campaign back in the spring of 2013. It’s never a case of opening the crowdfunding window, lying back and waiting for the dollars to roll in with these things. As Widmyer told the Hollywood News, “You have to almost become like a politician running for office, you’re stomping every day”. Nonetheless, it was a successful venture, helped along by the support of their friend Chuck Palahniuk, who came up with the idea of a perk that would see one hundred donors acknowledged in his new novel. With the fifty-thousand dollars raised, and the support of Dark Sky Films in the bag as well, production began on a film that would be heralded as this year’s must see horror flick.

Determined to make it in Hollywood, Sarah (Alex Essoe) spends her days working a dead-end job and attending countless casting calls in the hope of catching her big break. After a series of strange auditions, Sarah lands a leading role in a new film that’s being made by a mysterious production company. She is about to learn that stardom comes at a price.

A horror film living up to the hype? Yes, yes, it’s true – for me anyway, though I’m sure that this could easily be a marmite movie; a slow burn that will lose the mainstream crowd, while us hardcore horror hounds coo over its brilliance. It’s Alex Essoe’s film; present in almost every scene, her gradual unravelling is impossible to take your eyes off. From the perky, yet perpetually peeved employee of Big Taters, nervously stuttering through auditions, she exudes an exhausted desperation. Her innocence and naivety makes the audition process for The Silver Screen, and the transformation in her behaviour all the more shocking.

Widmyer and Kolsch set a purposefully gradual tone, and in doing so allow the character of Sarah to grow, establishing a level of depth to her psyche that most genre films don’t come close to. Every scene of this patient, near hour long build up is worth it, as the final third may well be the most perfectly executed piece of horror filmmaking that will grace your home entertainment system this year. Comparisons to Lynch, Polanski and Cronenberg litter many a review, but for me it’s the originality that demands to be underlined with a thick black sharpie. With its impeccable synth score, the occasional retro nod (the title card), and a stabbing satirical commentary on the vacuous Hollywood machine, Starry Eyes is the business.

From Beneath seems to have been a perennial fixture on the forthcoming DVD schedules for about a year now, acquired by those (checks libel parameters) gentlemen at Three Wolves. Now though, it’s hopped on over to New Horizon Films which results in the benefit of it actually gaining a release, although there’s the downside of a needless title change to LAKE FEAR, and the addition of some very bland artwork. A first time outing for director David Doucette, he began his career making short films whilst a student at Carleton University. After two years working as a production assistant on various film and television sets, Doucette chose horror as an entry point for his directorial debut – not he says as an easy way in, but due to a lifelong obsession with the dark arts.

Sam (Lauren Watson) and Jason (Jamie Temple) are on vacation, when the urge to take a dip in a nearby pond becomes too much to resist. As Jason begins to swim, he’s bitten by a strange leech-like organism. When he attempts to remove the creature, part of it rips off and crawls inside his leg. As time passes, and the injury worsens, Jason finds himself hallucinating due to the severity of the rapidly spreading infection, while the other people he and Sam are holidaying with seem to have mysteriously disappeared.

Doucette’s body horror brings about this week’s second mention of David Cronenberg, though it would be tough not to make reference to the great man considering the occasional doth of the cap in Mr. C’s direction during Lake Fear. This succinct little two-hander is heavy on the dialogue and to some degree a bit of a patience tester. Music to my ears, but the lack of on-screen grue may well have the majority nodding off in a state of unfulfilled bloodlust. For those that appreciate low budget ambition, Lake Fear carries a pervading sense of unease – and credit to the two leads for establishing a taught feeling of helplessness and isolation. We’re not privy to aesthetically pleasing visual delights here (save for a gorgeous bathroom based blood-dripping scene), but with some aural creativity and tight pacing, Doucette’s film delivers a genre treat that exceeds its generic looking expectations. 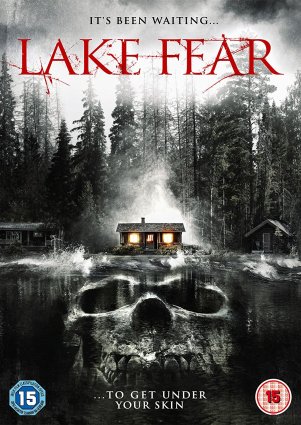 Finally this week we have THE COVEN, an independent British horror movie which seems a bit of a family affair with John Mackie in the director’s chair and Jayney Mackie on writing duty, while Cloe, Holly and Billy Red Mackie all star – not forgetting Rory Mackie on the digital imaging there. In Highgate, London, five teenagers are intrigued by their teacher’s stories of a clearing within the nearby Queen’s Wood, and of thirteen ancient oak trees officially known as ‘The Coven’. Here, seven people vanished on Halloween night a few years before. With this in mind, the teens decide to see if they can survive the night in this cursed place, and plan a secret sleepover in the exact location, on the very same night.

This wasn’t good. In fact, if I was of the attention seeking persuasion to list a year end collection of the worst films of the year, this would undoubtedly feature. Aside from the glaring deficiencies in script, direction (check out the step ladder in the background as the kids ‘leap’ over a railing), and just genre specific attributes of tension and atmosphere, the core issue lies with the casting. I think it must surely be impossible to cast a more indistinguishably bland group of teenage girls. The mumbling! What’s with it? One girl in particular, seemingly trained at the Benicio Del Toro school of mumbling is like listening to Kenny from South Park. The girls have no redeeming features, all they seem to do is deliver a flat, monotone recital of the dialogue; in fact you wonder at times if this isn’t some long lost parody of The Craft, such is the inclination to find humour from the open mouthed bewilderment it leaves you with. I’m sure 4Digital will reap the benefit of its artistically inaccurate cover with appealing price point, but this shoddy piece of work goes beyond the bottom shelf, edging swiftly towards the clearance bin, and onto the recycling plant.