A decent if barren Blu-ray for a superlative low-budget monster flick.

The bad taste chuckles generated by its Troma-esque bursts of vulgarity aside, at its core Francis Teri’s THE SUCKLING (1990) is a mongrel of classic horror movie tropes and conventions. But that’s not a bash – not by any stretch. If anything, Teri’s patchwork of familiar beats and situations is far more demonstrative of a studious understanding of genre form and convention than the work of an ideas-barren hack: his brash, Texas Chain Saw (1974)-inspired opening crawl; tense, Night of the Living Dead (1968)-style under siege set-up; and striking, Alien (1979)-aping creature design are all as well orchestrated as any of the totems the helmer gleefully cribs from. Distilling such prestigious influences into a diverting little picture that is, on the whole, incredibly effective, Teri presents himself as something of an unfulfilled talent. Amazingly, The Suckling is his first and to date only stint wielding the megaphone.

Built around a premise that’s at once silly, shocking, and lip-smackingly tasteless, Teri’s screenplay offers a Larry Cohen-tinged mix of B-movie excess and slivers of social commentary; a comparison all the more prominent thanks to the pair’s shared ‘pregnancy gone wrong’ ground. Indeed, with a hideous, mutated foetus at The Suckling‘s centre, drawing a parallel between it and Cohen’s own monster baby landmark, It’s Alive (1974), is unavoidable. However, if Cohen’s seminal, ripped-from-the-headlines text is a nuanced, well-thought out dissertation on what it is to be a parent, The Suckling‘s abortion polemic is a spit-strewn screech from an armchair anarchist. But again, if that sounds like a dig, it isn’t.

While it would have been nice for Teri to treat The Suckling‘s on-the-nose moments of topicality and metaphor with more subtlety, nuance, and commitment, him letting them fall by the wayside after the film’s first act actually frees the rest of it. After all, The Suckling‘s real hook is not Teri’s attempts to instigate a pro-choice debate, but his unflinchingly grim tone, character focus, and potent flights of low-brow fancy.

Deeply upsetting, the sense of despair that hangs over the denizens of Big Mama’s dilapidated brothel is gut-knotting. Our eyes and ears belong to Rebecca: a teen dragged to the Brooklyn-based den of inequity by her pushy and feckless boyfriend, Phil (Michael Logan), who wants her to get rid of the bun they’ve accidentally put in the oven. A warm and relatable performance from Lisa Petruno (Troma’s War (1988)), Rebecca’s thrusting into this seamy micro-universe introduces us to a surprisingly detailed troupe of kooks and wrong ‘uns, including prickly hooker Candy (Janet Sovey); the noble Sherman (Time Martin Crouse); and hot-headed ex-con Axel (Frank Rivera, whose notable post Suckling credits are a pair of PM Entertainment-produced actioners, Final Impact (1991) and Recoil (1998)).

Each attempting to make the best of their on-the-fringes existence (which, as Teri’s aforementioned opening card gives away, is doomed from the beginning), the whorehouse’s eponymous proprietor perversely offers their sole bastion of hope. Essayed by Michelle Moore, Big Mama sure lives up to her name. Mumsy yet tough, she’s an assertive but compassionate force, as demonstrated in the aftermath of The Suckling‘s deliciously manky abortion scene when Mama offers some sage, comforting words to a still woozy Rebecca, despite nonchalantly having the girl’s aborted foetus flushed down the toilet minutes earlier.

Of course, the usual bickering and in-fighting soon destroys even the sturdiest alliances once Rebecca’s discarded offspring reappears; an exposure to toxic waste in the sewer system creating a blood-thirsty mutant (with former Fangoria mainstay Michael Gingold filling the impressively rendered rubber suit, of all people). It’s absurd, without doubt, but Teri crafts some powerful and nightmarish scare sequences following the creature’s awesome, ooze-laden inception (the first of many standout spots from FX man Ralph Cordero, who previously supplied similarly cut-price carnage on Combat Shock (1986)). The sudden, Psycho (1960)-shaded offing of a character you wouldn’t expect, and a buttock-clenchingly tense, cat n’ mouse reconnaissance through the brothel’s cellar are top-drawer jolt-pieces; and Teri’s loopy final stretch – a family reunion of sorts – is a remarkable bit of spectacle.

Last available on British shores in a trimmed (by two seconds) VHS from those sorely missed “purveyors of splatter that matter”, Vipco, 88 Films’ inexpensive, uncut Blu-ray is a welcome reissue. Transferred from The Suckling‘s original 16mm elements, 88’s scan looks about as good as one could expect such a grime-ridden, shot-for-buttons piece to look. Never a particularly colourful flick, the palette on display here seems very naturalistic, the biggest flaw still the softness to Harry Eisenstein’s photography; a problem that plagued Elite’s earlier US DVD, and rooted in The Suckling‘s impoverished production. Sound comes via an OK LPCM stereo track. Alas, an all-too-brief chat with the film’s producer Miljan Peter Ilich aside, extras are non-existent. Swiftly touching upon The Suckling‘s making (and its stablemate Flesh Eating Mothers (1988), also out now from 88), it’s a shame it couldn’t be longer or accompanied by a commentary or two. Decent special features are just as important as the movies they accompany, you know? 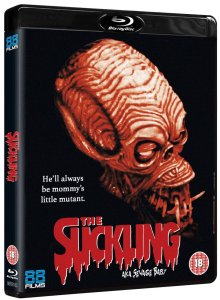 THE SUCKLING is out now via 88 Films