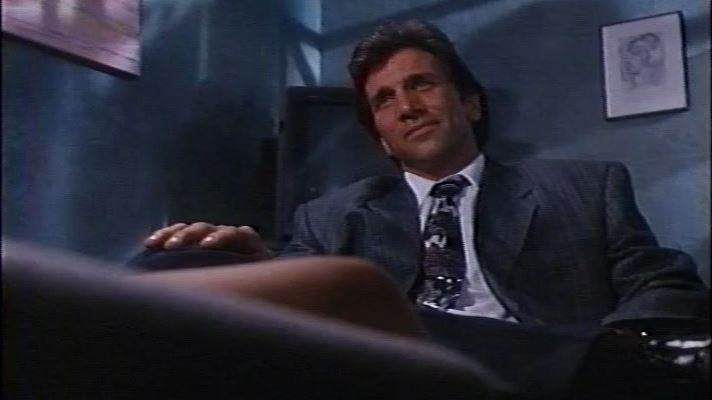 Dave heads back to simpler times when dating was less about GPS and more about VHS.

Writing in Entertainment Weekly prior to its US home media debut, Glenn Kenny wrote that “SEXUAL INTENT strains credulity in a way that’s frankly delightful”.

At first glance, John McKee (Gary Hudson) is affable and charming. He’s a doctor at Cedars Sinai to boot, but beneath his personable façade lies a money-hungry conman who’s content to exploit a litany of vulnerable women and steal every penny they possess. His latest victim is June Baldwin (Sarah Hill – her sole feature role): a single mother who’s just come out of an abusive relationship with her ex, and John wastes no time in seizing the opportunity to worm his way into her affections.

However, when the inevitable chicanery happens and June finds herself jilted at the altar, she takes matters into her own hands, embracing the definition of ‘a woman scorned’, and stopping at nothing to ensure that this two-bit hustler gets a long-awaited comeuppance.

In its defence, Sexual Intent rattles along at a fair clip, spending barely a third of its running time on John’s seduction, swindle and separation from June, before a narrative split takes us down two fascinating avenues which flesh out both principal characters. In terms of John we learn about his predilection for self-help motivational tapes and a reliance on psychotherapy (thanks to the Tweedian Michele Brin playing his shrink), and in June we get to embrace her evolution from soccer mom to retaliatory bombshell. Admittedly, this latter transformation is a little fanciful. The path from meek naivety to wily private investigator brings forth an occasional groan but, as Glenn Kenny mentioned, farfetchedness is a common symptom of Kurt MacCarley’s script that might tarnish the credibility of his story but works as an indulgent charm.

It’s cast well, especially from a female perspective with Hill, Brin and Christine Sholle (as John’s on / off lover Terry) playing well-written characters that ooze depth and generate empathy. Hudson, on the other hand, is a little awkward. He’d hit pay dirt in this era, with star turns in Jag Mundhra’s Wild Cactus (1993) and Lawrence Lanoff’s Indecent Behavior (1993), both of which came either side of Sexual Intent. Here, though, he’s goofy instead of gloaty and flawed when you feel he should be fierce.

One aspect that really elevates the movie is a string of video dating soundbites that MacCarley has sewn into the narrative. They’re an excellent bullet point at the beginning of each chapter, throwing explosive one-liners (“All men are shit!”) around like hand grenades, and enlivening a picture that’s rarely anything other than ordinary.