Prior to walking away from overseeing their erotic imprint Torchlight, David DeCoteau had teased the launch of two further subdivisions for Charles Band’s Full Moon Entertainment in the summer 1994 issue of Alternative Cinema, a then-new cult movie magazine founded by frequent collaborator J.R. Bookwalter. The first was the self-explanatory Teen Sci-Fi, which, in a move typical of Band’s obsession with branding, eventually came to be as Action eXtreme: the tech-based, adolescent side label of Full Moon’s pre-existing family offshoot Pulsepounders, itself born of kiddie strand Moonbeam. The second was Full Moon Cyber: a hard-edged outfit that DeCoteau envisioned as a home for dark, goth-y action pictures pitched somewhere between Clive Barker and The Crow (1994). While Full Moon Cyber sadly never came to be, it was clearly an idea DeCoteau held great affection for, with a few conceptual elements going on to inform subsequent masterworks like Speed Demon (2003) and Beastly Boyz (2006). In fact, the very first film DeCoteau made following his Torchlight tenure was somewhat indebted to at least one of Cyber’s proposed influences, the helmer wryly describing 1996’s PREY OF THE JAGUAR as his skid row answer to The Crow and Batman (1989).

Having returned to Los Angeles to edit his Romanian nudie Bikini Goddesses (1996), no sooner had DeCoteau’s feet touched the tarmac of LAX than he was offered Prey of the Jaguar. Exec produced by stockbroker/conman/aspiring movie mogul Jordan ‘The Wolf of Wall Street’ Belfort, it was very much a “ducks in a row” situation. As DeCoteau tells it, Belfort and his co-producers, father and son team Harry and Brian Shuster of Hit Entertainment, needed a non-union director with a decent level of experience to tackle Jaguar quickly and efficiently and DeCoteau ticked the requisite boxes perfectly. And fittingly, ‘quick’, ‘efficient’ and ‘perfect’ are the operative words for this down n’ dirty superhero flick.

Solidly done, Prey of the Jaguar is the work of a director firing on all cylinders. For one, it’s extremely fast paced with nary a second going by without something happening, be it a pocket of drama or a flurry of punching, kicking, and shooting once Maxwell Caulfield’s ex special forces agent suits up — as the eponymous Jag — to avenge the murder of his family by a psychotic drug baron (a gleefully unrestrained turn from Trevor Goddard). For another, it’s a technical joy. As well as staging the bursts of beatings and bullets with tremendous flair (Goddard’s opening jailbreak and Caulfield’s siege on a warehouse are the thrilling, ruthlessly assembled standouts), DeCoteau and semi-regular cinematographer Howard Wexler (Dreamaniac (1986), Absolution (1997), the helmer’s sorely underrated Poe cycle) forge an atmospheric, comic book look with little more than a backlight, a smoke machine, and a cornucopia of Dutch angles. Jaguar feels like a live-action cartoon and it’s fabulous — though, really, the inherent grittiness of its many backstreet locations bring the film closer to the ragged textures of Mark Goldbatt’s Dolph Lundgren-starring iteration of The Punisher (1989) than the opulent, inky sheen of the Alex Proyas and Tim Burton pictures that DeCoteau professes to have been inspired by.

With that in mind, in terms of where it fits among DeCoteau’s meaty resume, Prey of the Jaguar is part Lady Avenger (1988) and part Puppet Master III (1991); a mix of scuzzy vigilante violence and origin story derring-do, wrapped in the same revenge-soaked framework. It’s bleak and mean on occasion, yes, but there’s a rousing ‘go on son!’ quality to it. Caulfield’s phoenix-like rise from the metaphorical ashes elicits a fist-pumping sense of triumph by the time the credits roll; Goddard is an unflinching bastard you want to see strung up; and the broad performances by Jaguar’s distinguished supporting cast (Linda Blair! Stacy Keach! Paul Bartel!) offset the film’s gristle-strewn core with a waggish, pantomime-y vibe in keeping with DeCoteau’s pulpy aesthetic. 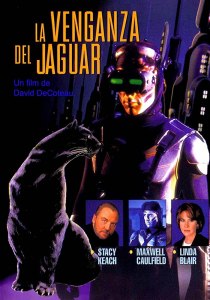