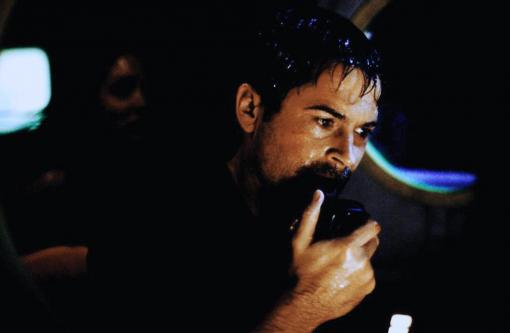 Matty’s words on this two star time-killer from the prolific Unified Film Organization.

Ostensibly ‘Die Hard (1988) on a cruise ship’ — or, you know, another Speed 2 (1997) — Jean Pellerin’s ESCAPE UNDER PRESSURE was done better by Jim Wynorski as the similarly themed Final Voyage (1999), which just about pipped Pellerin’s film to the post release-wise. Of course, in the murky, convoluted realm of millennial DTV distribution, which flick truly came first is anyone’s guess. Pellerin’s potboiler and Wynorski’s programmer both yield 1999 copyright dates, but the latter apparently premiered in Malaysian cinemas four months ahead of Escape Under Pressure’s opening in South Africa in February 2000. Their American home video releases further muddy the waters: Escape Under Pressure hit stateside TV via HBO in May ‘00 with a VHS and DVD bow following in November; Artisan dropped Final Voyage on tape and disc in the June between them. Either way, it’s mostly irrelevant: the pair of them were part financed and/or snagged and sold by Alan B. Bursteen’s New City Releasing, and Bursteen was more than happy to supply each movies’ distributor with a McTiernan-indebted shelf/schedule filler.

However, although Final Voyage is the superior offering, Escape Under Pressure ain’t a total write-off. It’s not good as such, but it’s an acceptable bit of fluff that should quench anyone’s thirst for cheap-o action. Stilted and boring for its opening half hour, Pellerin’s jankily scripted quickie jumps up a notch once Harry Van Gorkum’s nasty merc commandeers the ocean liner that hydro technician/unassuming hero Rob Lowe (cast prior to his stalled career getting a second wind thanks to The West Wing) has boarded to help save his floundering marriage. Van Gorkum’s motivation is some Ancient Greek artefact (which, as far as production value goes, looks closer to a bit of tat you’d find at a car boot sale than a priceless antique) that his greedy, art-collecting boss, Craig Wasson, wants but it doesn’t matter. Instead, just enjoy Pellerin’s mostly successful attempts to mask Escape Under Pressure’s budgetary and narrative shortcomings with immersive handheld camerawork and tension-building Dutch angles. They’re a little rough on occasion, admittedly, but these tried and true visual tricks aid the sense of frenzy that Pellerin seems to be aiming for during his moderately exciting set pieces. The bulk of the CGI on show is fairly well done too — even if the pulpy, vaguely 20,000 Leagues Under the Sea (1954)-esque design of the subaqueous stuff is at marked odds with the rest of the film’s aesthetic.

Produced by Phillip J. Roth’s Unified Film Organization, scenes for Escape Under Pressure were shot atop the Morris Dam near Azusa, California, and, as with Final Voyage, aboard the retired RMS Queen Mary, which has been permanently moored in Long Beach since 1967, serving as a hotel, museum, and tourist attraction.

Released in the UK as ‘The Cruel Deep’.