Matty casts his eye over Glenn Takakjian’s icky sci-fi horror, and the sharp-suited bad guy at its gooey centre. This one’s for you, Dr. V!

Many a great horror movie lives and dies by the strength of its bad guy. I mean, would bonafide classics like A Nightmare On Elm Street (1984) and Hellraiser (1987) be half as iconic if it weren’t for their awe-inspiring antagonists? And while it would be a stretch to call it great per se, METAMORPHOSIS: THE ALIEN FACTOR (1990) sure fits such a remit. Because every time the dastardly Dr. Viallini is on screen, this frothy sci-schlock programmer becomes a berserk work of essential, ham-laden genius.

The nefarious face of the Talos Corporation (you know, one of those shady conglomerates a la Weyland-Yutani or Umbrella), Viallini is a company man through and through; his actions are motivated only by what’s best for business, even if it contravenes his own morals and ethics. But as underling Dr. Nancy Kane (Katherine Romaine) points out, it’s not as if the sharp-suited Viallini has many anyway. “You’re a cold bastard!” Kane spits as the diabolical doctor casually informs her of an impending cover up.

He sparks up a cigarette, produced from a sleek golden case that sits atop of his plush mahogany desk.

His eyes narrow and he stares Kane down. An eternity seems to pass.

Calmly, Viallini picks it up and requests that the two stony-faced fixers he’s ordered be sent in. Finally he says, “I’ll ignore that last remark, doctor. Now you know as well as I that this entire project has been highly illegal from the start and you have been a willing part of it. I feel terrible about what has happened, but we must keep this within the family; or everything we have done and learnt will be for nothing [pause]. And Michael Foster will be worse off than he is now…” 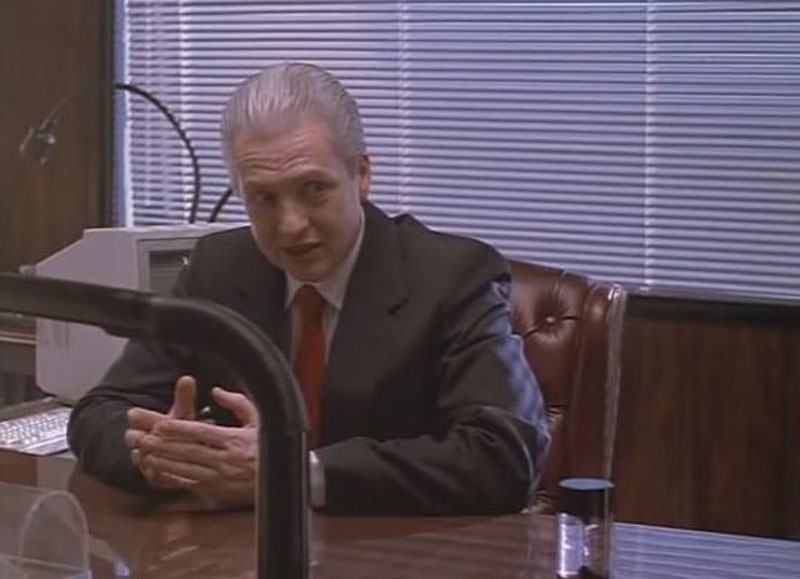 Of course, how much worse it can get for a bloke who’s already transformed into a tendrilled monster is anyone’s guess, but you get the point: Dr. V’s got a mean streak a mile wide. Having previously butted heads with Foster (George G. Colucci, credited as George Gerard) over the less than savoury use of an earlier experiment, the loafer-wearing Viallini appears to take a disturbing amount of satisfaction in the earnest biologist’s icky predicament. The result of a lab mishap, a cheeky kiss from assistant-cum-lover Kane as Foster noodles away with alien matter distracts him long enough for an infectious test subject to bite him; the Ghoulies-esque critter taking a chunk out of his hand after Foster inadvertently stabs it in the eye with a syringe. The chaos that ensues is body horror at its finest; a gorgeously gooey compendium of vintage Cronenberg, The Thing (1982), and The Incredible Melting Man (1977) as Foster slowly undergoes the titular metamorphosis, from man to carnivorous cosmic being.

Thanks to some truly startling make-up FX (supervised by Spookies‘ (1986) Vincent Guastini, who’d go on to ply his trade across The Taking of Deborah Logan (2014) and V/H/S Viral (2014)), the sight of a screaming Foster strapped to a gurney – his body twisted into a hairless mass of stretched flesh, fused together limbs, and protruding bone – is the stuff of nightmares. Granted, the rubbery pulsations might at first appear a little quaint to those who’ve come of age amidst the watershed gore of Saw (2004) and Hostel (2005), but, by God, they still pack a powerful punch. They’re visceral and near vomit-inducing, especially the moment in which the gloopy Foster lets rip with a technicolour yawn of his own. Considering how easily he smarms his way out of a potentially awkward encounter with the nosey daughter (Tara Leigh) of a sadly eaten employee, it’s perhaps unsurprising that the silver-tongued Viallini offers the most succinct description of Foster’s predicament, wryly remarking that “[he’s] begun to resemble some garden bug or slug”.

Conceived and filmed as a sequel to Metamorphosis producer Ted A. Bohus’ earlier cult hit The Deadly Spawn (1983) (the title change an insistence of Bohus’ production partners, who felt uneasy about their bigger budgeted, more technically sophisticated film being associated with such a gleefully grassroots predecessor), the toothsome spectre of those extraterrestrial beasties looms large in Ron Cole’s design of Foster’s final mutation. A hulking, long-necked creature, it stomps around the Talos research facility as Metamorphosis‘ writer and director, Glenn Takakjian, shifts into full-on monster-on-the-loose territory during the film’s final third. Although alleviating the somewhat episodic feel of Takakjian’s otherwise neatly handled film (his first, and to date, only feature), the helmer’s dip into conventional B-movie etiquette doesn’t bode well for the mighty Viallini. However, the good ol’ doc’s fate was sealed the second he made the decision to deal with Foster’s calamity “within the confines of the establishment”. Because despite us never really knowing his background or what other nefarious goings on he’s involved in, Kane makes it pretty clear that there’s enough dirt out there to string Viallini up by the balls. It just happens to take a flesh-hungry, human-martian hybrid to physically do it…

So what of the actor whom plays this devilish part, Marcus Powell? Well, sadly, there’s barely any information about him anywhere. There is one certainty, though: the average heighted Powell here is not to be confused with the identically named dwarf performer from Willy Wonka & The Chocolate Factory (1971) and Time Bandits (1981) as IMDb do. A captivating continuation of the wicked authority figure schtick he mined in 1988’s Rejuvenator, Powell chews the scenery with swaggering authority; the baritoned British thesp stealing the show. From his rich intonation and lip-curling sneers, to his flamboyant handling of a pistol, Powell’s bravura performance is Metamorphosis‘ unquestionable, non-FX-based highlight; and the reason that, with ale in hand, those of you who haven’t should seek this enjoyably yucky potboiler out right away. 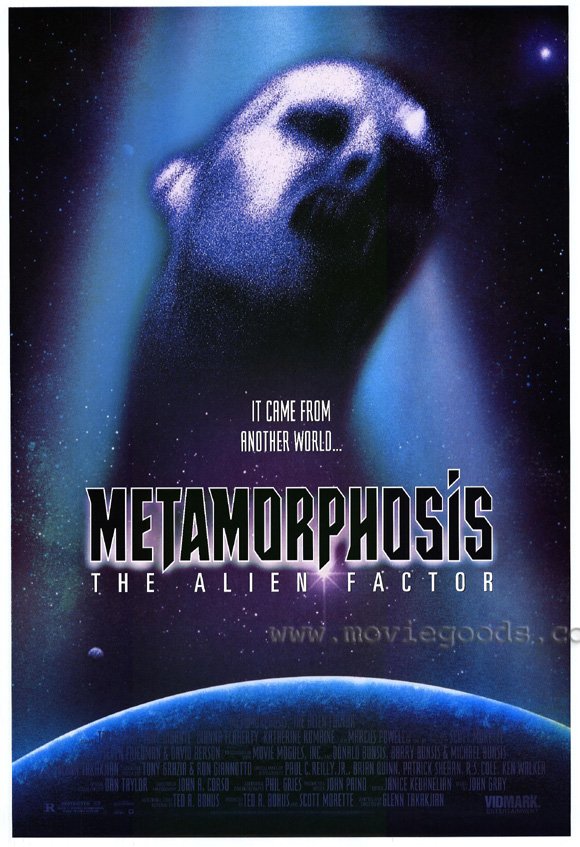