Because I live a life of debased solitude, I happen to pay a concerning amount of attention towards a variety of small-scale DTV labels and distributors. One that raised an eyebrow recently was Wild Eye Releasing, who since their creation a little under a decade ago, have acquired almost one hundred and fifty films. It’s a heady blend of seriously low budget schlock, the majority of which is pretty forgettable, but look hard enough and you may well discover something as insanely brilliant as SHARKENSTEIN.

Wait! Wait! Don’t leave! I know what you’re thinking. You’ve just shrugged it off as some asinine SyFy Channel movie haven’t you? It’s fine, I did the same. In fact I flipped over the case, caught sight of the seventy minute running time, and comforted myself in the knowledge that my pain would last only a smidgeon longer than an hour.

But then came the moment of revelation.

“Polonia Brothers Entertainment Presents” – Four magic words that instantaneously fended off any pending wistfulness, transferring it instead to child-like excitement. If you’re not familiar with the name, the Mark and John Polonia were trailblazers in the realm of shot-on-video movie from the late eighties to the early noughties. Beginning their career at nineteen with arguably their opus, Splatter Farm (1987), a partnership with Sub Rosa saw some half-decent distribution of their schlocky goodness, while they also had the crazy honour of Feeder being Blockbuster Video’s number one independent film rental of 1996!

Sadly, in 2008 John succumbed to heart aneurysm at the young age of thirty-nine, and while Mark’s output dipped significantly in the wake of this tragedy, it seems that now he’s as productive as ever with fourteen features in the last five years.

In Sharkenstein, we’re treated to a pretty snappy pre-credits black and white ode to Frankenstein (Polonia homages to their favourite movies are stuff of legend) which establishes that in 1942, a secret experiment to weaponise sharks was shut down and seemingly destroyed by the Third Reich. Fast-forward to the present day, and we find ourselves in the company of the alarmingly geeky Madge, Skip and Coop, who are headed out to Katzman Cove for a relaxing boat trip, but as they set sail on their aquatic excursion, it becomes apparent that something is stalking their wake.

“Worse than garbage!” screams a disgruntled IMDb user, but in my opinion you really have to have been neutered by the slick, soulless, polished inanity of the mainstream to not have a pang of appreciation for this unhinged craziness.

It’s goofy, it’s cheesy, it’s full of horrible (but in a kitsch way) CGI, but this is a love letter to Roger Corman’s classic sci-fi movies from the fifties, blended with a neat tip of the hat to Universal horror. Meanwhile, Hoskins the mute boat captain (played by Polonia himself) seems to represent the Silent Bob of mariners, while the fact the evil scientist still relies on a CRT monitor for his experiments, and the mutated shark seems more like an iguana all ensures that this is an insanely fun hour and ten minutes. It’s classic SOV in the age of sterile SyFy. Dig it! 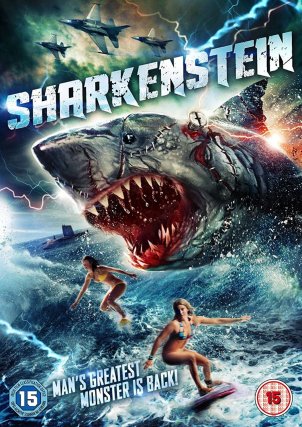 It’s a new Blumhouse DTV’er! So cue a few sentences on how the direct-to-video slate of the horror behemoth has been largely an inconsistent affair! From the sublime Curve to the predictably crappy remake hell of Martyrs, this ever-expanding label is at times in danger of showing all the consistency of Donald Trump hooked up to a polygraph.

With VIRAL they’ve pretty much come good in a taut little number from Henry Joost and Ariel Schulman, the directing team behind Paranormal Activity 3 and 4. Following the outbreak of a parasitic virus that wipes out the majority of the human population, Emma (Sophia Black-D’Elia) and her sister Stacey (Analeigh Tipton) find themselves separated from their parents as it reaches their neighbourhood. Quarantined with no connections to her family, Emma, with the help of her love interest Evan (Travis Tope), fights to protect her infected sister for the cause of her own survival.

Teaming back up with Christopher Lawson, the scripter who worked so effectively on their earlier films, has led to this Joost / Schulman picture being a deftly woven tale of disease, tension and sisterly love blended with some fairly icky parasitic-driven body horror. This, coupled with the brooding subplot of conjecture over the marital status of the girls’ parents ensures that this is a horror movie with a storyline to sink your teeth into, as it wrings out the tension in incremental doses with each passing minute, to leave you questioning why this never saw the inside of a multiplex.