There’s something seedily enigmatic about Vinegar Syndrome’s STOREFRONT THEATRE COLLECTION boxsets, the second volume of which has just landed on DVD. If you browse the latest twelve-strong assortment of hardcore quickies, the frequency of question marks punctuating the year of production, complete with ‘unknown’ taking the place of the occasional directorial credit, tends to perpetuate the grey overcoat and pulled down hat of anonymity more associated with the clientele.

Such mystery certainly adds to the excitement of watching this grimy medley of pornography, albeit the desire to soak yourself in a bath of neat bleach shortly after is a tough compulsion to let go. For those of you not au fait with the concept of the Storefront Theatre, Vinegar Syndrome inform us that throughout the early to mid-seventies, it was the most common way to see underground movies. Occasionally referred to as ‘mini-theatres’ or ‘shoebox theatres’, these small venues were often converted retail stores armed with nothing more than a couple of projectors and nailed down folding chairs.

While the first volume focused on features that graced Los Angeles’ PO-NO theatre, the second takes us two and a half thousand miles east to Pittsburgh, and into the wild world of the Bizarre Arts Theatre.

Having fallen in love with Vinegar Syndrome’s archaeological dig into the depths of the American Golden Age of pornography over the last few years, the vast difference between something like an Alex DeRenzy movie and a scuzzy slice of storefront shenanigans is as stark as comparing French New Wave to nineties SOV. Does that make the latter any less desirable or worthy of attention? Absolutely not, as although these hour long vignettes are low in quality, the majority make up for it with their whacked out insanity and foolhardy ambition.

The twelve features range from fifty-six to seventy-one minutes in length, and while there are a handful that veer towards forgettable rather than favourable, the majority provide a delicious window into the world of these quickies, most of which were shot over the course of one day. An example of the best of them is undoubtedly The Geek, a debased hour of cheap thrills from ’71 which finds six friends heading into the wilds of Oregon in a VW Campervan to find the titular character, a seven-foot hirsute wild creature. 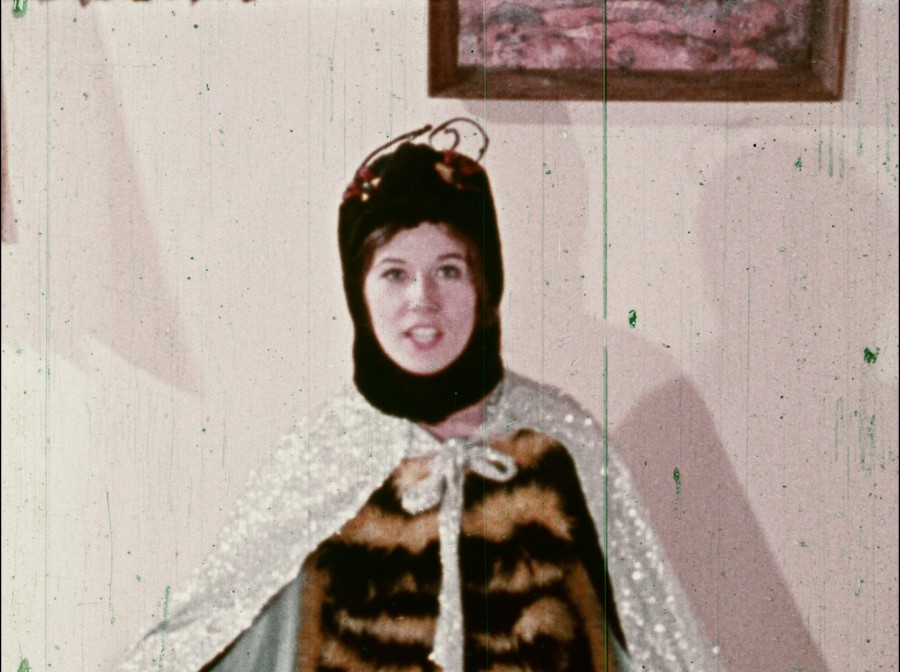 Unlike most of the other features on this set, The Geek has been available before – on Volume 4a of Frank Henenlotter’s Hardcore Horrors no less, from Something Weird Video. Irrespective of that, it’s an ideal opener for this Storefront Collection, as by the time you catch sight of the hairy beast, with dark coloured bathmats strapped to his thighs and shoe polish rubbing off all over his victims nether-regions from his blacked-up hands, you know you’ve found the level.

This collection of debauchery trundles on with the clunkily entertaining Hotter than Hell which finds the devil, dressed a little like a gay wookie, sending his two sons up from the bowels of hell to “Guarantee the corruption of mankind”, before the far more polished third feature, House of De Sade, described by one writer as ‘Cucumbers, Vampires and Nunchucks’, instantly becomes the stand-out piece of the compilation.

The Sorceress is up next, an hour where sex easily outstrips any narrative, while also managing to crib a sizeable chunk of Tubular Bells, before Cult of the Scorpion finds a girl tracing the seedy footsteps of her missing sister amid the hustle of New York. Dr. Sexual & Mister Hyde jolts you awake from a slight lull in proceedings with a very ambitious attempt at a period piece, although the harmonium score does begin to grate a little, while the sex scenes lack the urgency you’d hope for; most notably a lesbian sequence where the dialogue sounds like it was recorded during a lost distance phone call. But, all’s well that ends well, and a five-way carnal spectacular goes a long way to eradicate the monotony of most of this feature.

The chant of “Uranus is our love, enter my dark passage” powers through your surround sound at the beginning of Rites of Uranus, a ribald sixty minutes of anal-centric horseplay that belongs in crème de la crème of this compendium of smut. There’s a real artistic quality to many of the sex scenes, with a jet-black backdrop and writhing bodies glistening with moisture, not to mention the untold pleasure you get from the repetitive use of Uranus.

Waltz of the Bat continues this marathon of mating, and also comes with the advisory of being the one segment I’d advise switching from beer to hard liquor for, as it’s a frankly certifiable piece of celluloid insanity – and I mean that as a compliment. Count Fledermaus (accompanied with a Johann Strauss score) is a two-hundred year old Svengali who has the appearance of a bedraggled Coffin Joe. Bestowed with powers by The Bee, he abuses his privilege by luring innocent girls back to his lair and seducing them. Now, only the black and yellow striped drone has the ability stop him, and must do so by having sex with the Count before midnight, and thus begins a salacious race against the clock.

Perhaps the most surprising entry in this libidinous lot is Come Deadly, which tips its hat firmly in the direction of the Italian giallo, with its black-gloved clad killer and theatrical setting. Stagefright this ain’t though, as a Rorshach-looking scoundrel sets off on a spree of rape and murder, with a perturbed group of actors hunting him down alongside an undercover cop. Admittedly it’s a hammy little number that raises a giggle more than any degree of intrigue. You can’t fault its ambition though, and director Sam Weston’s hybrid of genres is a timely shot in the arm for the final leg of this lowbrow test of endurance.

Mania heads down the road of murder in an all-girls boarding school, but despite its initially lesbian-orientated escapades, it quickly descends into the well-worn template of predictability. What it does do for the first time in this set, and the same can be said for Daughters of Darkness that follows, is introduce a little racial diversity to what’s an alarmingly Caucasian collection of films. The latter should be lauded for more than just its multiculturalism, as instead of the archetypal porno-lead, we get Anthony, with a prim haircut, cherubic face and boyish features; he’s a startling shift from the moustachioed machismo that embodies the majority of these movies, and it’s all the better for it, not least due to the inclusion of some awesomely kitsch optical effects too!

We finish on more of a whimper than a bang, with Jim Turner’s 1973 film Unholy Child, where a sailor returns to shore to find his whole life turned upside down. It’s more filler than killer, but nonetheless, after twelve hours of concupiscent cinematic delights, it seems churlish to nitpick. After all, in my sweaty and markedly chafed palms, the opportunity to cradle this three disc wonder of rarities and assorted amorous adventures is a sheer delight of indescribable proportions.

For anyone with even the most passive interest in film preservation and pornographic rarities, this is an essential purchase; it’s a priceless peek behind a velvet curtain into a den of iniquity that’s perilously close to being lost forever.