Out on UK DVD this week, Dave goes wild for a hip indie scare-show.

In an alternate reality, BRAXTON BUTCHER would be a festival circuit veteran. It would have played FrightFest to a rapturous reception, while that cliquey core of questionably vaunted genre commentators would sing its praises on social media with the same frequency that they hail the cool kids like Adam Green and Ti West.

However, it’s one of life’s major irritants that writers, bloggers and the assembled Twitterati are prone to be a little fickle in their pursuit of ‘the next big thing’. Wave a screener in their direction, play it at FF or fire them a press release, and it’s essentially the attention-grasping equivalent of dangling a set of car keys in front of a baby.

For the orphaned children of genre filmmaking that don’t have a PR company to turn to, you have to wonder what hope they have of cracking that inner circle, because in the case of Braxton Butcher it’s the best British horror movie that I’ve seen in the last decade, and it’s on the verge of slipping under the radar.

Leo McGuigan’s film has no right to be this good. Shot way back in August 2014 when the director (and writer and editor and producer) was only nineteen, the fact that it clocks in at a potentially butt-numbing 111 minutes (a serious no-no in the world of low budget pictures) means you have something primed for failure. But not a shot is wasted, nor a line of dialogue excessive. In fact, it’s filmed with a level of confidence and a panache that some filmmakers will never exhibit in their whole career.

The synopsis is simple: Every town has its horrors, and for the small town of Braxton, that evil is Tommy Miller, a bullied teenager who reached breaking point and went on a killing spree. On the tenth anniversary of the bloodbath, the local teenagers in the hamlet find themselves being stalked by a hooded figure, which automatically raises the question of whether Miller has returned to kill once more.

You’d think that with McGuigan’s relative inexperience he’d have a weak spot, but I must admit if the flair of his shooting style was cause for immediate praise, then the tightness of the script creates an envy for another human being that I’ve rarely felt! In all seriousness, the Irishman manages to flit from teenage melodrama to fraught tension without breaking a sweat, while dropping in some casual winks at the genre (“Ready to be final girl?”) with consummate ease.

With forty speaking parts in the movie, the key players do take a little time to come to the fore, but prolonged applause must be directed towards Shaun Blaney who plays Det. Ryan Fenton, the lone survivor of the original massacre, while Jenna Byrne brings a real kick-ass presence as his niece Julie. Shout out also in the direction of Odhran McNulty and Brandon McCaffrey, who as the adorable Dean and Ronnie bring a little light relief, while Joshua Colquhoun as Ethan gets to deliver some sassy one-liners with great vigour – “That was too Scream 3. It needs to be more Scream 2.”

Left Films managed to acquire the rights for this after the premature demise of Gilt Edge Media (it’s US release is forthcoming via Wild Eye Releasing, albeit as ‘The Butchering’), and they’ve packed the disc with almost an hour of extra features that include an alternative ending, deleted scenes and Jim McMorrow’s buttock-clenching short Photobomb (2015).

Considering this DTV’er has no supermarket presence, and has been frustratingly out of stock at Amazon all week, you’re going to have to really make an effort to track it down. I implore you though, go discover Braxton Butcher via HMV (£7.99) or Amazon Prime (£3.49), and after you’ve agreed with everything I’ve written, go shake your fist at the genre trendsetters on social media for letting this slip though the net.

This movie deserves to be huge. 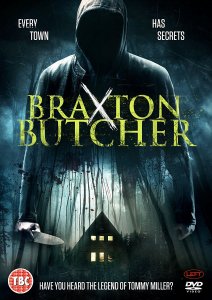 BRAXTON BUTCHER is out now on UK DVD, via Left Films