‘Tis the season to dust off those seasonal slashers and killer Krampii to curate a December packed with all your Christmas favourites. There was a real Post-Millennium lull of new festive frights to mix in with the classics, but that’s changed in recent years with such bauble-breaking madness that’s seen modern-day classics like A Christmas Horror Story (2015), Krampus (2015) and All Through the House (2015) etch themselves into your Ghoul-tide Advent Calendar.

This year sees the trend continue with FOUR newbies announcing themselves into the holiday horror genre; the first of which sees some Santa-based shenanigans in Southport thanks to the creative imagination of writer-director Stuart W. Bedford. My favourite slice of December-based depravity to come from my home county of Merseyside is undoubtedly Lawrence Gough’s perennially underappreciated Salvage (2009), and although BLOOD TIDINGS fails to match that in terms of taught thrills and blood-soaked mayhem, it’s still worth a look.

Sam Baker (Alan Mulhall) is your typical Scouse hero. He’s homeless, but manages to prioritise everyone else’s needs above his own, as he prepares his group of dispossessed comrades for life in their new digs. However, just as things seem to be on the up for this close knit band of outcasts, they become the target of three psychopaths in Santa suits, who are determined to wreak a little murderous mayhem.

I found the weakest aspect of Blood Tidings to be the three killers. Devoid of any real presence, and lacking in any pervading sense of menace, the film failed to carry any sustained threat or heartbeat-raising intensity. Having said that, I still found a great deal to admire, not least the location which allowed the film to enjoy such a broad canvas for a princely-priced picture. Alan Mulhall is a real stand-out too, crafting his character with layers of emotion and fragility, as we gradually get to learn a little bit more about the reasons for which he’s in this situation.

With a dash of social commentary regarding homelessness and addiction, plus an indictment on society in general, the politics of Blood Tidings are right on. It’s just a shame that the quest to make a good n’scary Christmas horror film didn’t quite work out. 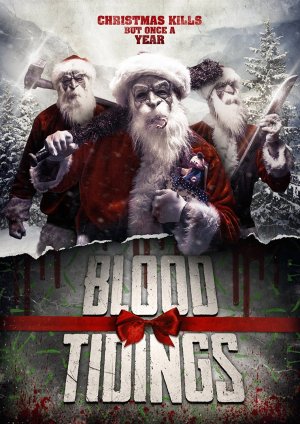 Staying in the UK but taking a trip down South to Colchester brings us to the latest from Proportion Productions. It’s been a busy year for the newly formed British outfit, with some genuinely decent genre fare in the shape of Darker Shades of Elise, Unhinged and The House on Elm Lake all pulling in some decent numbers in the DTV stakes.

Their latest is 12 DEATHS OF CHRISTMAS or MOTHER KRAMPUS as it’s known in the US. Directed by Elm Lake helmer James Klass, it’s based on the old German urban legend of Frau Perchta, the Christmas Witch, who for the twelve nights before Christmas would kidnap a child. In this tale of terror, the fable reared its ugly head as recently as 1992, but before the full compliment of kids could be taken, the locals banded together and took matters into their own hands.

Fast-forward to the present day, and single mum Vanessa (Claire-Maria Fox) is taking her daughter Amy (Faye Goodwin) to her Grandfather’s (Tony Manders) for Christmas. It’s a close-knit village, and it seems the perfect environment to forget about her ex and to enjoy the festivities. Something isn’t right though, and with the arrival of a mystery woman called Leslie (Michelle Archer), and the suspicion that her father may be hiding something, the true evil of this quaint village is about to reveal itself to Vanessa.

I never really understand the people who review a film whose budget is the cost of a day’s lunch on a Michael Bay movie, and they ramble on about the acting being average. Do they actually expect a queue of RADA-trained Thespians at the audition? I digress, but there’s little to complain about here with regard to the performances as they’re all uniformly decent, with Manders, Archer and Fox being the highlights.

If I did have to pick a fault, it would lie with the pacing; as with Elm Lake, it’s simply too long. The first half of the film suffers from a little too much repetition, as the narrative seems to stumble one step forward, then two steps back which has the knock-on effect of stifling any initial momentum. Irrespective of this, it’s still a very recommendable indie horror. There’s a fascinating multi-generational family dynamic at play that’s makes up the backbone of the story, while the occasional flight of fancy like the Becca Hirani babysitter sequence is immense fun.

By the time the villain of the piece staggers menacingly into shot, she brings forth a grisly ending that’s not afraid to go all out bleak and nasty! With an air of the original Woman in Black about her, it’s a satisfying climax that serves to paper over the shortcomings of Klass’s film, yet leaves with you with the overriding feeling that this is one seasonal shocker that you’ll likely take another look at next December. 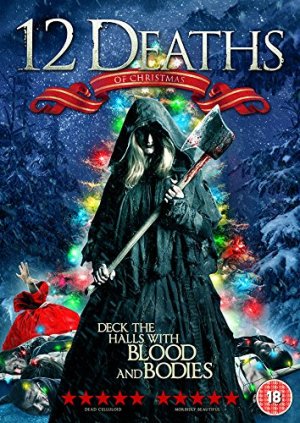 One of our co-writers on It Came from the Video Aisle! watched KRAMPUS: THE RECKONING and admitted that “It was so awful, I couldn’t even bring myself to talk about it.” Although it actually had a release last year in the UK thanks to Kaleidoscope Home Entertainment, it seems a good opportunity to chat about it now, as director Robert Conway has gone and made another one!

I’ll have to respectfully disagree with my colleague’s opinion regarding Krampus: The Reckoning, as I found it to be an entertaining, if flawed slice of micro-budget mayhem. Set in and around the world of Zoe (Amelia Haberman), a kid whose life seems to have been spent being passed around foster homes, we learn that she has the ability to summon the legendary demon Krampus, thanks to a replica voodoo doll that she keeps within reach at all times. With custody temporarily under the watchful eye of psychologist Dr. Rachel Stewart (Monica Engesser), it becomes a race against time to break Zoe’s homicidal urges.

I make no secret of the fact that Conway’s Krampus tales are cheap as diddly! So, if you’re heading in expecting something in the same ballpark as Michael Dougherty’s film then let’s knock that flight of fancy on the head. What Conway does deliver though is a cool spin on the psycho child scenario that manages to have a decent degree of character development, and rolls with enough zip to retain a vested interest in where the filmmaker decides to go.

I will say though that the most audible sigh of disappointment in Krampus: The Reckoning can be heard upon the appearance of the titular character as a poorly rendered CGI creation, so it was pretty cool to see him reinvented for KRAMPUS: UNLEASHED. Admittedly, that reinvention gave him the look of Phil the Demon in Chris Seaver’s Filthy McNasty (2002), but give me a dude in a mask any day over something computer generated.

It did strike me as a little odd that Conway’s second Krampus movie bears no relation to his first, but by the time we’re welcomed to the 1898-set prologue, Krampus: Unleashed soon rattles along at a decent pace as the beast is awoken by a demonic summoning stone. Fast-forward to the present day, and we’re sharing a rather awkward family Christmas with Will (Tim Sauer) and Amber (Emily Lynne Aiken) who have taken their kids to their parents place for the holiday season, and have to deal with the heinous notion of being cordial with Amber’s brother Dave (Daniel Link) and sister-in-law Vivian (Tori Osborn).

A rubber-faced rascal dispatching family members is more in the realm of slasher territory than anything else, but Conway’s descent into well-worn horror tropes is no bad thing. There’s a lot of characters here, which at times makes Krampus: Unleashed feel a bit like a shallow exercise in random carnage, but if I had to sum this seasonal sophomore outing from Conway up, then it’s a little like a nutzoid regional horror movie that you’d expect to find on a grainy Vinegar Syndrome compilation. To me, that’s a compliment of the highest order! 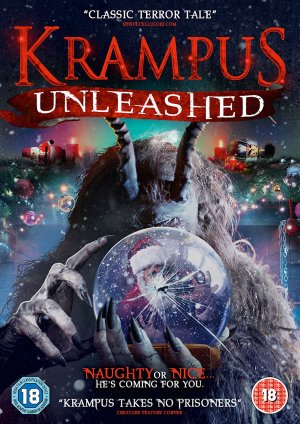 While the previous four movies in this weeks’ Junkyard have all had mediocre levels of exposure and press coverage, the inclusion of RED CHRISTMAS is a bit of a cheat as its multitude of reviews mean that it falls far outside the parameters of this column. Having said that, it’s such a cool movie that a couple of hundred words on it, just in case it’s passed you by, seem like a fitting way to round off this Christmas special.

Matriarch Diane (Dee Wallace) has invited her children over to celebrate one last Christmas in their family home. However, amid the celebrations and domestic drama, they receive a visit from a mysterious stranger. Disfigured and cloaked, they initially feel sorry for him, but as his stay continues it becomes clear that his motive is decidedly sinister.

Eggnog, mistletoe, aborted foetuses – such traditional Christmas fare! Craig Anderson has managed to take such a grim and unsavoury idea and blend it into a quite excellent Aussie horror movie. As with most of the other films this week, the dysfunctional family is a perfect base to set your story around, but Anderson’s triumph is to collect such a spectacularly diverse collection of people without teetering over the precipice of parody.

From Uncle Joe (Geoff Morrell), the laid-back pot-smoking dropout to the heroic Jerry (Gerard Odwyer), the snack-loving son with Down’s Syndrome, it’s a perfect mix between wacky and whacked-out. With the delightful Dee Wallace heading up the family with a steely determination for a perfect festive period, the assembled clan make for a delicious group to observe.

With Cletus the Fetus a shoo-in for the annals of great horror villains, considering his cloaked appearance and John Merrick lisp, he’s a mesmerising creation (or abortion?) that elicits both sympathy and utter revulsion. Anderson is a little heavy-handed on the vibrant red and green lit sequences in the final reel, but it’s a minor quibble about what will surely become an annual event for most horror aficionados.