There’s nothing quite like a new British DTV filmmaker in town to put a spring in the step of the Junkyard.

Actually, such a cherry-popping introduction might overshadow the fact that Derby-native Anthony M. Winson has managed to create a wealth of work over the last few years. The Devil’s Claw (2013) and Pumpkin Tales (2013) are examples of his short films, while compact features like The Witching Hour (2013) and The Haunting of Blaylock Residence (2014) straddle either side of the hour mark. Needless to say the burgeoning slate of Winson managed to catch the eye of fellow East-Midlander and Junkyard friend MJ Simpson, who caught the latter of those two features and commented how it was made with “Care, passion and an affection for the genre.”

UNHOLY marks Winson’s physical media debut and comes courtesy of the veteran DTV kings High Fliers. Set in 1975, we’re introduced to the recently married Peter (Simon Crudgington) and Margaret (Kelly Goudie) Eastwood who are viewing their potential first home with the assistance of an enthusiastic estate agent. “It seems cheap! What’s the catch?” remarks Peter as he learns of the price – a sign that we hardcore horror hounds know signals the beginning of an occupancy fraught with supernatural terror.

Home-based paranormal occurrences are certainly a major trend in horror right now. They’re relatively economical to shoot (Winson lists his Blaylock Residence budget as fifty quid on IMDb), while with the success of The Conjuring (2013) and its sequel is still fresh in our minds, there’s still an unquenchable demand for haunting hijinks.

For Unholy, Winson utilises both these aspects, by firstly filming this for less than the daily catering budget of the aforementioned James Wan movie – you only need to check out the end credits to count the crew-members on one hand. Secondly, he takes the bold step of shooting his film as a period piece. This is a really challenging thing to undertake, and it’s something that’s achieved pretty well thanks to the dated property he uses in suburban Nottingham, although I would question if it’s really necessary, because at times the antiquated aspects can be little more than a distraction.

Minor quibble aside, for the most part Unholy is a fair supernatural-themed DTV’er. To concur with Mike Simpson, it’s clear Winson has a love for the genre which is made all the more apparent with a sweet Race with the Devil (1975) reference. With the appearance of his very own Ed and Lorraine Warren in the shape of paranormal investigators Karen (Katie Richmond-Ward) and Michael (Carn Truscott), this tip of the hat may be plundering the box office behemoth a little too directly, but with personable characters and a brisk narrative, there’s enough to impress.

Even if the micro-budget charm of Unholy fails to be the fire of your loins, there’s a few sequences of practical and miniature FX work in the final reel that’s truly majestic, ensuring that despite some flaws, Winson’s film is certainly one to purchase. 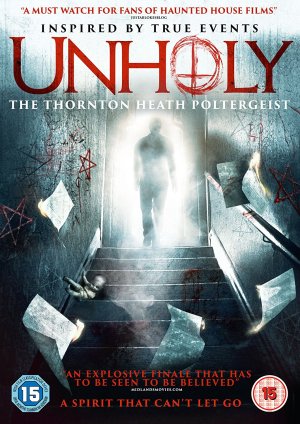 With my favourite Icelandic horror movie being Reykjavik Whale Watching Massacre (2009), perhaps I REMEMBER YOU didn’t have to try all that hard to take the frost-laden crown, but that it does and by quite a distance.

In the remote Westfjords of Iceland, a lady hangs herself inside a church. Here strange death leads to an investigation into a number of similar cases in the region. To his horror, Freyr (Johannes Haukur Johannesson) the new psychiatrist in town, discovers the deceased woman was obsessed with the disappearance of his seven-year-old son who went missing three years earlier. Meanwhile, across the bay in an abandoned village, three city dwellers are restoring an old house when supernatural an inexplicable events start to occur.

Oskar Thor Axelsson’s film is an exhausting watch, but for all the right reasons. With its two narratives running parallel for the majority of the feature, the director teases us with the manner in which they’re connected and when we’ll get to find out. The icy-blue vistas of his homeland are essential for creating the vibe of solitude that permeates the picture, while Johannesson is magnificent in creating his own personal isolation; such a richly drawn character whose obsession with his lost son is etched into his face with a heart-breaking sadness.

Though perhaps not a horror by definition, at its core I Remember You lies more in the realm of a dark, brooding drama; after all it’s essentially a tale about a missing child. Having said that, Axelsson’s film has the dexterity to dip its frostbitten toe into a number of genres. Littered with moments of claustrophobic intensity and tension-filled sequences that leave you fighting for breath, it’s a powerhouse of a movie that demands an audience, albeit one that can handle the despair and despondency that oozes from every scene.

Unholy and I Remember You were both released to UK DVD on 6th November by High Fliers and Studiocanal respectively.