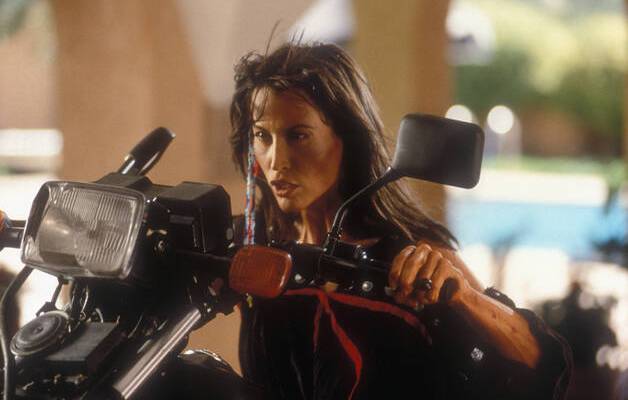 Matty explores one of Albert Pyun’s most criminally overlooked movies and details the impact its difficult making had on the helmer.

The first occurs just before the half-hour mark, when Ravenhawk’s hero, Native American avenger Rhyia Shadowfeather (Rachel McLish), drops one of the land-grabbing bastards who murdered her kin off the Glen Canyon Dam Bridge. The second is before Shadowfeather’s showdown with the film’s big bad, Phillip Thorne (William Atherton), when the ruthless business magnate’s slap-headed lapdog (Mitch Pileggi) plunges to his death following a clifftop chase. Both stunts were performed by Bob Brown — the venerable daredevil behind the amazing motorbike/chopper collision in Terminator 2: Judgment Day (1991), and a key collaborator of Pyun’s throughout the ‘90s — and coordinated by 2nd unit director/fellow Pyun perennial Jon H. Epstein. While no stranger to scenes of kamikaze spectacle, Pyun was reportedly so freaked out by the logistics of each three-hundred foot plummet — particularly the former, which boasted the added danger of being shot by a helicopter hovering only four meters away — that the usually hands-on auteur refused to be present during their execution. Instead, he anxiously communicated with Epstein via walkie-talkie until the jaw-dropping feats were — thankfully — accomplished without a hitch.

Again, the dives are incredible — and there’s a lot of other brilliant attributes to Ravenhawk, certainly enough for it to rank alongside Omega Doom (1996) and Kickboxer 4: The Aggressor (1994) in the pantheon of legitimately underrated Pyun flicks.

An appealing mélange of environmental concerns, existentialism and retribution, Ravenhawk’s plot — think a proto On Deadly Ground (1994) by way of Navajo Joe (1966) and High Plains Drifter (1973) — allows Pyun to indulge in his greatest obsessions, past, present and future. Beats, aesthetic ticks and thematic licks reminiscent and preemptive of everything from Cyborg (1989) and Kickboxer 2: The Road Back (1991), to Left for Dead (2007) and Bulletface (2010) lend the film an essentiality. Watching it, Ravenhawk (or, as it’s styled on screen, ‘Raven Hawk’) often feels like a vital yet ludicrously unacknowledged piece in Pyun’s sprawling creative tapestry. In line with the helmer’s casting of martial artist Kathy Long in Knights (1993); gymnast Kristie Phillips in Spitfire (1995); and bodybuilder Sue Price in Nemesis 2 (1995), 3 (1996) and 4 (1996), former Miss. Olympia McLish might not be an actress per se, but she’s a phenomenal physical specimen. Of Apache heritage in real life, Pyun presents her as a formidable force to be reckoned with; a thunderous warrior queen as dangerous and determined as Gibson Rickenbacker and David Sloan, just with a more mystical edge. It’s here, however, where Ravenhawk falters, albeit through no fault of Pyun.

Originally mounted at Kings Road Entertainment, Ravenhawk was conceived by producer Ron Samuels. Samuels and his business partner, gun manufacturer Jim Davis, had previously experienced success with the Iron Eagle (1986) series. The impresario was keen to launch another action movie franchise and figured a vanity vehicle for his new wife, McLish, was the perfect way to do it. He hired Iron Eagle scripter Kevin Elders to pen Ravenhawk’s screenplay and Kings Road recommended Pyun for the director’s gig on the strength of the stellar jobs he’d done for them on Knights, Brainsmasher… A Love Story (1993), and the Kickboxer (1989) sequels. Alas, Samuels and Pyun repeatedly clashed. Samuels wanted a female Rambo. Pyun wanted ambiguity. In Pyun’s mind, the events of Ravenhawk could be interpreted as either real, supernatural, or An Occurrence at Owl Creek Bridge-inspired death fantasy.

When Ravenhawk finished shooting, Samuels barred Pyun from the editing suite and supervised the cutting himself. The mogul then recruited Michael Schroeder — who, in an amusing twist of fate, had recently completed Cyborg 2: Glass Shadow (1993) — to cobble together a few additional sequences. The end result is a film that’s simultaneously brilliant and jarring. An intensely personal text reshaped by committee.

A square peg in a round hole.

For Pyun, the Ravenhawk debacle was the straw that broke the camel’s back. Fed up of his films being tinkered with (also see: The Sword and the Sorcerer (1982); Radioactive Dreams (1985); Cyborg; Captain America (1990); and, even, Knights), the filmmaker threw in the towel as far as working for hire was concerned. He refused to watch Ravenhawk’s final cut, exactly as he refused to watch Brown and Epstein’s falls. This time, though, he didn’t wait around for an all-clear. Craving greater artistic control, Pyun formed his own shingle, Filmwerks, with Ravenhawk’s line producer Jessica Budin; frequent collaborator Tom Karnowski; and Brian Yuzna’s old china Gary Schmoeller. When Ravenhawk was acquired by MDP Worldwide in summer 1995, Pyun and the Filmwerks contingent were busy with their sixth feature, Adrenalin: Fear the Rush (1996).

Initially slated for a market screening at the London Film Festival in October ‘95 but pulled when MDP couldn’t ship a print over, Ravenhawk debuted a few weeks later at MIFED in Milan. Eventually, it premiered stateside on Saturday 20th July 1996 on HBO, snugly nestled between the network’s screenings of Under Siege 2: Dark Territory (1995) and Lethal Weapon 2 (1989). By then, Pyun and Filmwerks were locking their ninth project, Blast (1997), and prepping their tenth, Mean Guns (1997).