Surfacing on video in late ’87 courtesy of Vestron, PARTY CAMP has rarely been seen since. Granted, it’s little more than a derivative amalgamation of Ivan Reitman’s Meatballs (1979) and Jeff Kanew’s Revenge of the Nerds (1984), but it’s a likable film and a successful one too, as director Gary Graver recalled in 2004:

“I shot that on schedule, on budget, and I stuck to every line of the script! It was a really big hit on VHS and cable too, so much so that the producers got a million dollars to film their next picture. Did they call me? No…”

Though clearly not enamouring themselves to the prolific Mr. Graver, producers Colleen Meeker (wife of Ralph) and Mark Borde knew they’d hit upon a successful formula a few years prior, and ironically it was with Chuck Vincent behind the camera; another director who occasionally ventured into adult movies, albeit with far less artistic endeavour than Graver. Though hardly a box office draw, Summer Camp (1979) emphasised that goofy behaviour and a dollop of sex equates to home video prosperity. Indeed, Meeker and Borde would again hire Vincent for the equally formulaic Hollywood Hot Tubs (1984). Shot by the legendary Larry Revene (who, highlighting the never-ending connectivity of B-movies, had previously hired Graver as cinematographer on the recommendable skin flick, Wanda Whips Wall Street (1982)), it’s a clear step up from their first outing, although neither comedy matches Party Camp in terms of charm, humour, and general amiability.

Jerry Riviera (Andrew Ross, in his only feature role) is a lost soul looking for inspiration, when he hatches a plan to get a gig as a counsellor at the nearby Camp Chipmunk – ‘Where the best is still not good enough’. A party animal at heart, he finds the regime there a little more authoritarian than he expected, due mainly to the whip-cracking leadership of Sarge (Peter Jason in a remarkably shiny helmet), and a group of preppy rascals corralled by the tiresome Tad Whitneyworth (Kirk Cribb). Crushed by the regime, and with his eye on the gorgeous Heather Morris (Kerry Wall), he recruits a merry band of misfits to rebel against authority.

The script from Paul Brown (who’d return to all things summer camp by penning Disney’s tween-baiting Camp Rock (2008) and its sequel) is prone to a few misfires, but the brisk pace of the picture ensures that those moments don’t linger. Meanwhile, there’s enough class in the ensemble thanks to folk like Jewel Shepard (who’d pop up in Graver’s Roots of Evil (1992)) and April Wayne (as Nurse Brenda, with her uniform perennially unbuttoned), that it’s never boring. The Squirrels (Jerry’s oddballs) bonding chant of ‘kum ba yah’ is as endearing as it repetitive, while there’s also more short shorts on display than the 1986 FA Cup Final.

It peaks, unquestionably, with a pitch perfect Friday 13th (1980) parody during a strip poker session around the campfire, and although you’d class this as strictly a meat and potatoes job for Graver (who takes both the director and cinematographer roles), it still possesses a greater cinematic edge than most of its contemporaries. 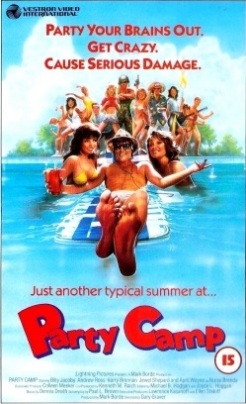