A new film from the director of the Hammer classic Vampire Circus (1972)? Indeed, the now Octogenarian filmmaker, Robert Young, who directed among other things Fierce Creatures (1997), the criminally underseen Captain Jack (1999), and co-lensed The Ninja Squad (1986) with Godfrey Ho, returns with Curse of the Phoenix, or, as it’s been generically retitled for the UK market, GHOST SHIP.

Josh (Joseph Sentance) works on the HMS Phoenix giving guiding tours, and acting in recreations of events from Plymouth’s maritime history to keen audiences of kids and tourists. While out jogging, he catches the ghostly sight of a woman falling to her death from one of the city’s oldest bridges. Leaping into the water, he tries in vain to rescue her, which sets off a strange chain of events as he becomes haunted by an apparition who believes that he is her lost love.

Young’s film is a strange tale. Scripted by the veteran Hugh Janes whose acting credits range from Dixon of Dock Green to Ripping Yarns, it’s a movie that feels as though it should belong in another era, such is its usual tone that’s in stark contrast to much of today’s fare. But, there’s no shame in being different, and if there’s a shoo-in of a shallow plaudit to bestow upon it, it’s that of being satisfyingly likeable.

Sentance plays Josh with a naïve innocence that’s nothing if not endearing, and at times Ghost Ship manages to clone the vibe of a classic BBC Ghost Story blended with contemporary drama, though the narrative is liable to stretch the boundaries of plausibility beyond even an acceptable horror movie rationality.

The new artwork and title might succeed in shifting some units, but I’d wager a bet that most people picking it up won’t really know what to make of this old school tale. By the time its black and white, split screen, period-based finale comes around, you’ll either be subtly impressed or reaching for your receipt. I think I’m in the camp of the former, but only just.

Bradley Stryker’s gone on to a whole host of acting gigs, but to a small group of us, he’ll forever be the slightly devilish buff guy in David DeCoteau movies, The Brotherhood (2001), Final Scream (2001) and Wolves of Wall Street (2002). In LAND OF SMILES he makes his feature length directorial debut in a movie that continues UK distro Gilt Edge Media’s ongoing habit of picking up a whole host of curios from ITN Distribution.

Abby (Alexandra Turshen) isn’t having a great time. She’s just caught her boyfriend cheating on her, so decides to head off to Thailand for a spot of backpacking where she meets Ben (Keenan Henson), who’s making a documentary, and Jewel (Caitlin Stryker) who’s recently joined him on his journey. It seems as though Abby has landed on her feet, but when a series of videos come her way, threatening the safety of her best friend Penny (Krista Donargo), her jaunt in this idyllic location becomes a living nightmare.

I must admit, I am partial to a good backpacking-themed horror movie, with luminaries like Turistas (2006), The Ruins (2008) and A Perfect Getaway (2009) all close to my heart, so when I saw Markus Mueller’s gorgeous cinematography here I was truly impressed. For a low budget movie it looks a million dollars, choc-full of dreamy vistas that really capture the best of Thailand. If only the rest of the movie matched its artistic perfection.

A little harsh perhaps, but there’s a number of things about Land of Smiles that are desperately frustrating, with the guy in the clown mask being front and centre. Here’s someone who’s essentially asking for a ransom, but his speech is completely unintelligible; I’m not exaggerating here for critical effect either, it’s simply impossible to understand one word. Having said that, the whole notion of a clown-masked kidnapper is at odds with the location. The movie could have been relocated verbatim to backwoods Indiana with minimal changes, which makes you wonder why something more pertinent to Thailand or backpacking wasn’t introduced as the sinister hook. It would have improved it immeasurably. 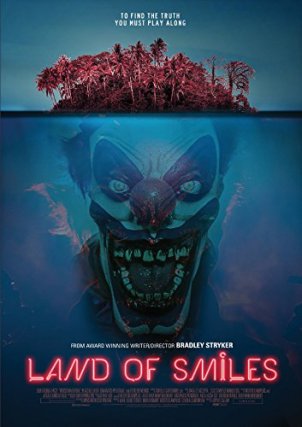 There’s nothing quite like the term ‘slow burn’ to put off the fair-weather horror fan, and DOOR TO THE OTHER SIDE certainly falls into that bracket. Bail at your peril though, because Norman Lesperance’s film is actually a small-scale success, thanks in no small part to a terrific leading performance from Mitch Holden.

Tim (Holden) lives as an agoraphobic, and except for visits from his psychologist or his kindly neighbour Nick (screenwriter Nicholas Bianchi), he has successfully cut himself off from the outside world. When he learns that he’ll soon be evicted from the sanctuary that he’s created, the very fabric of his sanity begins to fall apart. Strange things begin to happen, as the pressure of re-engaging with the outside world that he left behind starts to mount.

Aside from a brief pre-credits sequence, the first twenty-five minutes of Door to the Other Side are spent solely in the confines of Tim’s house. With its windows blacked out with newspaper, and every phonecall screened, you really begin to grasp the desperate nature of his situation. The narrative soon makes room for his neighbours Nick and Joan (Chelsea Gilligan) to breathe, which succeeds in adding a broader dimension to the root cause of Tim’s vulnerability, and Bianchi’s script is adept at gradually placing the pieces of this jigsaw slowly into place. The feature does lose a wee bit of momentum and direction in the final two reels, but succeeds in tying its loose ends together just in time to provide a satisfying conclusion to a very cool indie horror movie.