When you’re mulling over the greatest ever ornithological horror and suspense movies, there’s really little point in continuing the debate past a 1963 masterpiece shot by the guy with the most recognisable silhouette in movie history. On the flip side however, the entries for the most heinous beak-based schlockers are many, with the Alan Smithee directed ‘sequel’ to Hitch’s film, The Birds II: Land’s End (1994), undoubtedly the reigning master until James Nguyen offered us Birdemic: Shock and Terror (2010).

While TERROR BIRDS lacks the sheer awfulness of the aforementioned cinematic abortions, as well as the ubiquitous colon, it’s still a slice of head-shaking crud that’s saved by a gnat’s whisker from the fires of DTV hell thanks to a performance of scene-chewing mastery from z-grade icon Greg Evigan.

When a scientist learns of a legend about monstrous birds while on an expedition, he sets off on a journey to find them. He discovers two ten-foot winged creatures, long thought extinct, captures them and takes them back to Texas. When Maddy (Jessica Lee Keller) and her friends enter his ranch looking for her father, who’d gone missing some days prior whilst birdwatching, they discover that the terror birds have not only escaped, but they’ve also discovered a taste for human flesh.

Director Sean Cain made his name with some fine editorial work on the lush supplementary materials that adorn all those fine Scream Factory Blu-ray’s of our favourite films, before grabbing hold of the megaphone for features that ranged from the deliriously trashy (Silent Night, Zombie Night (2009)) to enjoyably hokey (Jurassic City (2015)). Terror Birds though is missing the schlock-factor from both those features, perhaps due to Cain not being on scripting duty, as screenwriter Jake Helgren, who has a barrage of Lifetime Channel movies under his belt, plays it safe with this collection of goofy kids with their Scooby Doo-esque utterances; “Hey man, we’re college kids not terrorists!”.

Bless Evigan then for adding a little meat to the sandwich, but also direct a nod of appreciation over to Rob Zombie favourite Leslie Easterbrook who brings a much needed, if brief, mature edge to proceedings as Dr. Slater. Cut-price CGI may be the order of the day here, but props to the design team who have actually created a… ‘unique’ looking creature that looks like the mutant offspring of a turkey and a dodo, albeit with a prehistoric lilt. Such kooky shenanigans are a welcome distraction from cringy dialogue and generic young cast, but as a midnight movie watched under the influence of whatever substances you have on tap, it’ll just about do.

I have to say I was kind of looking forward to Norman Lesperance’s movie, Reclusion (2016). Amazon, in their infinite wisdom were instructing me that the title released as THE HAUNTED from 4Digital, with its oh-so-original artwork cribbing of The Cabin in the Woods (2012) was his film in another more sales friendly guise. Alas, they’d got this a little wrong, as for Reclusion, read instead Zack Ward’s Restoration (2016); close I guess.

Many of you will know Ward from his acting credits which stretch right back to Bob Clark’s A Christmas Story (1983). Restoration though is his first venture into the director’s chair which sees him collaborate with the prolific James Cullen Bressack on the screenplay, centring around Todd and Rebecca Jordan, who have just moved in to a new home. While renovating their abode, the couple discover an old teddy hidden behind the fading plaster walls. Inside this fluffy bear they find a diary, hidden for over thirty years, which once opened releases the ghost of a tortured little girl.

Bland is the overriding impression I took away from Ward’s film; neither great nor terrible, it straddles that mediocre category of instantly forgettable. There’s good stuff here too, particularly in the casting, with Emily O’Brien and Adrian Gaeta fine as Todd and Rebecca, although Ward himself steals the picture as their invasive neighbour Harold, who along with his wife Francine (Sarah Ann Schultz) have a habit of turning up at their new acquaintances pad to randomly cook breakfast and such like. When the picture heads into its second half, any intrigue that it established early on begins to wane, as it stumbles to a resolution that feels both excessively drawn out and far too predictable. What’s essentially a small scale four-hander is devoid of the vitality it needs to hold the audience, and thus becomes a feature I’d struggle to recommend. 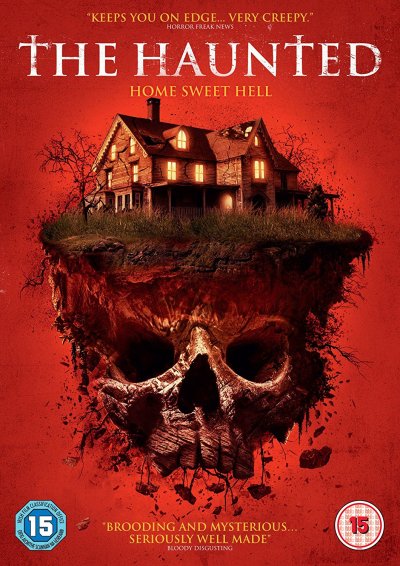