“It’s genuinely the very best new film that we’ve released” swooned 88 Films this morning over FOOTSOLDIER, the latest movie from fellow East-Midlander Steve Lawson. The cold-hearted cynic among you may be quick with a retort that suggests it has little competition in the way of quality, after all, supermarket sludge like Paranormal Captivity: The Haunting, The Pigman Murders and The Spanish Chainsaw Massacre were ten floors below bargain basement awfulness; but, credit where it’s due, and Footsoldier aka Survival Instinct comes heartily recommended.

After five years in prison for a violent assault, everyone knows not to mess with Weaver (Andrew Coughlan), especially his stepson Rex (Sam Smith). But, when an innocent couple accidentally cross paths with Weaver during an illegal hunting expedition, all hell breaks loose and Weaver’s rage is unleashed again – except this time, he’s armed and dangerous.

Fresh from his micro-budget, yet craftily worked Dinosaur picture Killer/Saurus which was also released by 88, Footsoldier takes Lawson into cat and mouse territory governed by a psychopathic fruitloop played totally on point by Coughlan. He’s a fascinating character, his mental state seemingly led by a desire for dated gender roles – “Kids today are so effeminate. TV is full of gays. So many women teachers”. Such misguided thoughts lend the film an eerie plausibility as we watch him trudge through the Derbyshire countryside, determined to make a man out of Rex.

Made for the cost of John Travolta’s toupe glue budget, Footsoldier’s limitations are occasionally evident in moments of clunky exposition, the occasional cliché “Look, I have a flashing battery symbol on my phone”, and at times the dialogue is a little hollow and echoey where they’ve looped it in post. Having said that, it’s nothing that would lower your respect for what I found to be a well-shot, perfectly-paced and grippingly taut British film that will hopefully find an appreciative audience with the wide distribution that it’s received this week.

The Asylum have multi-mile long queue of detractors, and perhaps they’re not without some justification. Nevertheless, I’ve always admired the way they promote from within, something their latest film, ZOOMBIES, epitomises perfectly. Lensed by Glenn Miller, he’s been on first assistant director duty for a number of years with David Michael Latt’s outfit, most notably on Sharknado’s two and four. Meanwhile, screenwriter Scotty Mullen has primarily been on casting duty of late, with pictures like Dead 7 and Independent’s Day (great title). This is though their sophomore film together, having previously united for The Coed and the Zombie Stoner.

Just days before the Eden Wildlife Zoo’s grand reopening, a monkey begins exhibiting signs of a strange virus which makes the animal extremely aggressive. When an effort to save it fails, it confounds the laws of nature and returns as a terrifying zombie monkey, killing its handlers and infecting others of its kind. As the newly-undead Capuchins break free and rampage through the enclosures, the viciously attack the other animals and spread the contagion. As the whole zoo rapidly becomes infested with these abominations, the zoo keepers find themselves under siege and outnumbered, fighting hard to stop the outbreak before it escalates.

“It’s a zoo, not Jurassic Park” announces a character early on, although with the Spielbergian John Williams knock-off that welcomes us to Eden Wildlife Zoo, you’d be forgiven for not giving the DVD case a cursory glance just to check you picked up the right movie. Then again, you could just wait for the first scenes of CGI to pop onscreen, and that will immediately offer reassurance that you’re in the land of Asylum! The notion of analysing this like a regular horror movie is largely redundant given the number of you who simply won’t watch it given its origins, which is a shame as this is genuinely one of the best to come from the LA studio’s conveyor belt of schlock.

You’re hardcore if your bottom-lip doesn’t quiver at the sight of these cute little monkeys scampering around like rabid primates, and despatched with blood-soaked fury. Like a demented version of Born Free, I have to say this eighty minute wonder contains some trippy shenanigans even for these masters of monstrous goings-on. If you know what to expect, you’ll no doubt sink a few alcoholic beverages and enjoy this movie in typical fashion. If you’re not enamoured by The Asylum, will this change your mind? Probably not, but if you channel surf through to SyFy one evening and Glenn Miller’s movie is playing, I defy you not to hang around a little while and get drawn in by the sheer cacophony of onscreen madness taking place before your eyes! 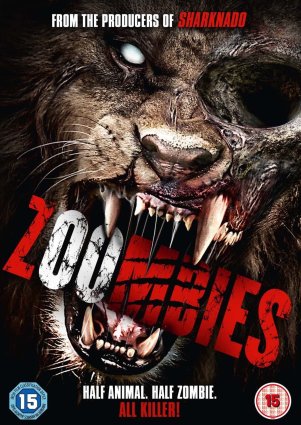